Politics and music certainly do mix. Mostly when it’s the latter waxing lyrical on the former though. Artists like Bob Dylan, Creedence Clearwater Revival, Joan Baez, Marvin Gaye, Rage Against The Machine and Public Enemy (countless others as well) have all made long and prosperous careers off of their politically-charged music in the US. Closer to home we have artists like Paul Kelly, Yothu Yindi, Midnight Oil, and The Smith Street Band who have done exactly the same (and countless others as well).

And it works, because these artists and their music serve to give a voice to the voiceless, oftentimes capturing the feelings of the common citizen perfectly. We recently outlined the success of Kendrick Lamar‘s Alright as a political anthem when it was chanted at rallies in Washington, D.C.

It’s when politicians try and be hip and use popular music in their campaigns that things get a bit dicey. Unintentionally hilariously dicey. And sometimes a little awful and tragic. Here are some of the most baffling song choices for political campaigns ever made: When confirmed zombie Bob Dole ran for President against Bill Clinton and Ross Perot back in ’96, he decided that he would put forth an honest campaign based on a solid foundation of jokes. Dad jokes. Awful dad jokes. Which is why he decided that taking Sam And Dave‘s 1967 hit Soul Man and tagging ‘Soul’ out for his surname because the two rhymed was a proper good idea.

How’d that go you think?

Well for starters, terribly. Soul Man was written by David Porter and Isaac Hayes (yep, Chef from South Park) in the middle of the African American Civil Rights struggle, the song a proud anthem about rising up out of one’s shitty circumstances. A song meant to empower African Americans everywhere. It was fiery and full of attitude and it was absolutely brilliant, and here we have an over-privileged old white guy from Kansas, who wouldn’t know struggle if it turkey slapped him in his withered old jowls, appropriating it for a political campaign because it conveniently rhymes with his surname.

Unsurprisingly, both Sam and Dave were suitably pissed about this (as were a lot of other people), and went so far as to demand $100 000 in damages for every time Dole played his version of it.

How big a douchebag do you have to be for an artist to decide that you’re damaging them financially just by playing their music?

We’ll chalk this one up perhaps to being a little lost in translation? As the Chancellor of Germany, a position she has held now for an entire decade, Angela Merkel is one of the most powerful women on the planet. That doesn’t stop her from making the odd mistake here and there though, not one bit.

In her re-election campaign back in 2005, she decided to run with a Rolling Stones number. Who wouldn’t? They’re a Hall Of Fame rock and roll band, they’re the epitome of longevity, which is definitely something you want in a political career and they have a whole discography full of hard rocking tunes that would probably go alright as a curtain raiser on a campaign tour. Which one did old Angela pick?

Of course. Of course she picked Angie.

I mean, it’s a great, great song don’t get me wrong. Released back in 1973, it was a huge hit for the Stones, as was just about everything they even breathed on. Here’s the trouble though: it’s a break-up song. A break-up song about a woman named Angie. One who Messrs Jagger, Richards and co. certainly weren’t gushing over in that song. Just some of the lyrics:

“With no loving in our souls, and no money in our coats/You can’t say we’re satisfied…/All the dreams we held so close seemed to all go up in smoke/…Ain’t it time we said goodbye?”

She was the incumbent Chancellor at this point, so, you know, using a break-up song in her political campaign is about as awful as foreshadowing goes. Didn’t matter in the end though, Germany didn’t give her the flick and she’s still going strong in office today, hopefully making better song choices come election time!

As far as political campaigns go, it’s more a demonstration, I’m aware, but I’m still going to use it as an example.

On our own shores, right-wing nationalist groups like Reclaim Australia and the United Patriots Front are inherently awful. Aside from being general shitbags, they’re also often abhorrently, undereducated-ly racist and xenophobic as all get out. Their political message, what little you can discern from the awful spelling and non-existent grammar of their mandatory caps lock rants, is basically a roundabout explanation of a ‘Fuck Off, We’re Full’ bumper sticker.

So when some of the loud and obnoxious troglodytes of Reclaim Australia decided they’d care to have a bit of a meet up and a good old fashioned bogan yell at people who look foreign earlier this year, one that had all the intelligence and subtlety of a YouTube comments section, they wanted to make sure that everyone else in Australia got the bloody message. They’re not ‘racist’ or ‘bigoted’ or ‘FUCKEN ZENAFOBIC’, they just love the utter Christ out of Australia and don’t want anyone who doesn’t look or talk like them playing silly buggers in their beautiful country, ya hear?

Nothing but the most Aussie song of all time would reinforce that message of course. Cue up the inimitable sounds of Cold Chisel and their 1978 smash hit Khe Sanh. It’s one of the most important songs in Australian music history. A song that is iconically Australian in every facet.

A song about a disenfranchised Vietnam veteran drifting aimlessly around Australia and South East Asia and dealing with his crippling PTSD by taking lots of hard drugs and having lots of casual sex.

We’re uh… we’re not sure how that story is in any way cohesive with yours, Reclaim Australia. Cold Chisel frontman Jimmy Barnes wasn’t having a bar of their nonsense, demanding they stop playing any of his or Cold Chisel’s music at their gatherings immediately and denouncing whatever message they were trying and failing laughably to get across.

Given that he is himself a Scottish-born immigrant to Australia who then married his wife Jane, originally born in Thailand, you can see why the people of Reclaim Australia might piss Barnesy off just a little.

2. Saddam Hussein: I Will Always Love You 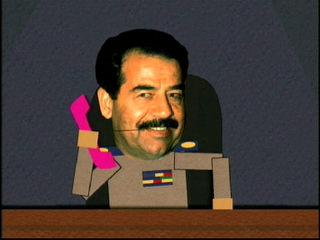 There’s nothing I can really say that will truly get across how utterly surreal this would have been, but yes, Saddam Hussein had a Syrian pop singer’s cover version of the hit ballad by Dolly Parton (and later an even bigger hit ballad by Whitney Houston) as his official campaign song back in 2002.

His idea of subtle and strategic placement was to just blast it over Iraqi airwaves night and day, as though that wasn’t cruel and unusual punishment. The artist whose cover was used, Mayada Bselis, does an admirable job chanelling her inner Whitney here, but there are only so many listens to a song about a respectfully terminated romance being misappropriated to musically represent a murderous dictator that one could take before you’re left wishing you had an incurable case of tinnitus. It doesn’t matter if you Google Image search ‘Donald Trump slimy’, ‘Donald Trump dirtbag’ or ‘Donald Trump awful’, the results will be exactly the same as just searching ‘Donald Trump’. Donald Trump says things that even Pauline Hanson would find in poor taste. The next time Donald Trump calls a woman something derogatory, the dictionary are going to mark the occasion by replacing the word ‘misogyny’ with his picture. Donald Trump’s proposed foreign policies read like a list of rejected Onion headlines. Donald Trump looks and acts like the villain in a movie where the hero is a dog. Donald Trump is what a lizard person would look like if they stopped giving a shit about concealing their identity.

‘You fools, this isn’t even my final form. It’s gonna be yuge’.

All hyperbole aside, Donald Trump is the absolute worst. And he doesn’t even realise that he’s the worst. And so pretty much everything he does subsequently has an air of tragic comedy behind it. Especially his choices of campaign music.

Donald Trump changes campaign songs probably more often than he changes socks (or sheds his outer skin). This isn’t because he’s the kind of degenerate song skipper you wouldn’t put an aux cord five feet in front of, but because every time he tries to use a song in his current Presidential campaign it’s usually wildly inappropriate and the artist wants straight nothing to do with it. Here’s some he’s tried:

There was Rockin’ In The Free World by Neil Young. A song that originally railed against the changes brought on by former Republican President George Bush Sr.’s election when it was released back in 1989 and then became the unofficial anthem for the demise of Communism when the Berlin Wall fell.

Unless you interpreted Neil Young’s original to be a middle finger to poor people in developing nations, this song has approximately zip to do with anything Donald Trump is about. His ‘bomb everything in Syria and steal their oil’ policy he actually outlined with a straight face (possibly because it can barely move anyway) is the polar opposite of a free world really. Neil Young is one of the most anti-Republican musicians going to boot and he of course told Donald to cut this the fuck out.

Trump also gave It’s The End Of The World As We Know It (And I Feel Fine) by R.E.M. a red hot go too. A song that’s about everything and nothing at the same time, full of apocalyptic themes and stream-of-consciousness nonsense lyrics that are somehow brilliant. It’s a feel-good track to the ear and what he was probably going for was a ‘things are gonna change around here’ kind of vibe, but when people are literally terrified that your successful election would bring about the fulfillment of the Mayan prophecy then perhaps you’ve chosen the wrong campaign song, hey Donald. Michael Stipe put a swift and merciful end to this one too.

And of course, Dream On by Aerosmith. A song about the common man (who has nothing in common with Donald Trump in any way apart from the fact that you can be poor and still a racist misogynist too) rising up and achieving his dreams. Well, if Donald Trump rising up out of the utterly squalid nightmare of being a New York City real estate developer’s son, inheriting his parents’ company and fortune and using it to try and achieve his dream of being the worst President of all time doesn’t exactly fill you with inspiration, I don’t know what will.

Steven Tyler and the Donald are even reportedly friends and he still wasn’t about to have his music within a ten-foot clown pole of him. Watch Trump doing the most cringeworthy air drums in the history of hands to it and you’ll understand partly why.

No word yet on whether even Chris Brown wouldn’t let Donald use his music. I’d really just be all for politics keeping its filthy talons off of music henceforth though. It’s for the best.