The US media’s portrayal of African Americans has traditionally been marginalising at best, and completely and utterly racist at worst. Feeding into this seemingly never-ending cycle of cultural abuse most recently is The Ellen DeGeneres Show, who inexplicably thought it was a good idea to do a parody of Nicki Minaj’s new sitcom. And while we aren’t exactly the biggest fans of pop-infused sitcoms, this is really out of line.

The tasteless skit, which some are calling a ‘modern-day minstrel show’, depicted a young actor portraying Minaj with an enormous fake butt interacting with her family members – also wearing fake butts – in the humorous sitcom style reminiscent of The Cosby Show (not something you want to be compared to). The young Minaj bends over to give everyone a clear view of her bottom and the family members all manage to accidentally knock things over with their giant arses. 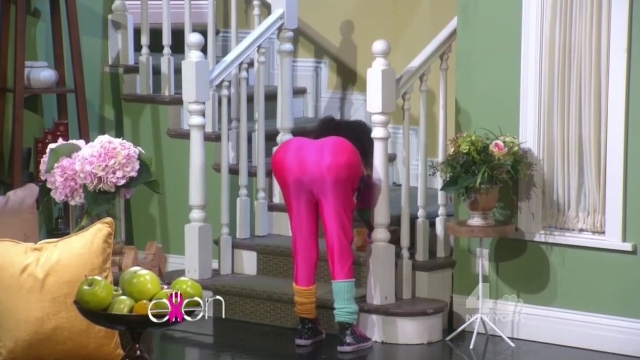 The epitome of cultural sensitivity

Naturally the internet, especially Black Twitter, was up in arms about the whole thing, calling it racist and feeding into the culture of body-shaming black women. Degeneres is hardly a figure shrouded in controversy, and her and Minaj have had a very amicable relationship in the past, including several appearances on the show over the course of her career.

This isn’t the first time Degeneres has parodied Minaj, dressing up as the singer as well as mimicking her in her Anaconda video. But honestly, how could anyone at the The Ellen DeGeneres Show have thought this was a good idea?

For starters, any commentary around Minaj’s posterior is always inherently sexual. So to attach a fake bottom to a young girl is sexualising her in effect. Sexualising a young girl for television entertainment is disgusting. Young girls are already hyper-sexualised enough in the media and attaching an enormous fake arse to a little girl demeans her status as a female and and trivialises her black sexuality as well.

The skit is quite sickening to watch. Sickening in the fact that while you watch it, you feel as if time is turning back and all the progression on the racial equality front is slowly been reversed. Minaj is, and always has been, a highly sexualised figure in the music industry. The difference between the Ellen skit and Minaj’s portrayal of herself is that Minaj exerts sexual agency and controls her image as opposed to being sexualised by others for the entertainment of others.

This parody turns that all on its head, reducing Minaj to the sum worth of only her arse. It zeroes in on one feature and objectifies Minaj, as well as legitimising the entertainment factor of the perceived ‘ridiculousness’ of black women’s bodies.

As a white woman, or a white person, it would be easy to dismiss the barrage of criticism being levelled at DeGeneres as merely an ‘overreaction’. But we have to remember that its easy to forget as a white woman, the way my marginalisation affects me is different to what a person of colour experiences. This is the argument which lies at the crux of intersectionality: I cannot know the kind of systemic oppression and sexism that someone like Minaj knows because the way society treats her is inherently different to what I experience. For her, race always inevitably colours her experience; for me it is an invisibility.

That’s why conversations that stem from controversies like the Ellen skit are important. They highlight the struggle women of colour face to be treated with dignity and not exploited as sexual playthings for the entertainment of others. Although neither Ellen nor Minaj have publicly commented on the episode yet, hopefully an apology from Ellen can mitigate some of the damage she’s caused to Minaj. Unfortunately for Minaj, she’s a already very adept at dealing with the racist and sexist bull crap of the mainstream media.