Billy, Billy, Billy. William Patrick Corgan, man, you’re an endless source of wonder and bemusement with your slightly left-of-field antics. Honestly, The Smashing Pumpkins frontman has a pretty long list of hobbies, which range from the slightly odd to utterly confusing.

Musical theatre wasn’t too much of a stretch in my mind, a lot of musicians dabble in it. Some even started out on theatre stages, while others carved new careers out on them.  His role as an executive producer for a pro-wrestling promotion company on the other hand, served one of those “what the fuck” moments Billy is so fond of.

Now, after what seems to have been extensive consideration, The Smashing Pumpkins front man has announced his retreat from his previously favoured social media platform, Twitter. He’s retired his @Billy account (it’s true, I searched for it, it’s gone) and in it’s place, he has set up a new website: People and Their Cars. 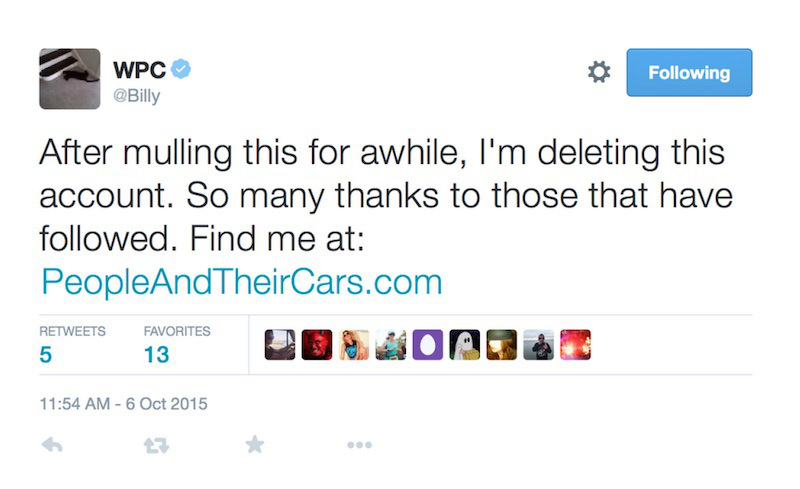 PATC is exactly what it sounds like, and then some. As the website describes, PWC hosts “Pictures (mostly Vernacular), design elements (found), and ephemera with smatterings of Art (conscious)… Vintage slide images are presented in an ‘as is’ condition, without correction or removal of their inherent imperfections.” If that alone isn’t enough, fans can sign up for the Red Boarder Club, which gives members access to more images, but provides them with a “first in line” place for new merchandise and the forthcoming books connected with the site.

If, for whatever reason, you’re interested in signing up, you’ll be glad to know that it’s all free.