Music students at New York University will be struggling to still their rhythmically beating hearts this week. Just days after an announcement that Pharrell Williams will be taking the post of artist-in-residence at the University’s Tisch School of the Arts, it has now been confirmed that the Beastie Boys will be allowing students access to their legendary New York studios, Oscilloscope. 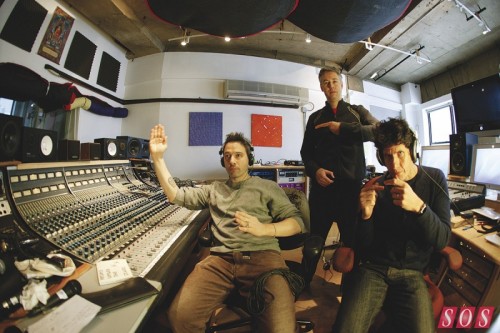 Announced this week via twitter, the deal will feed into part of the ‘Capstone Projects’ program at NYU’s Clive Davis Institute of Recorded Music. As part of their curriculum work, senior students will be able to use the studio’s facilities to record, produce and mix original material.

Referred to by the Beasties as the ‘Oscilloscope Laboratories’, the location of the studios is only known to be in the general New York City area. With visitors historically asked to sign confidentiality agreements on entering the portals of the mythical site, we can only imagine how many overexcited pairs of soiled student underwear will soon walk the same halls as artists like Jack White, Bad Brains and Santigold.

If the general miasma of genius that surely hangs over the studio isn’t quite enough to spark inspiration, students will also have access to the huge range of equipment in residence. With a beast of a mixing desk and run of vintage microphones, enough effects and plug ins to make Brian Eno blush, Oscilloscope definitely beats out your average university music tech!

And if you aren’t lucky enough to be part of the NYU student body, glimpses of the the studio feature in the Beastie Boys’ video for Ch-Check It Out. From their 2004 album To The 5 Boroughs which was recorded at Oscilloscope.