We’re already halfway through September. Not only does this mean that the springtime sun has finally come out, but it means that festival season is about to begin. Next month will see the second ever Soulfest taking place in Sydney and Melbourne – and today, the set times are here.

You’ve now got more than a whole month to figure out exactly who you want to see, when, where, and who you’re going to have to miss out on. This is really great news for people like yours truly, who will need this entire time to figure it out.

Soulfest will be headlined by the best and brightest in hip hop, R&B, neo-soul, jazz and more. It’s really exciting to see such a strong female lineup, from the legendary Lauryn Hill and Mary J Blige, to Jill Scott and Jhene Aiko, as well as upcoming local artist Thandi Phoenix and more, there’s such a big female presence, and I could not be happier about that. Top that with hip hop royalty De La Soul and Black Star (Mos Def & Talib Kweli), the sexy Miguel, jazz virtuoso Kamasi Washington and more, I can’t think of a single reason to not attend this festival.

Only a handful of sideshows have been announced, including for Aiko and Washington, and some additional shows in Brisbane, who are missing out on the festival – so get in quick.

Here’s the timetables for the Melbourne and Sydney events: 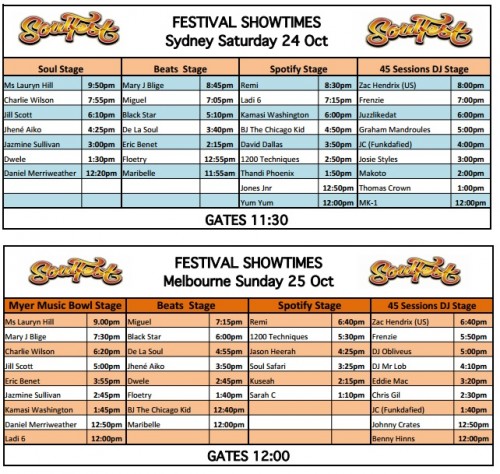