Arthur Ashin’s music is hard to put in a box. Under his Autre Ne Veut moniker, the New York native releases warped, histrionic interpretations of electro-pop R&B that can be at once devastating and life-affirming. His self-produced new album, The Age of Transparency refines the formula that garnered widespread critical acclaim on 2013’s Anxiety, mixing elements of jazz and choral music to send listeners through the full spectrum of emotion in 45 minutes. In August, we previewed the stunningly creepy video for lead single World War pt. 2 and today we were lucky enough to talk to the man himself.

Congratulations on the album! It’s streaming on NPR as of yesterday – how are you feeling about the early reaction?

The good part about early reactions is that they tend to be positive, you know, because people who want to like the record go and listen first so anything that comes to me on Twitter or Facebook is pretty positive. So that’s good!

It’s probably fair to say Anxiety was your breakout with the Pitchfork endorsement and all the ‘best of’ lists… Did the increased audience affect how you made the album this time around?

Probably to a degree. It’s hard to not think about one’s place in the world, for sure… but I did do my best to make the album I wanted to make. I probably shouldn’t have been given the access to a gospel choir and live jazz band and what not (laughs)… I should have just been forced to sit in my apartment and bang out another electronic record! But I’m really proud of it. I think going through the process of making, working and touring Anxiety made me realise how important it is to me to create work that feels super honest and articulates the ideas I want to get across.

You described making Anxiety as ‘cathartic’ for you – did The Age of Transparency represent the same kind of feeling?

Well (this time) was a more protracted process. Anxiety took about two months after the songs were written. I went in the studio for a month and a half and did the arrangements, mix and production stuff for about two weeks and that was that, like one winter. This record took over a year and a half to make so… also this time I worked more independently; there was nobody sitting around for the bulk of it. For about a year I was alone and so the catharsis was not quite as immediate.

I had to do a lot of really nitty-gritty work which is not exactly cathartic… maybe relaxing at a level on – a good day editing live drums perfectly… but it was hours and hours and hours.

You’ve said Anxiety tapped into your memories and life in the few years preceding that album – did you tap into your experiences in the same way on Transparency?

The themes (on Transparency) are a little more universal. The characters of ‘me’ and ‘you’ are less direct and I kind of played around with who the narrator and protagonist was. Throughout Transparency I’m singing from the perspective of like… I’m singing basically as a theoretical internet avatar that’s brainwashing ‘me’… who is the ‘you’. There’s more of that kind of stuff on this record; goofy literary terms… like Never Wanted is a kind of love story in Keynesian terms where Time and Love and Space are all capitalised and in my mind they’re these grandiose platonic figures… rather than being specific individuals.

I want to talk about your video for Panic Room which has you performing a cappella and failing to impress the judges. Could you imagine going on American Idol? Do you think Paula Abdul and Simon Cowell would like you?

Probably not – that was part of the idea. Early on when American Idol came out before my career I thought ‘maybe I should try the American Idol thing and get to Hollywood… that would be a good jump start to make the music thing happen’.

I think that was in the back of my mind and I stumbled across a video of a failed audition on Swedish Idol – I don’t know how it ended up on Youtube or whatever but… I don’t understand Swedish so I was guessing what the implications were… The woman goes in and starts singing her heart out and you know, she was pretty good! Not like maybe the greatest singer of all time but solid, you know? And she’s singing her heart out and at one point a judge interrupts her at this big moment in the song. (The Panic Room video) kind of paraphrases that… and in the process she and the judges look like they’re cheering up and kind of feeling it and I dunno… it was such an impactful video and I wanted to communicate how I felt. For me to tweet that video… people wouldn’t have paid attention but if I mix it into a music video people might get into it more.

On that note I’ve read you’re not all that keen on the act of performing in front of a bunch of people or even taking interviews – is that how the idea to perform the song a cappella in the video came about? This theme of transparency?

Definitely yeah. The bit that I’m not keen on… my background has more to do with spending time with music journalists. I have a massive amount of respect for what is asked of a music journalist. It’s more that I’m not super up on being the focus of attention. Which is funny because my entire project screams ‘look at me!’ It’s probably some subconscious desire to be stared at and appreciated in a very public way – otherwise I wouldn’t continue to do it.

But yeah it is a personal struggle. I just feel like it’s difficult as a musician to challenge yourself emotionally because the industry is designed to coddle you in these very particular ways – you know, your creative ideas or some dumb shit you’ve come up with is like shitting gold and any other idea around it pertaining to your career is stymied – in a way that’s the label interface with artists… where you’re kind of allowed to behave like a dumb genius or whatever so I think pushing myself to perform in that way is my avenue to grow personally… by pushing myself into situations I’m not comfortable with and can become a stronger better person without being coddled.

I saw you at Laneway in 2014 and I was surprised how aggressive you were as a performer… I didn’t expect you to be that out there. What do you try and evoke from your audience on stage?

I think it’s more selfish than that honestly. It’s like the great release for me. I think it’s an approach through which I tend to overcome my pretty serious stage fright! If I don’t kind of turn on ‘animal mode’ it’s hard for me to lose myself all the way… it’s like Nicki Minaj’s ‘growl mode’. My friends are like, ‘Nicki is a great rapper but she keeps doing that weird theatrical growl thing’. My feeling about that is that it’s easier for her to do that because it allows her to be one step removed from herself in a way. It’s also probably a cultural function in that my early shows were just me and my microphone performing in a Brooklyn basement. The way I think of live performance is… how do you as a vocalist match the intensity of someone cranking up their mixer super loud?

I want to ask about the new album’s tracklisting particularly the transition from the song Over Now – a very viscerally sad ballad – into Get Out, which literally starts with this incredibly uplifting gospel choir – what is the thinking behind that?

I think in a way Over Now is the last song on the record. And it feels like a downer. I try to create a ride for the listener – a ride they didn’t have as much control over as they might have wanted – so it felt like Get Out had to bring it all home – the way it’s super uplifting but it closes out with this almost funereal gospel vocalists. The record is an attempt to express the full range of human emotion in a 45-minute period. It’s also a good bookend to the first track On and On (Reprise) – like a more palpable version of that.

I’m sure you wouldn’t disagree a lot of your music definitely is pretty sultry and makes for good sex jams. How does it make you feel to think people are having a good time to your music somewhere right now?

Yeah it’s funny you know, I don’t ever think about that (laughs).

Yeah maybe I should sit around and think about it. That’s what I’ll do tonight. I don’t know if you saw Amelie? You know when she’s imagining how many people are orgasming at any single moment in time in Paris? That’ll be my closing image of this interview. People orgasming to my music. Like super narcissistic and dark (laughs). 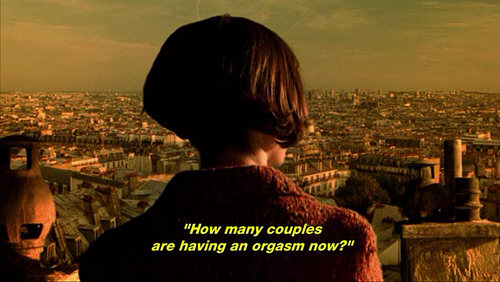 You came to our shores with Laneway Festival last year. Before you came you said you were told to expect some kind of ‘weird hipster circus’. What was your experience of Australia like?

Laneway was absolutely a hipster circus. I had the best time and I’m pretty road-shy so that’s a true compliment. It was run so well and I never felt harried or stressed about anything. It’s my perfect idea of how a touring cycle should run and if the Laneway organisers are listening I would love to come back.

You can get your physical mits on The Age of Transparency on October 2 through Downtown Records.