Being a transplanted resident of Far North Queensland myself as well as a poorly-closeted fan of the grimy riffs and filthy attitudes of Australia’s pub bands of yesteryear like Bon Scott-era AC/DC and Rose Tattoo, Melbourne-via-Cairns rock and roll miscreants Drunk Mums are one of my absolute favourite current acts.

Their output of new music since their self-titled debut LP was released in 2012 has been relatively sparse, with just a pair of lonely (but fantastic) singles between then and just a few weeks prior as this album was announced. The Drunkies have certainly still been making their way around the live circuit and ripping the roof off of pubs and bars everywhere that will have them, but my itch for new music from them was near feverish. Thankfully we’re about to get our fix with the release of their follow-up album Gone Troppo. 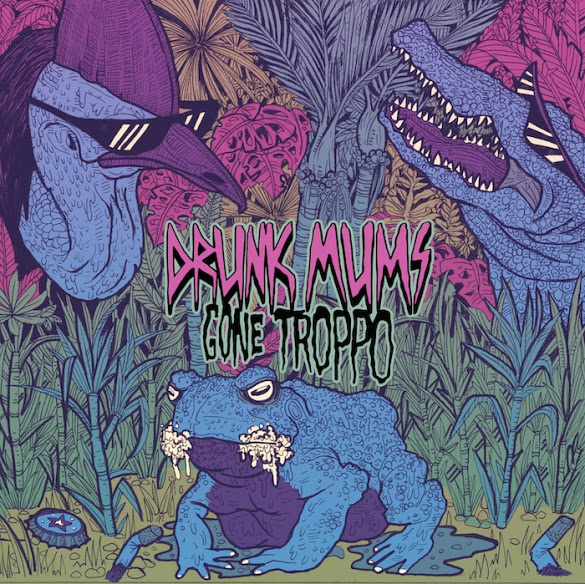 Right off the bat is Stinny’s Brain, a subtle throwback to Creedence Clearwater Revival’s distinct, storytelling brand of 1970s Louisiana bayou rock and roll, full of guitars as sharp as gators’ teeth. The lead single from the album, Pub On My Own, sticks around in the 70s but makes a lateral move from swamp rock to chugging, AC/DC-reminiscent power chord riffs. It’s a morose song that acknowledges the devil perched on your back, though dealing with it less down in the dumps and more sitting in solitude at a smoky local saying ‘fuck it’ as you pound back pint after pint of domestic beer, the guitar solo playing the song out once again from the Creedence playbook.

Gain initially sees a return to the relentless punk bass so characteristic of early Drunk Mums before jamming on the handbrake and fishtailing instead into a marching rock and roll number with a singalong chorus. The guitar solo that bridges the first chorus and second verse glints like a gold tooth in the sun, the wall of riffs and dare I say an almost funk-style bass playing the song out a nice change of pace and show of versatility all at once. The Drunk Mums boys may seem carefree in attitude but they are certainly no slouches musically. Girls On Their Sides is a low-down blues rock number, a slow-burning backbeat fronted by shimmering, reverb-heavy guitar chords and droning, hazily-filtered vocals. Up next is Plastic, released as a single way back last year. The riffs are all American classic rock in the vein of Spirit In The Sky and bands like Grand Funk Railroad and Boston, the chorus custom-built to be shouted in unison back at them by one of their raucous crowds.

It’s with Not Here To Talk that we finally get a hint of the old Drunk Mums. Clocking in at a tidy 1:59, it’s the all snarling, rapid-fire punk and roll that they’re so beloved for, though it takes away nothing from the first half of the album. Bad Condition with its warped out bass, honest three chords and call and response group vocals also harkens back to vintage Drunk Mums. Nanganator was the second single released last year and it’s a gleefully stupid sub two minute slab of raw and filthy rock and roll, I almost didn’t survive their live rendition of this at Brisbane’s Trainspotters and that felt like a personal failure.

Pretty Shitty is hangover rock, all belting, slow marching drums and screeching vocals tied together with some frenetic and headache-inducing guitar effects that I love nonetheless. At Ease is almost Misfits-esque horror punk in its delivery, again showing off the musical versatility of the band. Backyard Hit gets riff heavy once more, a hard rocking, inebriated ode to the simple pleasures of a weekend spent hiding wine from taxi drivers and rescuing your Sunday blues with a hair of the dog.

Black Sabbath bong-rattling bass opens what should be an instant Grammy nomination for Best Song Title in the foot-stomping Piss The Bed which, believe it or not, is less about nocturnal enuresis and more about accepting that you’re infatuated with somebody you shouldn’t be. It’s another slow-burner in Vitamin D that might be one of my favourite Drunk Mums songs ever. It’s a rejection of wintry Melbourne and a longing for a lazy day on the beach soaking in endless rays of the titular vitamin, the nostalgic shout outs to places from my youth spent in the Northern reaches of Queensland that were just silly with sunshine like Port Douglas, Palm Cove and Trinity Beach amongst others almost brought a tear to my eye.

Dirty Birmy wraps up the album, a day-in-the life narrated belter that reminisces on what would be some very real Drunk Mums antics from the inner sanctum of Fitzroy’s Birmingham Hotel. The clinking of glasses as the guitars fade out at the end is a nice cap off to an utter 14-track bender of an album.

All in all a fantastic and progressive follow-up to the debut Drunk Mums LP from 2012. Many initial listeners might critically write the boys off as a band of yobs who have made an album stylistically all over the shop. True as both of those statements may be, (though having met several of the Drunk Mums boys off the stage I can vouch that they are salt of the earth blokes) it’s of little consequence and only makes for a better and more authentic experience. It doesn’t have to be laser precise or ordered or full of depth thematically, it’s rock and fucking roll for shit’s sake and these boys do a fantastic job of it as one of Australia’s most criminally underrated bands.

Judging them by their cover would be an insult and a disservice to the many hours they’ve spent and miles they’ve traversed working at their craft and their sound. A sound that on Gone Troppo welds together the best elements of American classic rock, Australian pub rock and crusty, rammed down your throat punk rock to culminate in an album just made for sitting on your esky on the beach, soaking up the sunshine with a fishing rod in one hand and a cold beer in the other. An album that I’m sure is an auditory document of some of their fondest memories and a collection of songs they should be proud of.

If you still don’t like it, well, the Drunk Mums boys will probably just continue to do what they’ve done for their entire careers: reach deep into their big old sack of fucks to give and come up with only a tinnie of VB and their middle finger.

Gone Troppo is out now via Pissfart Records. Catch the boys live on their monstrous 15 date Australian tour at the following joints: