New York three-piece Battles transcend genres with their energetic brand of progressive math rock. On the edges of the Venn diagram they inhabit, contemporaries produce either high decibel walls of sound that are almost impenetrable, or meandering marathons of non sequiturs. In this field Battles stand alone, making music that is just as complex and intelligent, but offered up in bite-sized and melodic packages, accessible to a much wider audience. With latest release La Di Da Di, they bridge the gap between noise and harmony in what is arguably their best effort to date.

We recently caught up with drummer John Stanier on the eve of the much-anticipated release. Having played with Helmet, Tomahawk, The Mark of Cain and guest appearing on a slew of tracks, Stanier is one of the most talented and diverse drummers alive. When our Skype call connects, he is hanging out in Bed-Stuy, Brooklyn, where he spends his time between working with his various bands, or laying low in second-home Berlin. It is an early hour in Australia and I comment that I am starting the day off with breakfast and our chat.

“A little vegemite on toast?” He asks, amused, with a strong Baltimore accent.

I laugh and he continues, “Actually I’ve got to admit, it’s true that a teaspoon of vegemite in cold water – if you’re really hungover, kind of does work.” It is sage advice that even this seasoned drinker and vegemite fanatic is not aware of. I promise to give it a try.

With the sounds of FF Bada still rolling over in my head from a last minute listen to the new release, I ask what the globe-trotting percussionist has been up to since 2011’s Gloss Drop.

“I feel like I have been travelling non-stop for like two or three years… That’s not to say I am the sole reason it took this long, but yeah…” he says, “We would get together write a little bit. Everyone would go away, do there own things, then we would get back together, write a little bit more and see what happens. It was just this back and forth process for quite a while.”

“Did you work on it while you were in Berlin?” I ask.

“Me personally, I can kind of only work if I am in New York. I have lots of ideas and opinions and arrangements and stuff like that, but the actual physical drum-playing only happens when I am in New York and with the other guys… Some other records were started with something like a drum beat, but this record was more loops first and everything else second.”

And loops make up such a big component of the Battles sound. They have always been prevalent, but on La Di Da Di they are front and centre. I comment that while watching the mind blowing clip for the single Yabba, I couldn’t help notice that the circular imagery pays homage to the loop, which on this record almost functions as a fourth band member.

“I am really really happy that you picked that up,” John replies with a smile in his voice, “I feel like definitely in Battles there is always this backbone, mother loop, always. Half the reason…or really the only reason… that the drums are up in the front live is because I am playing in front of this huge amp, blasting this main loop behind me so that everyone can hear it. So in a way, this master loop, it is the fourth member, it’s kind of a machine. That’s really the drummer. I am just listening to that, and everyone is listening to that, more than they are listening to me, and everything is played off of this master loop. That’s totally the deal. There is this secret sort of entity; there is always this strange energy, loop entity that exists in Battles that really is almost the driving force behind our sound.”

For those who haven’t been treated to the Battles live show – they’ll be performing at Laneway 2016, so now’s your chance – the stage set up is a little unconventional. Stanier is perched out front like a conductor, waving his wands with dizzying speed, crescendoing with a skyscraping crash of the cymbal. For a guy that has spent most of his career in heavy rock bands, I ask how important maintaining those live and organic elements are – considering the plethora of technology employed across Battles production. 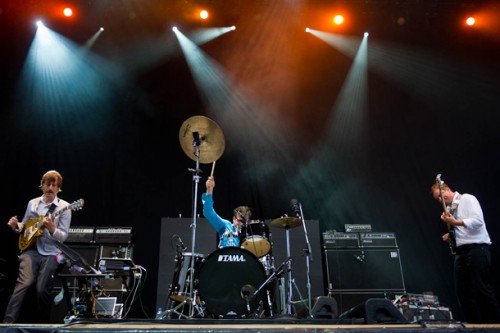 “When the band first started out, we really really wanted to maintain the integrity of not sequencing anything and not cheating at all,” he says, “So playing live, everything was created live on stage in the middle of the song. We prided ourselves on being able to pull that off. Everything was live… So I think that the original manifesto of Battles was recreating everything live, and that spirit still exists, I’m not saying it is 100% like that but it’s pretty close. It’s very important.”

If you want to see just how many ingredients go into making these maddening cocktails, the band recently released a short documentary tracing the recording process. The Art of Repetition follows them over the three weeks at studio Machines With Magnets and delves into the strong and zen-like relationship the trio have built. To hear them talk about it, there is an astute understanding that conflict is a healthy part of any project, and they embrace it with open arms.

“There were a bunch of blow-ups at 3 o’clock in the morning,” John says matter of factly, “But I wouldn’t change that. That’s what makes these records.”

In the film, Seth, a producer at the studio, describes John as the guy who makes things happen. When I ask if he is the motivator of the group he is quick to shake off any claims to leadership.

“No, no, no, no. Maybe. Maybe not…” he ponders, “The band only works because of the ying and the yang, and the pushing and pulling of radically different people. Someone has to be that person you know; we just have a hard time of knowing when to stop writing. I feel like if we didn’t stop to say let’s book the time now, to make decisions, to know when the song is done, to know when to stop painting the picture, we would still be writing the record now. It’s a matter of narrowing down your options and making a commitment really… There is an art of knowing when to stop, and I think we have mastered that art now.”

La Di Da Di does sound like an output from a group that is more in-tune and organised than ever before. The flow between each track is flawless, taking listeners down a path with surprises at every turn, but has enough familiarity throughout to maintain a common thread to cling to. As a listener you might feel dizzy, but never lost. This likely comes from the mountains of pre-preparation done, narrowing the recording time down to three weeks as a opposed to massive previous stretches of up to seven months.

With the Laneway announcement just around the corner, I check in to see what John is most excited about for his upcoming visit.

“I’m really excited that we’re playing a festival” he pauses to consider his words, “It seems like a more tastefully curated festival… I feel like the last three times I have been down there it’s been one of the big festivals, I won’t say names… and it’s been (pauses again and hesitates), but yeah I’m pretty excited.”

Taking liberty to read between the lines, he is pumped to be part of the renowned boutique event, one which has undoubtedly earned it’s place as the biggest taste-making experience on the Australian musical calendar. We’re pretty excited to see Stanier and co wreak his insane brand of havoc next February.

If my predictions are correct, it will be an intense set that will induce a musical hangover so strong that not even a good dose of vegemite water will cure.

Get your clicking fingers ready to buy advanced tickets to Laneway on September 25th, and general public tickets on September 30 here, and check out La Di Da Di here.