OutsideIn Festival is right around the corner. Taking place in Sydney next weekend, the festival, now in its fourth year running, is easily our favourite local event of the year. The lineup boasts an impressive selection of hip hop and electronic artists, mostly underground, all brilliant.

Unfortunately the news came out this week that R&B artist Bilal has had to cancel his headlining appearance at the last minute. According to the official announcement, made over Facebook, Bilal’s “management have decided to postpone his Australian tour at this stage. We apologise to his fans who, like us, were looking forward to seeing him play. We hope he can make it to our shores in the near future!”

The cancellation really sucks, but we’re still going to be able to enjoy Big K.R.I.T, Devin the Dude, Stormzy and more, alongside Total Giovanni, Charles Murdoch, Sable – among many others.

The news comes along with Bilal’s replacement, bass-lovin’ duo Africa Hitech. Made up of Mark Pritchard and Steve Spacek, they played at the very first OutsideIn in Marrickville in 2012, while Pritchard performed at the event in 2013.

In other OutsideIn news, it’s been announced that the day will begin with sounds from THUMP competition winner, Melbourne’s Anatole. The festival have also now released an exclusive OutsideIn mixtape, to get you even more excited!

Early bird tickets have sold out, but you can still purchase the last few general admission tix for $91.80 right here.

Here’s the full timetable. See you there. 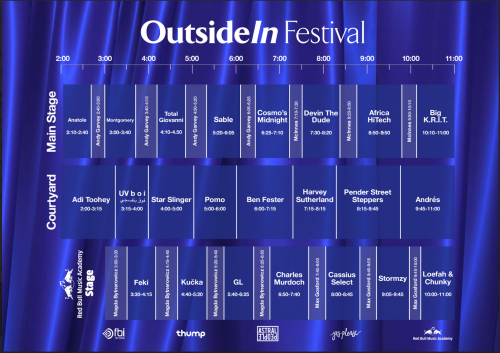