Funky Aussie designers DI$COUNT UNIVER$E have taken aim at Miley Cyrus for ripping off their signature style after she paraded around the MTV VMAs in strikingly similar garments.

In typical Miley style, she finished off the always-eventful MTV VMAs in a blur of colour featuring an ensemble of drag queens decked out in outrageously fun costumes as she performed her new single Dooo it!. The only problem was, the costumes featured sequined eye and mouth motifs – something DI$COUNT UNIVER$E has built their brand from. Take a look and see what you think of the comparison:

And this is what Miley wore: 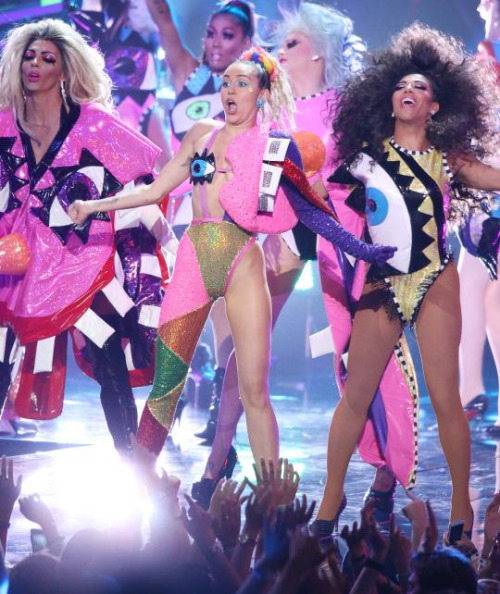 DI$COUNT UNIVER$E is not some underground brand with a few hundred cult followers – it’s a popular brand loved by none other than Miley herself, which makes the whole issue very confusing. She’s even been a patron of them before, incorporating their sequined facial prints and imagery into her Bangerz tour. The brand has even scored Katy Perry and Rihanna to wear their garments.

Miley’s costumes were designed by BCalla, but it’s hard to deny they are at least heavily influenced by DI$COUNT UNIVER$E DNA.

DI$COUNT UNIVER$E was understandably upset, posting on Instagram after the incident:

Simone Harrouche who is one half of the design team from BCalla was quick to respond – and didn’t hold back.

“It’s very sad that people need to use Miley’s amazing performance as an opportunity to create press for themselves, when they had nothing to do with the creative process. It’s unfortunate that they’re taking away from this young designer’s opportunity to make something special for Miley.”

The fashion industry is built from taking inspiration from other labels – how else could trends catch fire? Issues of copyright may arise in this case, and who knows whether DI$COUNT UNIVER$E can be bothered to descent into the murky territory of the courts. Whether or not it is found to be copied illegally copied or merely just inspired by DI$COUNT UNIVER$E, the issue I find hardest to swallow is that Miley’s team knew of DI$COUNT UNIVER$E and had actively flaunted the brand in the past. Now, to go behind their back and incorporate such a similar image without even so much as admitting it or crediting them – that’s low.

But if what DI$COUNT UNIVER$E wanted was publicity, they’ve got it.