Justin Bieber is, finally, doing all the right things. We never thought we’d see this day come, but it has. Howl & Echoes is a collective Belieber. What Do You Mean is one hell of a tropical electro-pop single and we aren’t ashamed to admit we’ve been jamming to it a lot. Top that off with the obvious changes Bieber has made in his life – generally called growing up, but when you’re a celebrity it’s a little different – the fact that he’s not exactly hard to look at, and emotional honesty seen both at the VMAs and on Jimmy Fallon….. well, let’s just say that his publicist is a fucking genius.

Five years ago a fresh faced Bieber appeared on The Tonight Show and competed against Questlove in a drum off. Remember this guy? Before the tattoos, the drink driving and the ego to rival Kanye West, there was a kid who was kind of endearing. Seriously, look at that baby face. 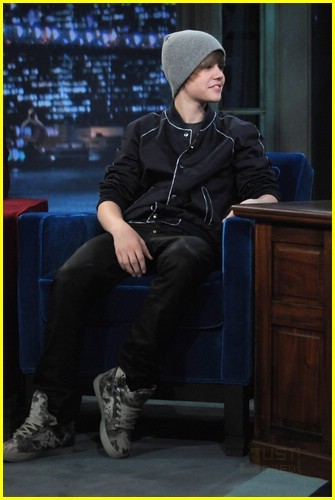 But, like all kids, the Biebs has grown up right before our eyes. Now sporting an outfit that can only be described as apocalypse-chic, he returned to the Fallon stage for a rematch. As he sat behind the kit It was immediately clear that he had been working on his jams; he held his own against The Roots rhythm man, with an impressive back and forth. Eventually, after an extended solo, Questlove unconvincingly conceded with a shrug and exited from the stage, leaving an ecstatic Bieber jumping up and down, planting a kiss on Fallon’s cheek.

The singer also performed his single What Do You Mean? and spoke about his emotionally charged VMA performance, before revealing to a very excitable audience that his yet to be titled album will be out November 13th.

We were pleasantly surprised by the new track, to say the least, and look forward to seeing what else the comeback of Justin Bieber holds.

Bieber also gave an open, surprisingly heartfelt interview, where he discusses his past troubles, his emotional VMAs performance, and the fact that he’s been growing up like any normal teenager – there’s just a lot more cameras in front of his face.