As someone who is an enormous fan of Kanye West but who holds the whole idea of ‘high fashion’ in complete and utter disdain for being so shamelessly ridiculous sometimes, comments from Peruvian-via-Harlem rapper Immortal Technique today had me chuckling and nodding my head in approval.

After premiering his Adidas line at New York Fashion Week today to what I can only imagine was some pretty sycophantic applause from the crowd (including wife Kim Kardashian, rappers Tyga and Common as well as the editor-in-chief of Vogue, Anna Wintour) Kanye might have been feeling like his latest foray into fashion was a great success, but Immortal Technique was having none of these artsy-fartsy clownshit clothes, taking to Instagram immediately to voice his thoughts. 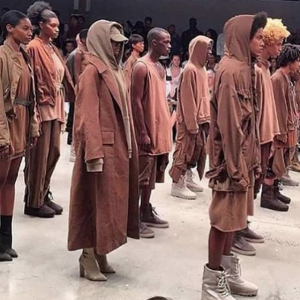 After posting the above image with the caption ‘After the Death Star II was destroyed over Endor, Luke Skywalker and Kanye West opened up a new Jedi Academy’. Not content to end his verbal barbs there, Tech went on. ‘No I’m not a fashion designer. But then again, I don’t spend millions of dollars to look like an idiot’.

Kanye is going to have gravel rash after getting dragged like that. Concluding the post by getting a little bit political, Tech stated ‘If that was the case, I would be running for president as a Republican. lol.’ adding in hashtags including #TheForceAwakens and #whowearsthisshit?

I’m inclined to agree with Immortal Technique here, Kanye has these models dressed like a bunch of Tusken Raiders trying to organise a game of pick up basketball. I’m a fan of Kanye the rapper, Kanye the producer, Kanye the future president and Kanye in just about any capacity you can think of, but when it comes to fashion design he is coming up unintentionally hilariously well short of the mark.

Check out our Flashback Friday on something good Kanye has done or read more about his unintentional hilarity right here and also here.