When a guy called Micky Williams created a tongue-in-cheek meme of rapper Ice Cube being an ISIS soldier dressed as a Syrian refugee, it was shared over 20,000 times in a matter of hours. The meme was posted on his Williams’ Facebook page and according to the creator, “a good 10 percent” of those who shared the photo thought it was real. Perhaps not so obvious a joke – what was intended as offhand and playful ended up enraging a number of activists, and the image has since been pulled from Facebook. 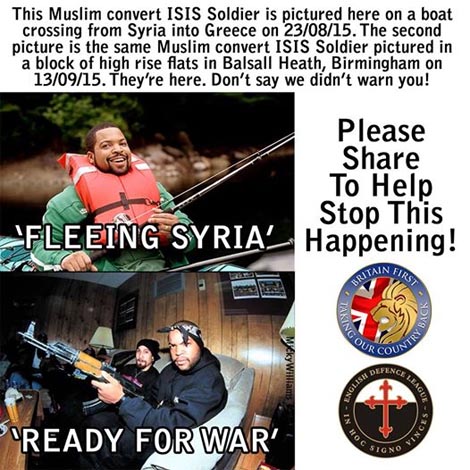 But perhaps Williams’ satire hits a little close to home – anyone familiar with the rap group Westside Connection and their album titled Terrorist Threats might be forgiven for doing a double-take at the meme, which also features a picture of rapper-turned-actor Ice Cube taken from the family movie Are We There Yet.

The group’s 2003 album uses all post 9/11 buzz words, from Osama bin Laden to the Taliban and Saddam. In Westside Connection, the rappers used the names The Gangsta (Ice Cube), The Killa (WC) and The Dope Dealer (Mack 10) and called themselves old-school terrorists who posed ‘a bigger threat than Al-Qaeda, Hamas, and Hezbollah combined’. During the tracks Terrorist Threats and Lights Out, the trio refer to themselves as “the young Osama with that al-Qaeda drama”, as well as, “Saddam, bin Laden and O.J. in a Chevy”. Considering that these are still considerable political issues, it’s a lot to have forgotten about such well-known public figures, even if their group, Westside Connection, has been broken up a while.

The west coast hip hop super group of Ice Cube, WC (Dub C) and Mack 10 first appeared together on Mack 10’s self-titled debut in the song Westside Slaughter in 1994. They came together as an official group in 1996, and from then on, the trio were a non-stop assault of threats, disses, macho braggadocio posturing, and disturbing narratives of west coast life. They were the personification of ’90 era west coast gangsta rap; the gangsta rap group that defined my generation.

Their first album Bow Down was a relentless, chest-beating, dick-measuring, tough guy album posing gangsta rap in its most authentic form. It is arguably the greatest hip hop record to come from the west coast during the decade, and some of the greatest work Ice Cube has ever put forth. Through the album, Cube, WC, and Mack 10 never take a second off from informing us of their alpha dog status through astonishing flows, with scolding verses and catchy hooks.

It has been 10 years since Westside Connection disbanded, after Mack 10 left the group due to a conflict with Ice Cube in 2005. Ice Cube has said that while the group could get back together and anything was possible, for him to even consider it, Mack 10 would have to “kiss the ring first.” So, basically, the group is over – forever – since the pair haven’t spoken or worked together in years. The last we heard about the group was 2011 in an interview with Vibe Magazine, when Mack 10 said: “I don’t know if we will ever speak again. I haven’t given it much thought. It’s all about Hoo Bangin’ [Mack 10’s record label] now. Outside of that, I can’t really think about it. That’s the way you have to approach this business right now. This is not 1995 anymore.”

And don’t we know it. I can’t be the only one pining for ‘90s era gangsta rap, and I am not just some hipster pretending I loved gangsta rap before the NWA movie came out this year: I actually did love it. I was a Westside Connection bangin’, Geto Boys blastin’, Mobb Deep poundin’, Wu-Tang lovin’, Bone Thugz rappin’ type of kid with a Snoop Dogg hair style who was called all of the ‘W’ words (‘wigger’ and ‘wannabe’ mainly) for these choices. Nobody in my year level knew or cared about gangsta rap, except me and my homie D-Dubbs, and not one of my peers or English teachers ever noticed or called me out for the NWA lyrics I recited in my creative essays.

But enough about my poor English grades – why don’t we revisit a classic. Get yourself a drink, turn up the volume, and bow down.