It would’ve only been seconds after it happened, that the whole world knew everything there was to know about Kanye West’s Yeezy Season 2 runway show at New York Fashion Week last night. Though only a few hundred managed to attend it in person, I was one of many people around the world who sat in a cinema and watched the stream live. It was a pretty fried experience to say the least.

My mate had sent me a message the day before telling me to sign up to something via email. I trust him, so I did it straight up without really knowing what it was. He told me it was for tickets to Kanye’s stream, which had in the past meant free merch to people that went, and of course new track premieres. Sounded pretty sick – and though I was really quite sick myself, I thought sitting in a comfy cinema seat with Kanye for an evening sounded like a pretty good way to make me feel better.

The email says 1:45am sharp, so we rock up a little bit beforehand with our plus ones, expecting a huge line. Not really, we managed to make it to the front, super hopeful for some Kanye gear – but, to our mega disappointment, there isn’t any. Unsurprising, we’re all the way down under – I can’t imagine Kanye or anyone shelling out a few hundred (potentially thousand) bucks just for some people that rocked up to stream his show at the movies in a city he’s hardly spent any time in. Either way, people are burning. Once the manager tells us that there aren’t any freebies, he says that everyone’s been asking that for ages. I quickly realise that the crowd coming to watch was obviously more Kanye-clothing focused than Kanye-music focused as well. I can’t tell you how many pair of Yeezy Boosts (both his latest and the boots) I would’ve seen – and those that weren’t wearing Kanye were wearing real intense shoes – triple white and triple black Nike and Adidas as far as the eye could see – it contrasted pretty well with our choice of track pants and sneakers.

We waited around for a little bit. The Candy Bar was open so right before we go in we buy some choc tops and popcorn – definitely need something to snack on for whatever it is we’re about to see. At 2 on the dot we get ushered into the cinema – the Extreme Screen, where all the crazy action and 3D films get shown. You definitely would’ve been there on a Boxing Day – Avatar, 2009, you know what I’m saying.

For ages all we can see is a static screen with ‘YEEZY SEASON 2’ printed on it in VHS, home recording style font. Almost everyone in the room jumps down to the entrance level of the theatre to get tonnes of photos, no doubt Instagramming the experience and increasing talk around Kanye’s clothes – probably exactly what he’d hoped would happen with the stream. We sit for what feels like ages, and after about twenty we start seeing stream footage of the whole venue. The Control Room, Interior Stairwell, Front Of House, all the rooms have names and all we can see is a stationary angle with people funneling in and out. We get told by a Microsoft Mary type voice that we’re one of 32 countries streaming the experience – including a cinema in Melbourne, the only other Australian city doing it.

It actually proves to be more fun than it sounds. My mates and I make a game of seeing who we can recognise, and catch glimpses of people like Tyga, Drake, Lorde, Seth Myers, Vince Staples, Jay Z and of course some of the Kardashians. At one stage the stream froze for like twenty minutes, and people started to freak it in the theatre. Audio’s still running, so we can hear that the show hasn’t actually started yet, so I’m not worried. Tonnes of people start leaving the theatre obviously trying to get the ushers and the projectionist onto it, and eventually it gets fixed and we time out perfectly with the show beginning, with camera angles switching just to the floor of the venue. 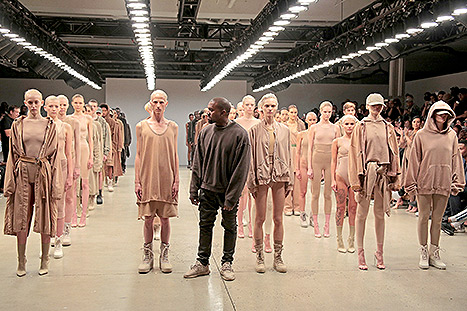 It’s similar to Kanye’s first season in that everything has a really military aesthetic to it. It’s been criticised today for looking a hell of a lot like something you might wear on Tatooine from Star Wars, and though I can see that, I really liked some of the pieces that were coming out. There was a model smoking a cigarette in the middle of the show as well, which everyone in the theatre had a hearty chuckle at – I didn’t really see what the deal was – and some pieces got some muttered discussion from almost everyone. Then, finally, as all the models re-entered the stage, a song started playing. Like his last show where Wolves, feat. Vic Mensa and Sia, started playing over the top of the models just standing there, this was the same situation. Fade, with Ty Dolla $ign and Post Malone samples classic house tracks Deep Inside and Mystery of Love, and is straight up a sexy auto-tuned banger. It was weird sitting in a cinema of people just watching these people standing in formation and listening to a new Kanye track, it’s a feeling that’s really hard to describe. So many people had their phones out, and when a mate suggested I get a video to upload for the article, I knew there’d be so many videos up today, I wouldn’t have to bother. Kanye finally came out as the track started to peak, really teasing us – I was hoping for some crazy verse that never came – before heading backstage with all the models. Lights up, show’s over.

It was a strange moment in the cinema after the stream ended, where everyone just simultaneously wondered if there was anything else to it. It was 3am by this time, I hadn’t expected to be up this late for what ultimately was about fifteen minutes worth of video. Once the crowd in the stream started to leave and mingle (so many people swarmed Seth Myers and Kim K separately, was a real awkward site to see), everyone in the cinema thought to do the same.

I’m really glad I went to the Kanye stream. I’ll admit I’m not a hugely fashion conscious dude. I went for Kanye because he’s Kanye and I thought it’d be interesting, not just for his clothes. I came away with these new understanding of how people see him in the fashion world, and also how he sees himself. It was a really fried and good experience, I definitely recommend it for anyone who has even a shred of interest in what Kanye’s doing. Also it got me mega geed up for his new album Swish, which should be dropping later this year – my god.