Nestled in the quaint and lush countryside of the English north-west is the town of Macclesfield. The winding paths of the town’s expansive cemetery are lined with modest gravestones, each commemorating  the life of one of Macclesfield’s late citizens. One of these gravestones – no more or less remarkable than those around it – is marked ‘Love Will Tear Us Apart’. Its unembellished surface and basic typeface belie the extraordinary story of the man it honours.

In May 1977, an unknown band called Warsaw took the stage for the very first time. Comprised of vocalist Ian Curtis, guitarist Bernard Sumner, bassist Peter Hook and drummer Tony Tabac, the band, formed in Salford the year previous, received rapid and favourable exposure as a result of reviews in the NME and other national publications. By 1978, Stephen Morris had become the band’s permanent drummer and their name had changed to Joy Division, which is a reference to the infamous prostitution wing of the most depraved Nazi concentration camps. It was on that sinister note that Joy Division began recording music – first their An Ideal for Living EP in December of ’78, and then their timeless debut album, Unknown Pleasures, in June 1979. 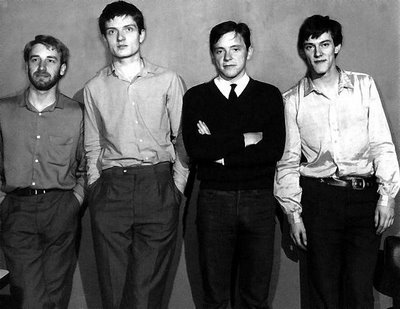 Like many my age, my first encounter with Joy Division was The Wombats‘ 2007 single, Let’s Dance to Joy Division; several years later, and with a broader knowledge of the band in question, the irony of this reference finally dawned on me. Nevertheless, to say that dancing to the gloom of Joy Division is an oxymoron would be untrue, because Curtis himself managed a unique kind of dance floor arrhythmia as he sang. This iconic dancing was said to be a reflection of his worsening bouts of epilepsy, the sudden onset of which marred many of the group’s live performances.

Disorder, then, is an apt beginning. Peter Hook’s bass provides a melodic anchor around which the other instruments float and intersect, their unerring groove pierced by Joy Division’s most striking guitar riff. There is an eerie sheen to Unknown Pleasures that is at odds with the intense moods and experiences  the band sought to express. The raw aggression and emotion of their live performances gave way to a sound that was altogether more spacious (with the exception of the short, frenetic Interzone). Recorded, Disorder is almost a pop song. But listen to it and imagine Ian Curtis writhing madly on a dimly-lit stage, Stephen Morris’ drums a cacophony in the confinements of a Manchester club, and I think you get a far better idea of the essence of Joy Division.

Day of the Lords is gloomier, Hook’s bass less buoyant. Bernard Sumner’s guitar wails above Curtis’ wretched howls of ‘When will it end?’. Motoric percussion leads Candidate down the same dark alley, before a clanging gate introduces Insight, the vocals for which were deliberately recorded down a telephone line. The man responsible for this idea, and the eclectic array of sounds that appear throughout Unknown Pleasures (a bottle being smashed in I Remember Nothing, for example), was producer Martin Hannett. His unconventional methods left the band members divided in their appraisal of the album. Curtis and Morris were pleased, while Sumner and Hook thought it conveyed too dour an atmosphere and all but stifled the elements of punk that surfaced in their live performances.

This temperance is perhaps most apparent in New Dawn Fades; it teeters on the edge of ferocity, but, like a dog with a barking collar, is restrained to merely a snarl. This is a stark contrast to the clean, metronomic percussion of She’s Lost Control, one of the most memorable cuts from the album. The lyrics tell of a girl suffering an epileptic seizure; solemn enough in itself, this topic is made all the more poignant by Curtis’ own immense struggles with epilepsy.

Music is inextricably linked with emotion. As I get older and experience an array of more complex emotions, I often turn to music for validation and solace. It’s not that Joy Division’s music is the saddest or most relatable; it’s that it resonates in a way that is completely unique. Their remarkable aptitude for balancing sorrow and vigour, conveyed with the authority of Ian Curtis’ haunting baritone, ensured that the band’s existence, while brief, was enormously influential. This brevity was due, tragically, to Curtis’ suicide on the 18th May, 1980. He was 23.

In the end, no-one knows exactly what tore Ian Curtis apart. It might, indeed, have been love, or the failure thereof – his marriage had all but disintegrated – but the true reason he hanged himself in his kitchen is still veiled by conjecture. Fears about the band’s upcoming North American tour, as well as ongoing mental health problems, are probable contributing factors.

As a whole, Unknown Pleasures is an enigma of an album. It’s sparse, yet tremendous, offering as much ambience as it does passion. The circumstances surrounding Ian Curtis’ death undeniably enhance the mystique of Joy Division’s debut; nevertheless, it remains as relevant today as it was 36 years ago, having inspired a myriad post-punk bands at a definite turning point in music history.