The sun rose today. We all need to pay our taxes. And serial fuckstick Chris Brown once again decided he’d care to pick up his smartphone, flex his miserable fingers and fire off yet another sub-140 character post outlining exactly how much of a piece of shit he is (SPOILER: it’s very much). Look at this. LOOK AT IT.

Chris, you are out your mind.

This is not about whether singling Chris Brown out to be denied entry into the country based on a previous history of domestic violence is a good idea (we’ve already let our feelings be well known on that issue here and also here) or a consistent one based on our history of letting artists with similar records in without issue. What denying Chris Brown an Australian visa would represent, is one of the first steps in the right direction towards addressing the absolute scourge of domestic violence in this country, and if it sets a precedent for other artists with very real, violent criminal pasts to be also denied entry who aren’t regarded with the same kind of public disdain as Chris Brown then so be it.

The issue here is that this absolute dropkick of a human, a man who is best known for committing an utterly heinous act of domestic violence, then proceeded to not only be completely remorseless about it to the point of getting a tattoo that all but commemorates it, thinks it’d be a grand old warm and fuzzy idea to come to our shores and lend his insider expertise on the issue to raise awareness about domestic violence.

You’ve got to be kidding me.

Just take a second to think about how disgracefully inappropriate that is. Picture Chris Brown giving a talk to schoolchildren or young men, appearing on TV talking about it in full view of the entire country and its many, many survivors of domestic violence. Chris Brown, the living, breathing, piece of shit avatar of domestic violence in the 21st century getting up and pretending as though he could give a damn about any of them when he’s made it clear that he doesn’t for years. Picture this tattoo he got on his idiot neck looking back at those same women the whole time and try not to vomit in your mouth at the thought of how repulsive to the point of emotional trauma that would be for them. 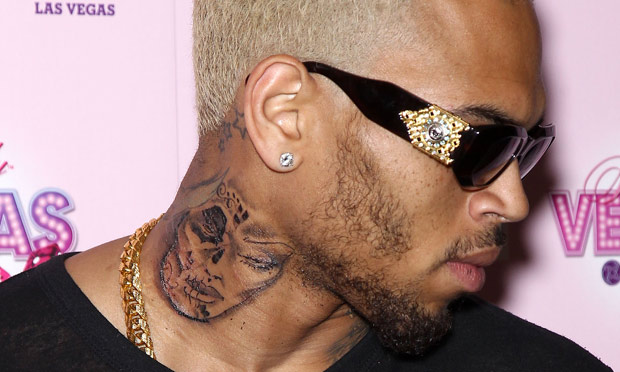 Try and imagine any of the young men out there he’d be trying to educate taking him seriously in any way when he managed to escape, like some kind of poor-taste Houdini, the abrupt end of his career and the lengthy jail time that should befall any of us were we to beat a woman so badly that she required hospitalisation. This man serves as no kind of ‘warning’ to anybody, just a bleak reminder that domestic violence is still regarded with such a laughably flippant attitude to the point that celebrities are above the laws and consequences of it.

He then tried to justify his comments with a couple of follow up Tweets:

Crimes* Chris, it’s pronounced ‘crimes’. Mistakes implies that being the horrible, violent waste of space that you’ve repeatedly proved yourself to be, is somehow erasable. And as for your secret entertainer powers? All you’ve used them for is to figuratively dance in the faces of the sufferers and on the graves of all the victims of domestic violence by using the wealth you’ve inexplicably managed to accumulate as a talentless entertainer to help you dodge the consequences for your crimes. There are plenty of other, far less offensive and more effective ways to educate ‘the youth’ about domestic violence that don’t involve you in any capacity.

No, this gross little suggestion of his is pulled straight out of the book of inexcusable fuckwittery with a foreword by George Zimmerman. Ignorant and tasteless on so many levels. It would be one (still incredibly horrible) thing were this sentient fart in a jar to have come out with this kind of ‘let’s raise awareness’ attitude straight after he did what he did to Rihanna, but to act like an utterly remorseless jackoff about it for years afterwards, only to then turn around and say you’d be grateful for the chance to raise awareness about the issue here when you’re facing a visa denial (and the subsequent loss of a whole lot of money from the pockets of your horrendously misguided fans), is so vomit-inducingly, horrifyingly transparent and just arrogant.

It’s arrogant as fuck from a man with a history of being exactly that.

Not only that, he even ended that first Tweet by turning it around on his critics as though they’d done something wrong, made him ‘the pink elephant in the room’ (as though that sentence isn’t complete and utter nonsense).

There’s helping to rehabilitate criminals and then there’s shoving them and their crimes in the faces of the last people who need to be reminded of them. Chris Brown lost the chance for even a single iota of the credibility of his character to be retrieved or for any shred of good to come out of his crime when he got that tattoo – even though he somehow tried to dismiss it as inspired by a Day of the Dead skull. Or when he proceeded to react to questions about the domestic violence incident by getting violent. Or when he decided that his violence didn’t discriminate between gender or sexuality and he got homophobically violent. On more than one occasion. Or when he treated his rehab like a joke and got kicked out allegedly for, you guessed it, getting violent.

How much more evidence do we need that Chris Brown doesn’t give a tuppenny fuck about his past as long as he can keep making money into the future? How much more evidence do we need to suggest that simply letting him (or anyone else with a similar record) into the country sends an abhorrently awful message, let alone that allowing him the opportunity to raise awareness about an issue he is both criminally undereducated and wildly insensitive about, is a FUCKING TERRIBLE IDEA?!?!?!