Rappers have always had run-ins with the law. Some have been put behind bars, some have been banned from entering countries and some, like Chief Keef, have been deemed an “unacceptable role model,” in a statement issued by a spokesperson for Chicago Mayor Rahm Emanuel. The comment is in reference to the Chicago rapper facing an arrest warrant in Illinois for allegations that he failed to pay child support. Keef has been unable to return to his hometown of Chicago for a full year for fear of being arrested.

It is a surprising statement, as since the warrant was issued Keef has done nothing but make music and try to put on a series of concerts by hologram. The concerts were meant to be benefits to raise funds for the families of Marvin Carr, a fellow Chicago rapper and friend of Keef’s who was gunned down in July, and Dillan Harris, a 13-month-old child who was killed by a car fleeing the scene of that shooting. Being unable to perform in Chicago (in person or by hologram), Keef moved the concert to Indiana. The performance was billed as ‘Stop the Violence’. 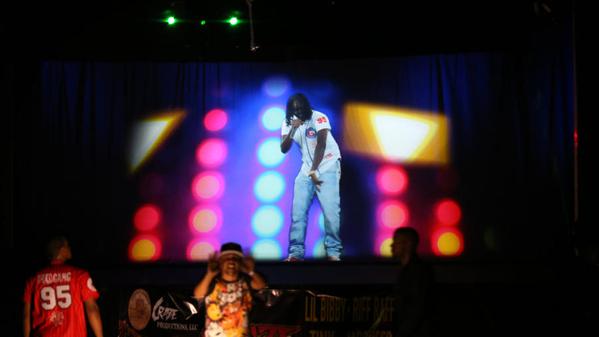 But it seems that even in Indiana, Keef’s presence still “posed a significant public safety risk,” as the concert was shut down after the opening song. Police stormed the stage and tackled the hologram version of Keef, only to find themselves face down on the floor in embarrassment when they passed straight through the body of light.

Well, that’s not exactly how it happened. It’s just kind of hard to imagine police shutting down a hologram if they didn’t mistake it for the actual Chief Keef. Can ‘allegedly’ not paying child support really instil such fear in officials that even his likeness is guilty? But somehow, Chris Brown’s constant and public disrespect and violence towards women is ignored? It makes no sense – and now, suddenly, several other venues have cancelled the hologram shows.

Personally, Chief Keef strikes me as a stand-up dude (lack of child-support payments aside) – the concerts were, after all, to raise money for the families of two people killed in a shooting. Keef will not be deterred from the aims of ‘Stop the Violence’, putting on his futuristic concert last Friday night at Henry Fonda Theatre in Los Angeles. For a holographic show, there were some very real speed bumps, and the show had to pull out of its original venue at the last minute after a producer reportedly “was hurt” during a walk-through.

The Theatre’s parent company AEG cancelled the show, forcing Keef’s reps to move the benefit concert to a new venue (a parking lot next to the Fonda theatre). Keef’s reps have also filed a police report of their own regarding the situation, and called the venue’s actions a “cover-up [of] brutal assault by its security forces.” An AEG rep disputed these allegations, saying that the cancellation was due solely to “concerns for the safety of our employees and the public”.

Not all attendees made it to the new venue, which might have been a big deal but ultimately didn’t matter because the Keef hologram was again shut off after only one song. An organizer told everyone in the audience to meet up at a nearby club, and security guards started forcing people to leave. Billboard tracked down a police officer and asked him what happened, and he explained that Keef didn’t have the proper permits for this holographic performance. 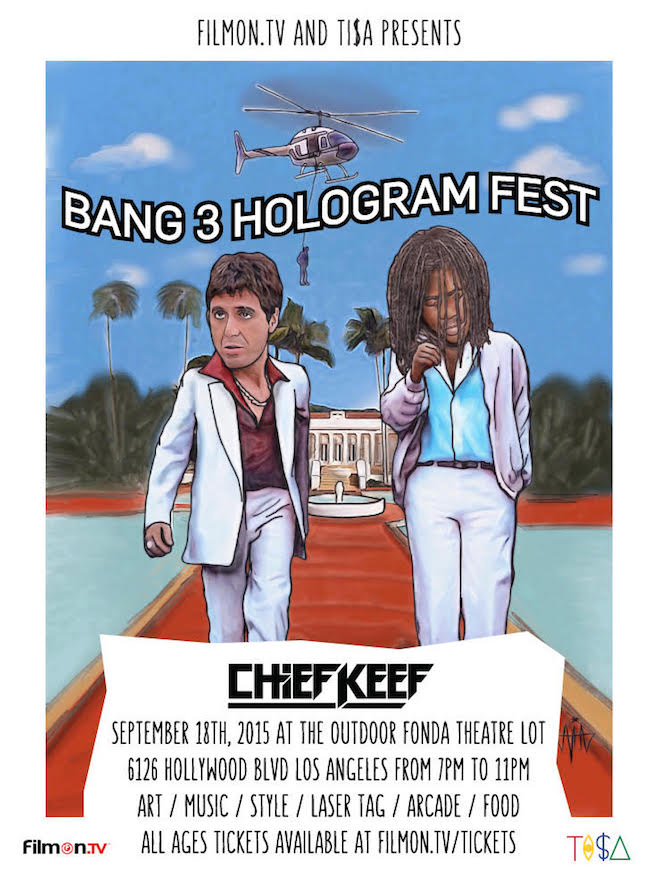 Seemingly backing Keef all the way, Alki David, CEO of FilmOn and Hologram USA, was very disappointed by the decision made by AEG and the venue, blaming the Mayor’s laissez-faire politics:

AEG and the Fonda Theater have continued the shameful cycle of blaming hip-hop and the artistic expression of urban youth for their own corporate malfeasance. This follows on the Chicago Mayor Rahm Emanuel’s attempts to silence Keef and scapegoat him for his city’s complete inability to solve the war-zone like crisis on the South Side, and on the Madison Square Garden Company’s bumbling attempt to back out of a tri-city peace concert to benefit the family of a murdered baby.

Keef has also responded eloquently to the events:

And, somewhat less colourful, here is my official response:

Australia probably won’t let Keef in to perform, but I think we should at least allow his hologram.

Since it seems we won’t be seeing Chief Keef perform anytime soon, you can stream his new album on Spotify.