This time last week, I spent an entire morning listening to the new Justin Bieber track and writing a confessional piece about liking the song. We also went on to detail his recent appearance on Jimmy Fallon, which included a really genuine interview and a great performance. I hinted at my past of being a closet Belieber, but didn’t divulge to the extent it went. I have Baby and Beauty And A Beat on my iTunes. They’re on my ‘get pumped’  playlists. Holy hair-bleach, I think they each spent some time in my Top 25 Most Played. So there, those are all my cards, down on the table for everyone to see. This morning noticed that I had never clicked Private Session on Spotify, my data is out there in the world. I have quite possibly single-handedly been responsible for pushing What Do You Mean into record breaking territory.

Over the past week, I have been confronted time and time again by my new status as a Belieber by people I had angered, for apparently, I had shown them the light.  Here’s a short compilation of some of the conversations I’ve had recently: 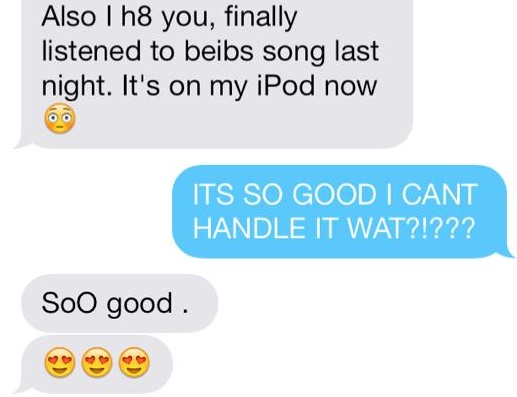 Sorry everyone, but in an effort to make up for my (apparently very rudely) making you realise you’re a Belieber, I’ve put together a little How-To Guide for accepting your new life as a Belieber and moving forward.