Odd Future captain and unapologetic antagonist Tyler, The Creator has reached out to One Direction outcast Zayn Malik on Twitter today, evidently seeking some kind of collaborative effort between the two. 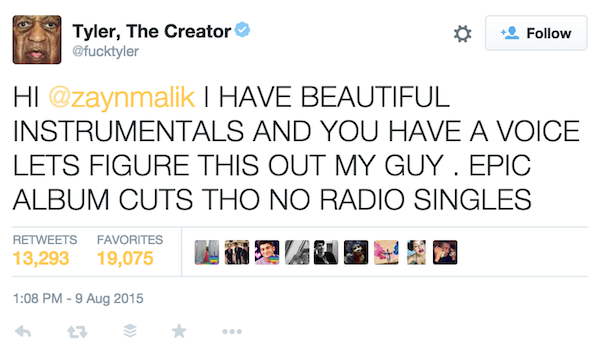 As with most everything Tyler says, ever, it’s kind of difficult to tell just how far he’s taking the proverbial piss here. In the past he has made little secret of his disdain for One Direction and their legion of fans who are borderline psychotic in their devotion to the pop music, calling out those same fans on the Earl Sweatshirt cut Sasquatch and then with a thinly-veiled threat towards the group itself on his own 2013 track Domo23.

Perhaps Tyler feels some kind of kinship with Zayn, the pair of them having distanced themselves from their respective groups this year to one degree or another. Maybe he feels working with Zayn would be to flip One Direction and its saccharine fans the ultimate bird. Who knows.

At the end of the day, I’m not entirely sure how well Zayn’s teen-pop voice would mesh with Tyler’s ‘BEAUTIFUL INSTRUMENTALS’, but it would certainly make for a fascinating, odd couple style collab, one that could be even more interesting if the pair were to spend a couple of ‘EPIC ALBUM CUTS’ dragging One Direction.