Canadian alternative R&B singer The Weeknd (Abel Tesfaye) has enjoyed great success of late. His last three singles have all hit Top 5 on the Billboard Charts (with can’t Feel My Face reaching Number One) and he’s got a hotly anticipated sophomore album, Beauty Behind the Madness, set to drop this week. Ahead of that release, he’s come out with a video for not one, but two, of the tracks off the album.

The clip opens with the Kanye West co-produced Tell Your Friends and it has an air of No Country For Old Men desert surrealism about it. It shows Tesfaye burring himself alive in a sparse, dark landscape. Both the plastic wrapped burial victim and the murderer versions of Tesfaye sing and it’s particularly disturbing. Shortly after, he shoots dead the creepy dude from the Cant Feel My Face video. You know, the one who looks strangely like Bill Nighy if he had signed on to do another terrible vampire movie in which he was even more undead and sporting a nose ring. 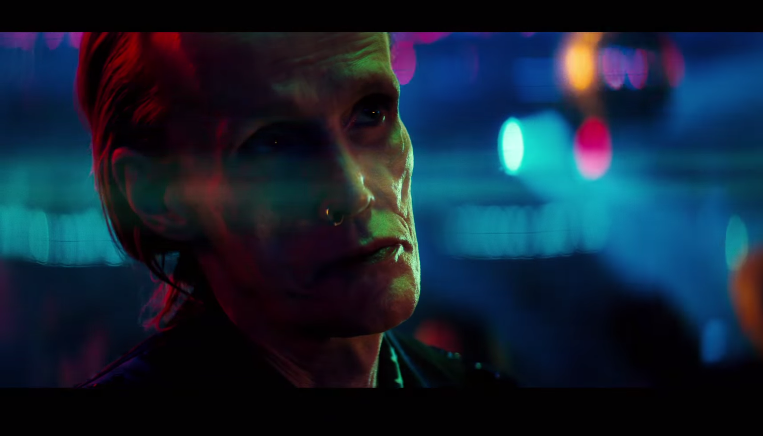 Tesfaye promptly dances back to his car, where another one of his tracks Real Life is already playing on the radio for his drive off down the highway. The comparisons with David Lynch’s Lost Highway and the Kanye’s own Spike Jonez-co-directed video for Flashing Lights are already being drawn across music media outlets. The entire 4 minute clip was directed by Grant Singer and is a captivatingly creepy way to kick off The Weeknd’s Beauty Behind The Madness release week.

Aside from Kanye, the album features a number of other high profile collaborations, including Lana Del Rey and Max Martin – a new direction for the artist which has certainly resulted in a more mainstream (which is not to say lesser by any means) approach. Tesfaye spoke to Rolling Stone of the collaboration with Martin, saying that “At first I was kind of iffy about it… Five years ago? Definitely not. I was the young starving artist that wanted to do it all by myself.”