Check out our full photo gallery of MØ & Elliphant here

I’ll admit it: having been repeatedly exposed to the music video for the MØ-featuring Major Lazer and DJ Snake’s Lean On, which features MØ singing and dancing in a variety of culturally inappropriate outfits, I was under the impression that she was rather one-dimensional. Adorned in bindis, kohl and little else she became in my mind the poster girl for white women trying to access their ‘exotic’ side. This image that I had couldn’t have been more wrong.

Walking down the stairs into OAF the excitement is tangible. The crowd is mostly sober. They aren’t here to get fucked up, they’re here for their girl. When she finally does come on stage, MØ is refreshingly low-key, so much so that I initially mistake her for one of the band members. Dressed in a t-shirt adorned with the words ‘DEATH METAL’, a tight, utilitarian bun and not a scrap of makeup, MØ looks more like the androgynous member of a metal band than one of the biggest up-and-coming names in pop electronica. 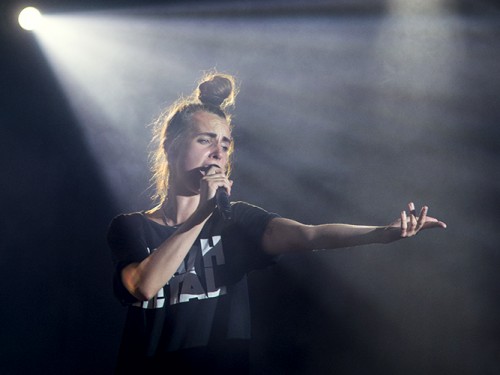 Devoid of any pretence, MØ connects with her audience instantly. She is raw, authentic, completely unassuming. It isn’t often that a female artist stands on stage and just doesn’t give a fuck what she looks like. She lets her face distort into absurd shapes, she allows her forehead get sweaty and her bun get messier as the night goes on. All in all, these physical touches somehow accumulate to build an incredible sense of honesty.

I find myself becoming completely lost in the sound, such is her power to truly feel her music and convey that feeling to her audience. The barriers between audience and artist truly are non-existent. MØ spontaneously jumps into the crowd two or three times during the evening. You can tell that she feeds off the energy of the crowd just as we feed off hers.

What strikes me most about MØ, and perhaps what I was most wrong about, is the incredible influence she takes from other musical genres. She’s no simple pop/electronica artist. In 2007 MØ and her friend Josefine Struckmann formed the punk duo MOR, which lasted until 2012. As a child MØ got into music via the Spice Girls, but was heavily influenced by punk music as well as anti-fascist movements in her teens and early twenties. Bands such as Black Flag, Nirvana and the Yeah Yeah Yeahs are heavily present in MØ’s gutsy sound alongside more recent electronic influences.

For their part, Oxford Art Factory do a really good job of keeping the crowds in line. Whilst waiting for my friends on the staircase I am told to wait somewhere else. Standing in line for drinks my friend and I are told to move further along the bar. Standing pretty much anywhere that isn’t right in front of the stage gets some kind of reprimand.

With two strikes to their name and a fascist state government keeping tabs on their every movement, its no wonder things are a little strict. Music venues have been under an incredible amount of police surveillance since the lockout laws, and with The Imperial Hotel receiving their second mandate to shut down for 72 hours this month, the threat of OAF losing their liquor license is very real. They didn’t let it taint the night though. That in mind, nothing could take away from MØ’s incredible performance, she is fucking awesome.