Leeds-based rock band Pulled Apart By Horses are heading back to Australia for a headline tour later this year. With their rich vocals, heavy riffs, huge drums and catchy melodies, they’ve firmly established themselves as one of the UK’s best alt-rock exports. We wanted to get to know them a little better before they head back down under, so we asked lead singer Tom to share some of his favourite tunes with us.

My favourite track to wake up to is…  Death From Above 1979, Turn it Out
This is my ultimate wake up track! I sleep really heavily and I’m a really crap morning person so this track combined with coffee is the ultimate ‘wake the fuck up and get on with your day.’

The best track for cooking is… ACDC – Highway To Hell
I listen to a lot of BBC 6Music or Absolute Classic Rock FM when I’m cooking so there’s a couple of different avenue’s to take. ACDC are the perfect classic rock band, simple as fuck but powerful and driving. This track has the perfect pace to keep the momentum up in the kitchen yet will give things an extra hellish toasting! I think it would enhance a chili to its maximum potential.

The best track for spring cleaning is…  OutKast, So Fresh and So Clean
It does what it says on the tin. A sexy track about cleaning OR being clean. It’s gentle and calming, smooth and funky – which matches the way you feel with that Sunday hangover when you realise your house is a shit tip and it needs sorting out PRONTO but find it hard to function. Think of it like the pied piper hypnotising you.

The ultimate road trip track is… James Gang, Funk #49
This has a ‘1970’s cruising down the highway in an RV in the American summer’ sort of vibe about it – plus my dad used to play it in his car all the time, so to me it feels like a classic road trip tune!

My favourite love song is… 13th Floor Elevators, Don’t Fall Down
These guys are 1960’s psychedelic wizards, that usually freak the fuck out of people’s minds / third eye. Lyrically, this is a really sweet love song about 2 people equally needing each other, yet it’s still mystical and cool at the same time and not gushy at all.

The best track for sweet, sweet lovemakin’ is…  Mac DeMarco, Chamber of Reflection
This is one dammmmnnn sexy song. The synth line is like melted sexual chocolate and the bass line is so warm and fuzzy. It makes me want to light a few candles, pour some honey, run a bath and turn the Xbox on…. I don’t know why though.

The track that always gets the party started is… At The Drive In, One Armed Scissor
The amount of times I’ve been at a house party and somebody’s kitchen has been trashed within the first 2 secs of this track starting is ridiculous!

The best track to wind down a crowd is… Robert Palmer, Addicted To Love
Our sound man Giles plays this straight after our set, it’s the perfect set follower. Whatever’s gone down, the sweat, chaos, noise, intensity….. this track just totally cuts through it all and takes everything back to a cool neutral. The lights are on…. but you’re not home. It’s so true… so deep. So feels.

My favourite drunken karaoke track is… Michael Jackson, Earth Song
I’ve done this on Karaoke a good few times. It has everything, emotion, powerful, pain, tension. The climax of the song is fun, it works even better if you drop to you knee’s with your arms open…. just like Michael did. Drop a couple of ‘f – bombs’ into the lyrics to spice things up and add some extra passion. If you’re too pissed you can pretend you’re doing the Onkar Judge version instead….

My favourite song to sing in the shower is… Ariel Pink’s haunted graffiti, Round and Round
This song could easily be the answer to every one of these questions but it’s a good sing along track. I’ve sung it in the shower loads and times, the tempo’s also an excellent scrubbing tempo.

A song that always makes me cry is…  Johnny Cash, Hurt
Even though it’s originally a Nine Inch Nails song, Mr. Cash totally took ownership of it and made it his own. One of the last recordings he ever made and was recorded shortly after he lost his wife, June Carter. There’s so much pain in his voice, it’s heartbreaking stuff!

I love going to sleep listening to… Joanna Newsom, Peach, Plum Pear
When I was younger, I would fall asleep listening to anything, especially heavier stuff – Nirvana, Foo Fighters, Marilyn Manson, Led Zeppelin. But when I’m on tour I hear so much heavy music that it’s a nice palette cleanser to fall asleep listening to something mellow and dreamy. Joanna Newsom is beautiful, in every sense of the word. I see her almost like a spiritual guide, a gorgeous, enchanting pixie / light anomaly, that visits me every now and then to soothe me with power of the harp.

I can’t stop dancing when I hear…. Amerie, 1 Thing
Only the greatest pop song ever crafted. This is a 100% banger. Whenever I feel like this I become overwhelmed with the ability to want to shake my ass and waggle my finger like a diva / Sonic the Hedgehog. 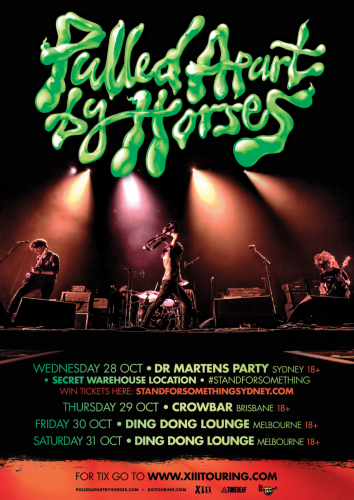