I knew this album was going to be good, but I didn’t anticipate that we were going to receive what could possibly be one of the best albums in Brisbane and even Australian history. Big call I know, but sometimes they need to be made and it’s not a call I make lightly. Moses Gunn Collective‘s debut album Mercy Mountain is a classic album, and I think what we’re about to see here is the next Brisbane band to go big. They’ve got all of the right factors in place with a good team behind them, but most importantly, they’ve got an outstanding piece of work to present.

Thirteen tracks, each offering something different and the best part is none of it is filler. There is something to get pulled into on each track. It’s all consuming, and takes you to where you want to go – even if you didn’t know where that was. It’s pop music like you want it, but it’s so much more than that. There are tastes of psych, funk, blues, prog rock, country and more throughout, intertwined into something entirely of their own creation. Add to that the vast amount of influences like Prince, The Doors, T-Rex, even more recently Tame Impala, but all melded in with Moses Gunn’s signature sound palette and flair, and you can kind of get a grasp of just what is going on in Mercy Mountain.

Stellar examples like Hole in the Wall, a song which highlights the group’s understanding of melody, show the untapped potential of the band. Meticulously but effortlessly creating hooks and with attention to detail, Moses Gunn show off how natural songwriting is to them, and they show it off so well. Meanwhile, tracks like New Romantic Novocaine where the band gets electronic and sound pretty fucking massive when paired with a hypnotic chorus, shows off the band’s somewhat surprising knack for production. Other stand outs such as the electrifying Colour Television and the infectious Desdamona, to the sprawling Neighbourhood highlight even more versatility in the band’s sound, and once again their ease and prowess when it comes to songwriting.

Mercy Mountain is thoroughly enjoyable, and is really all you could ever ask for from an album experience. Seriously, what a treat. Holy fuck. Thank you Moses Gunn Collective. You can buy it here, and I strongly urge you to do so. The band are also on tour later this month, you can check those dates below! 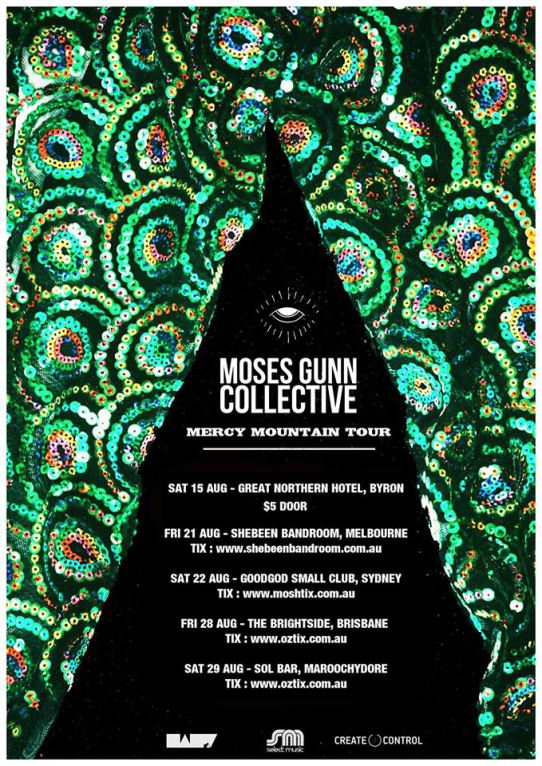