Yasiin Bey, also known as Mos Def, has just raised above hip hop beefs, and presented his own challenge – to any and all rappers out there.

In a new video, he claims that he, along with Black Thought and King Los, can beat anyone and everyone in a rap battle. Here’s what he had to say (thanks AFH for the transcript):

“Me, Black Thought, [and] King Los [versus] anybody—everybody! [We will] battle anybody; I don’t care who you tell. Red Bull Music Academy, put up a [million dollars] on that. We’ll give our winnings to charity and take your money too. I’m tired of these dudes pretendin’ like they’re dope. You’re alright, but relax! Dope niggas that think they dope—you ain’t as dope as you think. You cool, but you ain’t that deal. We don’t have to make no back-and-forth corny records about it, we can put it on its feet for the world to see.” Despite his smirk, Yasiin alluded that this is a continuation of something he said in 2010, at New Orleans, Louisiana’s Superdome—not at all a joke. “And I’m dead-ass serious—I know n*ggas be thinkin’ I’m crazy or whateva, I ain’t playin’.” Yasiin urged anybody that takes the message as a threat to put up their best work. “[This proposition] go for any set, any time—champion sound, for real. So let’s go. The word is out.”

The challenge obviously takes aim at the ridiculous Drake x Meek Mill beef that has inexplicably dominated even the most revered and well-opined music websites over the past few weeks. As someone who has never been a big Drizzy fan and genuinely cannot fathom the appeal of Mill, I can only hope that this challenge will take up more of that spotlight in coming weeks.

The best part about it is that it’s not a beef, it’s a challenge. It’s about hip hop, not about disses. I wonder if it’ll actually materialise.

The first rapper to respond to Bey’s challenge is none other than Lupe Fiasco, who made a triumphant return to the forefront of hip hop earlier this year, with the potent Tetsuo & Youth.

Taking to Instagram, the 33-year-old posted one meme and took aim at Drake (referencing Quentin Miller, whom Drake has been accused of using as a ghost writer): 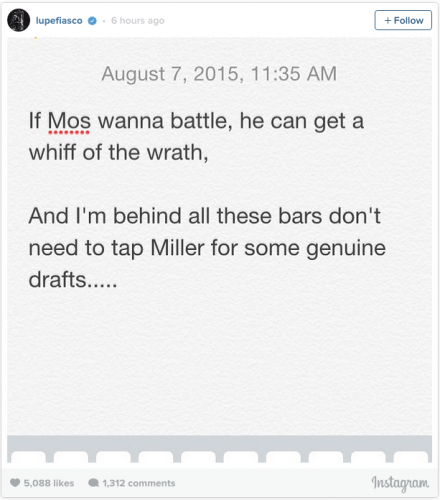 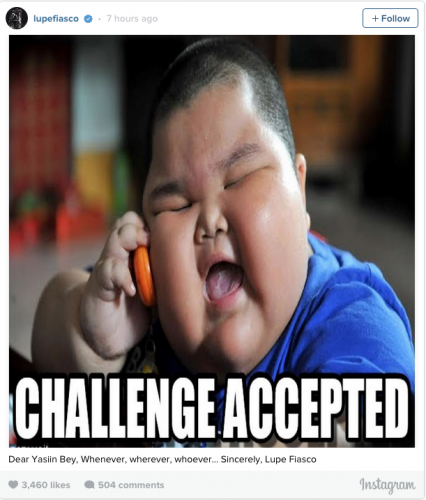 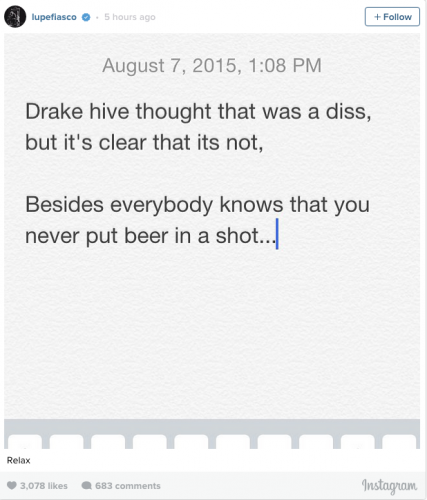 Bey will be in town later this year, where he will be performing as Black Star at Soulfest, alongside Talib Kweli (read our interview with Kweli here).