Female musicians are banding together and speaking out against sexist, misogynist and often abusive behaviour from fans, which they say they deal with on a daily basis.

Most recently, Canada’s thriving electronic songstress Grimes has revealed everything from vile, personal messages she receives to the physical danger she feels when performing on stage.

“I get threats constantly—all female musicians do,” she said in an interview with The Fader. “People want to, like, rape and kill you. It’s, like, part of the job.”

Grimes talks of how her rapid rise to fame brought a legion of fans, who loved her quickly and all at once – which could become overwhelming at times, and brought a myriad of problems.

“One time I was backstage at a show, and there was this random guy in my dressing room, and he just grabbed me and started making out with me, and I was like, Ah!, and pushed him off. Then he went, ‘Ha! I kiss-raped you’ and left. Shit like that happens quasi-frequently.”

But when it isn’t explicit sexual abuse, it comes in the form of implicit and everyday sexism from producers and other artists. As a self-producing, ass-kicking electronic artist, Grimes has a mastery of her equipment.

“I’m a producer and I spend all day looking at fucking graphs and EQs and doing really technical work,” she said.

Yet despite this, she laments that engineers barely take her seriously and will rarely let her touch the equipment herself.

As a result, her new album will feature several diss-tracks aimed at these male producers, who more often than not come crawling back after realising that she was not an air-head as they had presumed all along.

The wonderful and extremely talented Montaigne shared her contempt for this mysoginy, and came out in support of Grimes on Facebook, demonstrating how widespread the problem is. 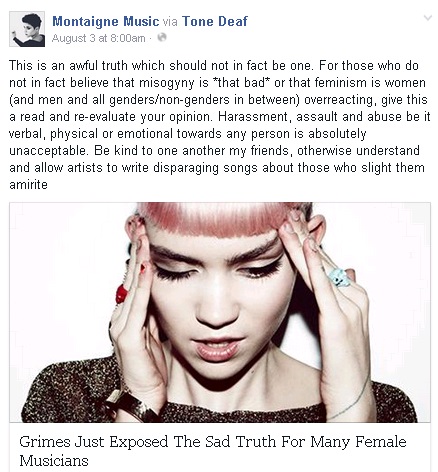 Several other artists have mirrored this sentiment, namely the lead singer of CHVRCHES Laura Mayberry in an op-ed in the Guardian back in 2013.

As a band shaped and brought into being through the Internet, Mayberry accepts that CHVRCHES owe a lot to the people that helped kick start their success, however this does not meant that she should lie down and accept the abuse that the Internet churns up. 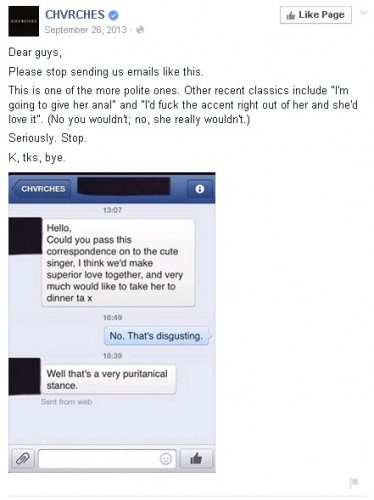 While also receiving extremely positive messages from fans, Mayberry has read all of the rest that stream through their Facebook page as well. Some of the more disgusting she revealed to the Guardian:

As she reflects, these comments have come solely from men but assures that this has nothing to do with hating men but rather comes from her feminist standpoint of equality of the genders.

“Is the casual objectification of women so commonplace that we should all just suck it up, roll over and accept defeat? I hope not.”

Ultimately, the Internet provides a murky arena in which our anonymity allows us to forego responsibility and culpability for our words and our actions. However, this everyday sexism permeates more than just the music industry and is by no means contained to it. However, with more female artists coming together and exposing the dangers – both physically and mentally – they suffer from these misogynistic people, hopefully the conversation can continue and progress to a point where artists, and particularly female artists can go about their passion without fearing for their safety.