As I’m sure she would have always wanted, Nicki Minaj has forever been immortalised in wax. The Madam Tussauds in Las Vegas unveiled the provocative figure of Nicki Minaj, posing in the well renowned, leave-nothing-to-the-imagination Anaconda pose.

The figure took almost six months and 20 wax artists using exact body measurements to complete – creating a rather wonderful mental image of 20 adults measuring and sculpting Nicki Minaj’s curves. Somehow Minaj missed the memo, as she sent out shocked tweets at the reveal of the figure, even though her back-up dancers were present at the unveiling. Madam Tussauds would be proud to note that few could be sure which figures were wax, with many believing that the back up dancers were also sculpted at the museum. Minaj went on to post a LOT of photos of the figure on her Instagram. 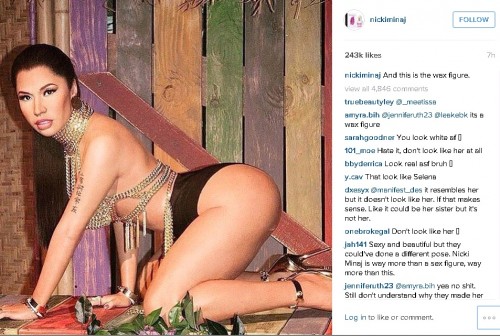 Despite looking somewhat (or completely) ridiculous, it will immortalise Minaj in her most defining music video, as she blatantly discussed early recently in a public spat with Taylor Swift when she missed out on a nomination for the MTV Music Video Awards.

However, Minaj isn’t the only controversial figure to grace the Las Vegas museum, as it is also home to Miley Cyrus and her beloved Wrecking Ball.

As Minaj notes, she is the first female rapper to be honoured in the museum.