With over 250,000 followers on his Youtube channel, US rapper Lil Dicky, real name David Burd, has become an increasingly formidable presence on the video-sharing platform throughout the past two years. He’s now setting up to move beyond Youtube and into the mainstream of hip-hop – and he’s kicking things off with a new video, before diving right into a forthcoming full-length album.

Burd started his rap and video career two years ago with his first upload, a rap parody of The Lion King. He didn’t really stick with parody though, and instead started writing raps and shooting clips for his tracks based around his life and personal experiences. His video for Ex-Boyfriend, a track about running into his girlfriend’s gorgeous, fit and well-endowed ex, clocked more than a million views in 24 hours, and today has more than 10.5 mil. While yes, Burd achieves a harmony between his flow and comedic lyrics, which is very impressive and entertaining, it’s also the subject matter that makes him so enjoyable to listen to. While other rappers are writing about their rich lifestyle or their hardships, Lil Dicky sits in the middle. Whether he’s rapping about having a night in instead of going to the club, being a white guy, being Jewish, getting way too stoned or getting way too wrecked at a pre-drinks – it’s fun to listen to. They’re stories, like one you might hear from a friend – but instead of taking ages to tell and maybe not getting the point across, Dicky kills it in a rap track. 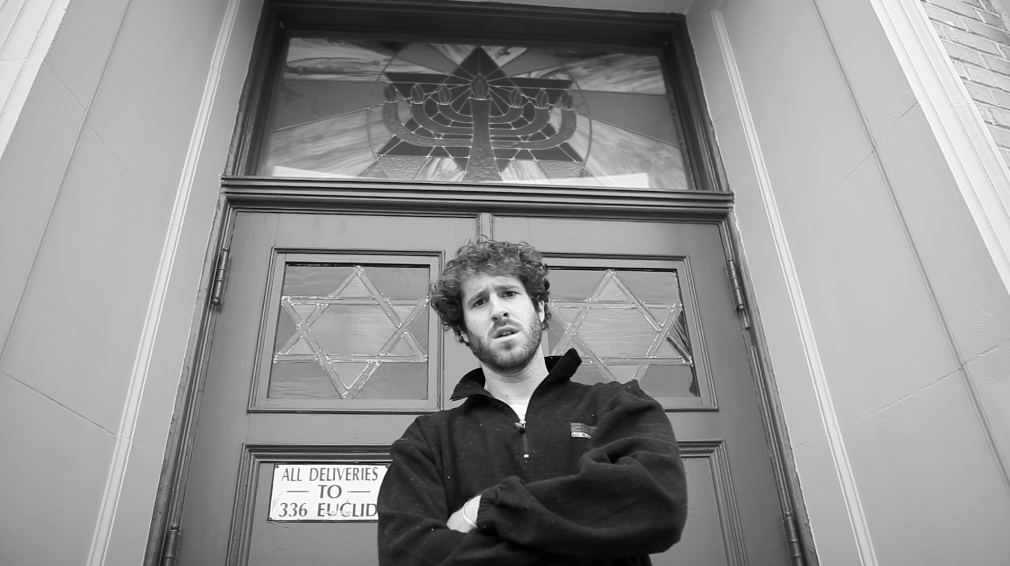 That’s where his latest track and video come in. Professional Rapper is Dicky’s pitch to Snoop Dogg (what an amazing feature), the head of Rap Game Inc., to show him what he’s got and give him a shot. Snoop asks for a brief summary of Dicky’s history, and when he asks “So real shit you ain’t never had to struggle for much?” he replies with a very different perspective on why he wants to rap.

“I wouldn’t say it like that, we just had a different kind of trap / Well I ain’t never had a tool, but I had to be the man at school / like I was doing shit I had to do so when I finished undergrad, I’m cool and I can get the job I wanted / and I saw it quick all the flaws that be coming when you grow up like that / know you been racing them rats, you ain’t been making them raps.”

He admits that he got his career started with saved Bar Mitzvah money, and that though he didn’t have nothing to lose, the fact that he gave everything up to pursue rap shows that he wanted it real bad. And then he says that wants to do it differently.. He lists point after point about why he’s good and why he’s going to be successful. His flow is crazy, his rhythm is never predictable, his lyrics are clever, and “nobody else be doin’ funny type rap.” Though Snoop is wary, Dicky goes on to say that he’s doing this because he just wants to be great, and that he’s just going to keep trying because it’s something he loves. He wants to show other people that that “you ain’t gotta be resigned to the highway/ you can make a path while these motherfuckers drive straight” – and Snoop gives him a shot.

Lil Dicky seems like a different kind of rapper than we’re used to. Though other musicians and performers have gone the funny route (something he addresses in another track – “Better stop comparing me to Andy Milanokis / Andy Samberg, Adam Sandler, man I swear it’s so obnoxious / I don’t care about the rarity of care-free sone topics / The hilarity and parody is not what’s got you noddin’ when I write”), this track alone has made me respect him as a person, and I really want him to succeed. His first album, Professional Rapper, dropped the same day that this track was released, and I bought it as soon as I heard this.

Lil Dicky’s chasing his dream as hard as he can, and aside from the fact that I like his music – I want him to succeed because I feel like he could be a symbol for not doing the usual shit and doing it well, and that’s something that needs to be promoted more often.