We recently shared New York producer Jai Wolf‘s debut single Indian Summer in one of our ‘best new music’ playlists, so we’re pretty damn excited to announce that the talented 23-year-old will be visiting Australia. Arriving in October, just in time for our Australian Summer to kick off, he’ll be visiting Sydney, Melbourne, Brisbane, Canberra and Perth.

Indian Summer was Jai’s first official release, but prior to that, he’d developed quite the reputation for remarkable remixes. The most notable of these was a mix of Skrillex‘s Ease My Mind. Old mate Skrilly reportedly heard it via Twitter, and liked it so much that he now plays it live all the time – the power of the internet!

Anyway, the single was released under Foreign Family Collective, a new label founded by electronic duo, Odesza (read our interview with them here.) As you might expect when an artist founds their own label, the track has a floaty, crystalline Odesza-esque vibe to it, but with a distinct kind of rhythmic diversity and colour that’s setting him apart from the crowd. I for one am excited to see what the future holds for this future-beats artist.

Odesza will actually be in the country literally days before Jai Wolf’s tour for Listen Out festival – so who knows, maybe they’ll stick around for a guest appearance on the Indian Summer tour.

Having already played renowned festivals like Coachella and Bonnaroo, this is sure to be an exciting debut tour for the young producer. 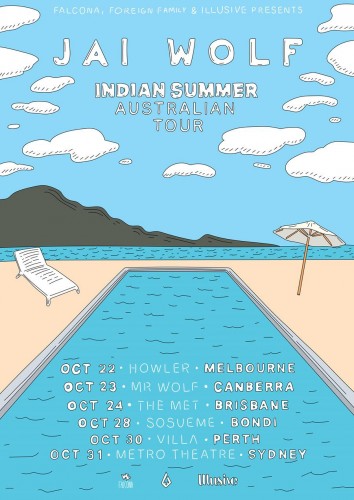