Sir Elton John has taken to twitter recently to vent his frustrations at the mayor of Venice, Italy’s decision to ban books which educate on homosexuality from the city’s schools. Luigi Brugnaro recently banished 49 books that touch on issues of homosexuality, discrimination and same sex marriage and families.

A proud advocate for gay rights, John has two sons, and has been married to his partner David Furnish since gay marriage became legal in England in 2014. He has copped flack in the past for speaking out on issues of homosexuality and homophobia, most famously and perhaps most hilariously for when he described Jesus Christ as a “compassionate, super-intelligent gay man who understood human problems.”

In criticism of Brugnaro’s actions Elton John posted a picture of his son’s favourite book, The Family Book, which outlines many different kind of family structures. 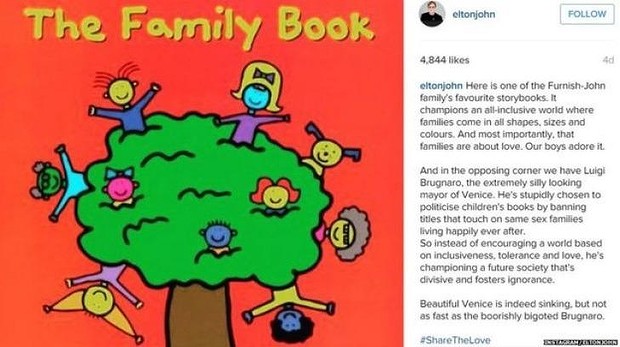 Alongside this he posted some rather inflammatory comments:

“Here is one of the Furnish-John family’s favourite storybooks. It champions an all-inclusive world where families come in all shapes, sizes and colours. And most importantly, that families are about love. Our boys adore it.

In the opposing corner we have Luigi Brugnaro, the extremely silly looking mayor of Venice. He’s stupidly chosen to politicise children’s books by banning titles that touch on same sex families living happily ever after.

So instead of encouraging a world based on inclusiveness, tolerance and love, he’s championing a future society that’s divisive and fosters ignorance … Beautiful Venice is indeed sinking, but not as fast as the boorishly bigoted Brugnaro,” Elton wrote.

Brugnaro responded to John on twitter, claiming that he “represented the arrogance of someone who is rich and can do whatever they want.”

This all comes amidst a tide of gay marriage debate in Australia, particularly following last night’s explosive Q&A which discussed the issue. With such strong, prominent voices coming out against gay marriage in Australia its nice to know we have the support of a few superstars.