In a twist of reality that is almost too fantastic to be true, Run The Jewels will be playing at the opening of street artist Banksy’s weird and wonderful interactive art creation, Dismaland in September. If you haven’t heard about the project all you need to know is that it is a macabre take on the happiest place on earth. And there’s other musical guests, including Massive Attack, Pussy Riot and Peanut Butter Wolf.

In the lead up to the show Banksy sat down with Killer Mike and El-P to talk about the politics of art, whether it be graffiti or music, and the exciting prospect of the British street artists nightmarish amusement park parody.

There is plenty of insight from the Run the Jewels duo on the difficulty of making challenging art, but Banksy steals the show with his disdain for consumerism and his warped sense of humour. “The magazine publishing this interview suggested the following conversation topics: pressure to conform, creative expression and corporate sponsorship, who are the bravest artists you know, what’s the future going to look like in your respective art forms? So yeah… what they said” he begins. And it’s a winding rabbit hole of observations and camaraderie from there.

El-P notedly points out the bravery of graffiti artists in pursuit of their craft, drawing attention to the risks they take with their lives and their freedom in the face of law enforcement, and increasingly dangerous landscapes. Banksy gets deep when he asks if the pair would rather be remembered as great artists or nice people. El-P muses before concluding “I don’t get paid to be a nice guy” and Mike surprises with the endearing statement that “as good as it feels to get my deserved props, the best part of reading social media after I meet folks is reading: “Mike was a nice guy”. I believe being honourable lasts longer than rapping good.”

You can read the full Guardian transcript here:

BANKSY: Thanks for agreeing to play my theme park. Have you ever played in a theme park before?

EL-P I have not yet had the pleasure of playing in a theme park, or enjoying one for that matter.

KILLER MIKE I have not played a theme park. My dream is to play [US theme park] Six Flags Over Georgia before I check out of life. Mostly because they used to have a teen nightclub called Graffiti’s; I was there when I was a kid and that’s where I heard dope music and danced with girls from the suburbs after we snuck in.

The clip of your speech at Ferguson after the verdict [when the jury decided not to charge officer Darren Wilson for the death of unarmed black teenager Michael Brown] made me cry. When did you last cry watching YouTube?

KM The last time YouTube made me cry was watching Dr John Henrik Clarke speak about Marcus Garvey. I was overwhelmed with pain for a great man that was abused and mistreated because he wanted to better the state of blacks globally. It is scary to think a system exists that wishes not to see all people live with human dignity and respect. I did, however, finish feeling encouraged that day will come.

When Kanye came to the UK recently, he played on a dairy farm and declared himself the greatest rock star in the world. Does he have any competition for that?

KM Kanye is amazing and may be the greatest rock star in the world but Rihanna is the new Tupac (in feminist form), and as much as I love rock, ain’t nobody do it like Pac! Ri-Ri rules in my book.

The magazine publishing this interview suggested the following conversation topics: pressure to conform, creative expression and corporate sponsorship, who are the bravest artists you know, what’s the future going to look like in your respective art forms? So yeah… what they said.

EL-P The bravest artists I’ve ever known have always been graf artists. Risking your life and your freedom is no joke. Whoever made Mount Rushmore was probably brave as well, assuming that rock-climbing equipment was not at its zenith at the time.

I like to ask artists this question: if you could choose only one, would you rather be thought of as a great artist or a nice person?

EL-P Interesting question. We all want recognition and validation to an extent for our art, but greatness as a trade for decency is a risky proposition. In my life I try to leave the people I encounter with the feeling that they have been respected and treated with warmth and appreciation. Being known as honorable is way more important to me. But being that my career is in the public and my personal relationships are ultimately private, I suppose, for the sake of the question, being considered a great artist publicly means a bit more than being considered a nice guy publicly. Although I like to think I am thought of in that way. Point being, I don’t get paid to be a nice guy, I just try to be one.

KM I don’t know what the hell the future brings. If I did, I would play the lotto and win the mega millions and buy toy cars, real muscle cars, sneakers and art. I cannot lie: as good as it feels to get my deserved props, the best part of reading social media after I meet folks is reading: “Mike was a nice guy”. I believe being honourable lasts longer than rapping good. 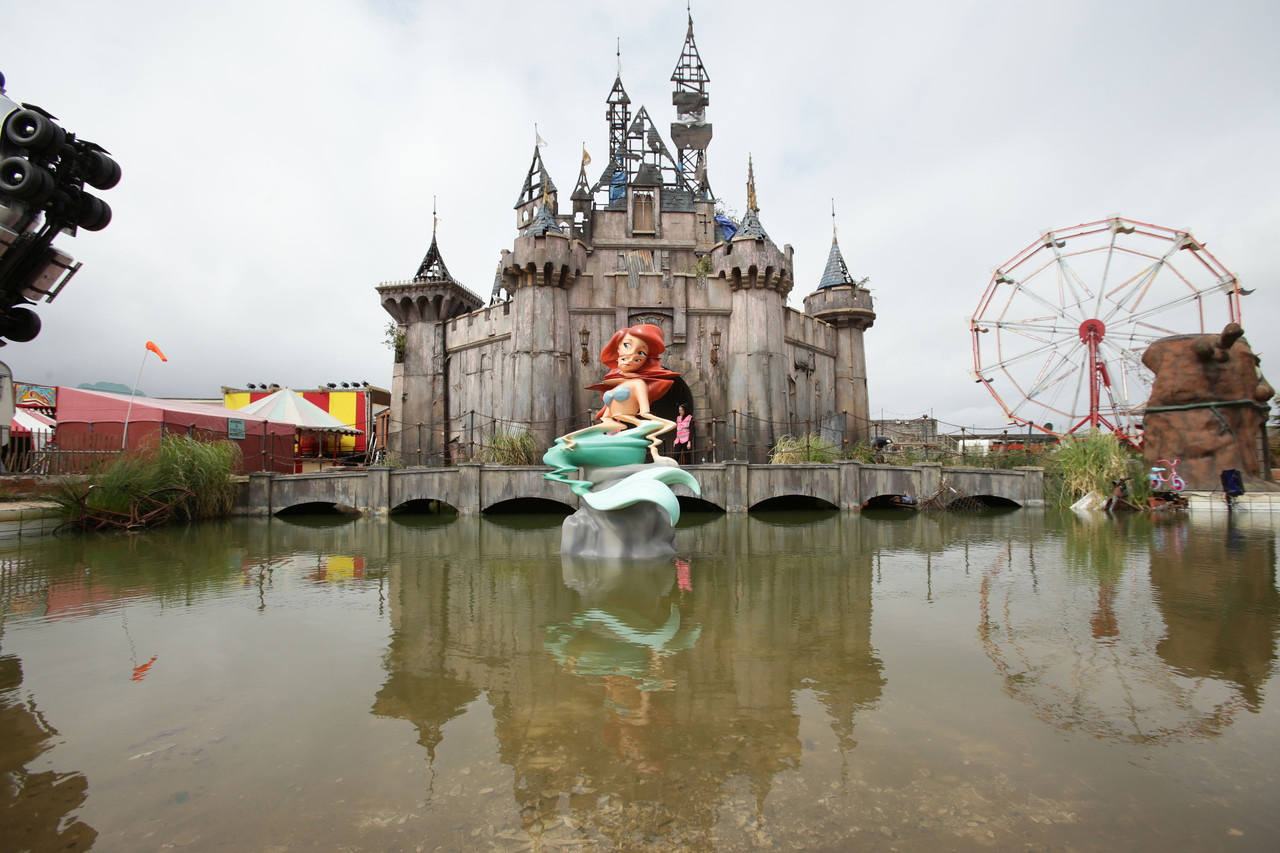 Run the Jewels perform at Dismaland on September 4th. Unluckily for those who like to be super organised, the park has announced it is currently unable to sell online tickets with the statement:

“Due to unprecedented demand ‘the UK’s most disappointing new visitor attraction’ is currently unable to process online ticket sales.”

Tickets are said to be available again from August 25th.