I should preface this interview by saying that Josh Pyke is not really my brother. In fact we aren’t related in any way, but we do have a long history, whether he knows it or not. A running theme throughout his ten-year career is that he bares a striking resemblance to my brother. Whether it be a photo in a street press, or an appearance on Spicks and Specks, friends and family will double take and confusedly wonder, “is that….?” 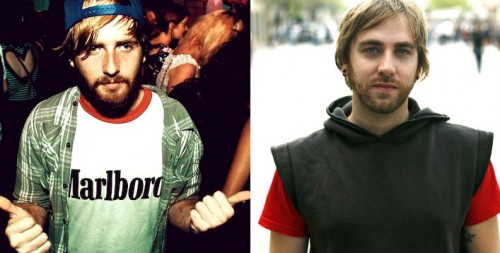 Left, my brother. Right, Josh Pyke. You be the judge.

My brother has taken this in his stride, trying to get backstage at Splendour in the Grass a couple of times (unsuccessfully) and accepting free drinks and photo opportunities from fans (successfully). Now, with this opportunity to speak with Pyke I thought it would be remiss of me not to clear the air and make sure this was not a slight to his name. Was it ok for my brother to continue to impersonate him for his own benefit?

“As long as he isn’t saying anything really racist or homophobic and passing himself off as me, then yeah, that’s fine,” he says with a bemused laugh. To repay the favour, I ask if he could use a body double from time to time, and he jumps at the chance. “Honestly yeah there are loads of times. At the moment I am so flat out doing promo but also getting ready to do these fan first shows. I’ve just been back and forth up to QLD and down to Melbourne just for the day this week, and I am also renovating my studio, which was possibly a stupid decision to start that at the same time. So yeah, there are times when I could definitely sub someone in, so tell him I’ll give him a call.”

And while he doesn’t sound much like my brother, the conversation flows easily. Pyke has an easygoing demeanor and a friendly openness to discussing his work. Album But For All These Shrinking Hearts, out last Friday, signals a new beginning for the singer-songwriter in a way, with a new label and a feeling of self-confidence that he is now just finding for the first time.

“It’s hard to explain but for whatever reason I finally feel like an established artist. And that might sound stupid after five albums, because maybe I should have felt like this a little bit earlier, but I haven’t and the reality is that Australia is such a tiny market that it’s hard to feel established because every time you release a record you kind of feel like you are starting again,” he says, “But this time it’s just because the last album went really well and the touring for that album went better than ever and to be four albums in and to feel like your touring is the best it’s ever been really gave me a bolster of confidence and it led to me feeling quite fearless going into this album.”

When his last album New Ends and Old Beginnings was released in 2013 Pyke said that it was a bit of a book end to his first album Memories and Dust and his best work to date. He has a similar sentiment to this album. When I ask if this fondness of his work at the time of release is a byproduct of feeling so close to each body of work on it’s completion he doesn’t miss a beat before answering.

“Ever since I set out I didn’t want to rest on my laurels, and it’s a completely subjective thing to feel like a particular body of work is your best body of work, but I always wanted to feel that every time I did a record that I felt that it was my best work, otherwise I don’t think I’d feel like there is much point in releasing it. So it doesn’t matter what anyone else thinks, but I feel like this is a step up and my best work lyrically and production wise in particular. It’s a good feeling and it’s the feeling I need to have to bother releasing something to the public really.”

BFATSH is a dense forest of themes with ideas and symbols that shine through the foliage of signature Josh Pyke lyrics. He weaves stories around melodies with a childlike wonder, creating whole universes, contained within minutes. The first single Hollering Hearts is full of joy with an undertone of mortality. “The idea of the hollering heart is the manifestation of that idea where it’s like, the song is about following the thing in life that makes your heart holler and gives you that sense of youthful exuberance that you can sometimes lose as you get older,” he says, “But there is always something in your life that gives you that. The idea of the song is you should follow that and try and get more of that in your life.” It’s an infectious tune, and as Pyke says, one of his most established to date. He has found a pop sensibility that allows him to capture the feeling that makes hearts sing in musical form.

The album has some excellent collaborations including Momentary Glow recorded with Dustin Tebutt and Songlines written with Marcus Azon of Jinja Safari. We talk about the collaboration process, and how it works for an artist who is used to working alone and has songs that are so personal. “When I’m co-writing with people I find it almost impossible to write really good lyrics on the spur of the moment. I can’t really do that. I need to spend a long time and figure out what I am trying to say and refine it. And I can’t really collaborate on lyrics, because I need them to be my own personal voice, it’s just the way it is,” he tells me.

To overcome this, Pyke has taken to employing a vocal technique used by Jeff Tweedy of Wilco where mumbled sounds are used to establish a melody and then translated into lyrical form. “So, I would just come up with the vocal line collaboratively and I’d sing jibberish on the little demos that we would make then I’d take them away on tour. So I went across to the UK and was doing a couple of weeks touring over there, and was listening to the songs on repeat and I’d just slowly translate what the jibberish was saying… And it’s a pretty wild process because you start to hear stuff, and you think, “I’m sure I was saying that”. Then slowly meaning starts to emerge from what you are translating and you kind of build on that. Not every sentence or phrase is translated from the jibberish but key phrases are, and that leads to you being able to fill in the gaps with your conscious mind.”

It is these new approaches and new takes on creativity that make this album such an enjoyable experience. It has all the things that we would expect from a Josh Pyke record, but also a little shove of the envelope here and there to show the artist from a slightly different angle; a shadow cast where there was light before or vice versa. I ask him if he is ever worried that after five albums the ideas might run out? He mentions how he read about Bruce Springsteen’s struggle with writers block and the wise words that his wife gave to him: “There are more songs in you than you’ll have time to write in your lifetime,” she told him, and it is a philosophy that Pyke has adopted.

“Until recently I did think that it would one day all run out. And it’s only recently that I just don’t think that anymore, I just think that there’s more songs in me and more stories to tell than I will ever have time to tell. And maybe in the future it won’t even be through songs. Maybe it will be through something else. I just believe that the creative process is a never ending well. It’s a well that doesn’t run dry, it’s just a matter of figuring out how to tap into that well. And ten years into my career I feel like I have finally accepted that sometimes your not going to have access to it, but there is ways to get back in there, and I think I know those ways now.”

With the album out and fans wildly devouring it, Pyke is about to head out to perform fans first shows in intimate venues around Australia. The shows are reserved for those who pre-ordered the album, and is a way for Pyke to thank those that have supported him since the beginning.

“It’s really just a way for me to acknowledge that without fans you don’t have a career. It’s my way of saying thank you to the core supporters that always come to the shows and jump on the opportunity to buy the new record and pre-order it. I always try and keep them in intimate venues so it’s a cool casual affair, and we have a chat afterwards and hang out a bit. It’s my way of reconnecting with the people that have always supported me and who I owe a lot to, who I basically owe my career to.”

I tell Josh that my brother and I will see him at the Brisbane show and he laughs, “I can’t wait to meet this guy. I’m just anticipating that he is going to be taller, and have a better physique and be younger and better looking than me.” I assure him that my brother has spent many years living under the umbrella of being the less talented, less famous Josh Pyke so there is nothing to worry about. “He’s going to deck me isn’t he!? He is going to be like ‘fuck you for looking like me’,” he asks a little apprehensively.

It is unlikely, but only time will tell. Stay tuned for Part Two when we head to the Black Bear Lodge to bring the two bearded gingers face to face for the first time.

In the meantime head over and buy the album.