Let’s put aside issues of race. Let’s put aside issues of body shaming. Nicki Minaj’s rant about being snubbed by the MTV VMA panel for ‘Video of the Year’ is a case of petulance, pure and simple. After Taylor Swift offered to ‘share the stage’ with Minaj, she retorted, “trust me. I’ll be on that stage to collect my awards for vid of the year”. This is about a culture of entitlement, and a complete lack of grace and sportsmanship amongst artists. I don’t expect people like Nicki Minaj and Kanye West to be role models. I do expect them to be adults. Whining when you don’t win an award is ugly, childish and embarrassing.

The fact that this outrage is directed at the MTV Video Music Awards makes the whole thing evern more farcical. Wait, you’re saying that MTV is not a paragon of virtue committed to the highest ideals of equity and artistic truth? You’re telling me that the network responsible for Engaged and Underage, 16 and Pregnant and Jersey Shore isn’t a champion of artistic merit, and is really just pursuing the lowest common denominator for their exclusively preteen and stoner audience? This is an outrage. There needs to be a Congressional Inquiry. There couldn’t be a contest of less prestige. The VMAs never have, or never will be, a barometer of artistic achievement. Complaining about losing at the VMA’s would be like Halle Berry wrestling Sandra Bullock for her Razzie. Or Nick Cannon spear-tackling Cody Simpson, so that he can soak up that sweet self-assuring slime from the Nickelodeon Kids Choice Awards. Or when a dad flips out at the Auskick presentation night when his sprocket only comes runner-up in the under 6’s least improved category.   Nicki Minaj has been recognized time and time again for her achievements. Chucking a hissy fit over losing out on this most vacuous of awards demonstrates that she is a brat plain and simple. 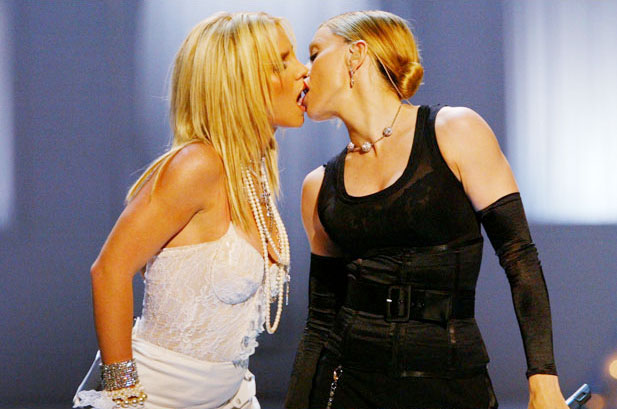 The VMA’s have a long and proud history as an institution of good taste and discernment.

Notice how these artists are quick to point out when they (or their closest friends) are cheated, but don’t feel compelled to speak up for smaller, independent acts that get looked over. They claim to “respect artistry” but what they really respect is themselves. They’re never indignant when someone with whom they have no association is robbed. There’s a real argument that Sia’s Elastic Heart video was the best pop video of the year, after her Chandelier clip lost to Miley Cyrus’ Wrecking Ball in 2014. But no one is in Sia’s corner, because they’re only in their own corner. Or what about FKA Twigs’ Glass & Patron clip? If Kanye West respected artistry he would be bum-rushing the stage saying that FKA Twigs was robbed.

I’ll agree that whilst Minaj’s Anaconda clip is completely asinine, it is iconic; but is there not the possibility, the smallest chance, that despite its iconic status, that a rational person could still subjectively believe that it was not in the top 5 videos of the year? Is there even a modicum of chance that this isn’t a conspiracy, but just someones subjective and honestly held belief? Ed Sheeran’s Thinking Out Loud and Bruno Mars’ Uptown Funk videos were both extremely memorable. Isn’t there a chance that maybe Nicki Minaj didn’t make the top 5 because she just had strong competition?

I find it difficult to believe the snub is due to larger issues of body shaming and racism. For a start, it’s clear that MTV are not involved in some viscous campaign to destroy Minaj’s career. She’s been nominated 10 times for the VMA’s, and has won twice for Best Hip Hop Video and Best Female Video. So they can’t be totally opposed to her image and appearance. Arguably MTV in 2015 are more attuned to black issues than ever before – nominating Kendrick Lamar’s powerful and controversial video for Alright. The video has an important message about black resilience in the face of white oppression. This is a truly commendable move by MTV, given the song is not commercial and not radio friendly. It’s arguable the most progressive video ever been nominated, both in terms of music and message. And if you want to talk about sidelining important social issues, it would have been even more divisive to ignore Taylor Swift’s Bad Blood clip, with it’s feminist undercurrent and message of empowerment.

I don’t think it’s fair to accuse MTV of ignoring social issues for choosing not to give its highest honour to a video that contains the actual lyric “he tossed my salad like his name Romain,” and even more simply and honestly, “I’m on some dumb shit.”

Look at this man. Look at his twisted, pained expression. 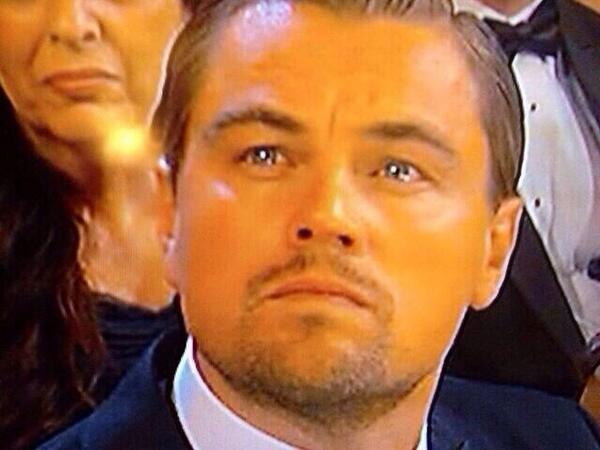 This is the face of a man who has become literally bloated on disappointment. A man who’s been spurned so often by the artistic community, that he was forced to bravely find solace in the sexual embrace of international supermodels. This poor man has been let down more times than he can possibly count. When he lost out to that guy from How To Lose a Guy In 10 Days, he had the good grace to suck up that tide of emotions, put on a brave face for the cameras and then vent in private. He suffered in silence. Can you image the Leonardo tweet?: “if your movie celebrates AIDS stricken men with near skeletal bodies, you will win best actor #dallasbulimiaclub #realmenhavedadbods.” No. You couldn’t. because Leo is from a generation and profession that appreciates good humour, grace and humility. 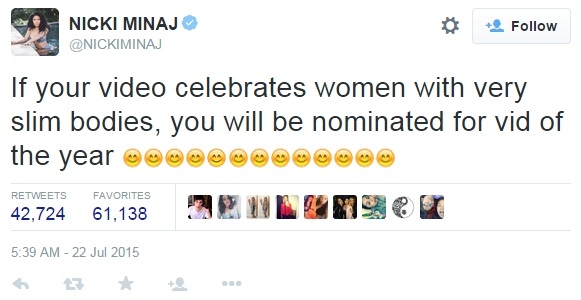 Congratulating Minaj on her ‘stand’ encourages a culture of petulance. It says: if things don’t go your way, make a scene. It says when bad things happen to good people, it must be a conspiracy. It’s like those facile Facebook customer complaints that are carefully engineered so that they go viral. Someone chasing likes by uploading a picture of a slippery floor with a funny rant, because they know the public relations team has been hamstrung from acting with any level of reasonableness in such a public forum. In the world of art you don’t deserve anything. In a totally subjective profession there is no such thing as ‘being robbed’ – because there is no means by which it can be said that one piece of art is quantifiably superior to any other another. There’s no lack of self-belief in the entertainment industry, but part of being a true champion is knowing how to lose graciously.