Caitlyn Jenner is no stranger to the media spotlight. Formerly known as Bruce, Olympic medallist and patriarch of reality TV’s royal family The Kardashians, she recently revealed that she was transgender, and has now re-introduced herself to the world as Caitlyn, in a stunning Vanity Fair spread. Read the entire stunning piece right here.

Having to experience this kind of transition is difficult enough for someone in a small family, let alone a family that the entire world watches, scrutinises and loves to hate. I can’t begin to explain how happy it makes me to see transgender individuals welcomed and accepted into popular culture. As much as we hate to admit it, it’s a primary source of knowledge and reson for a large segment of the population. There’s no easy way to do it; it will be a taboo, controversial topic that makes people feel uneasy for a long time yet. But each step is a small victory – and this is a damn big step.

People have criticised the media handling of Jenner’s transition – we shouldn’t be looking at her appearance, but more at the woman behind it, and so forth.  Jon Stewart hit the nail on the head when he joked, “Welcome to being a woman in America: “It’s really heartening to see that everyone is willing to not only accept Caitlyn Jenner as a woman, but to waste no time in treating her like a woman. You see, Caitlyn, when you were a man, we could talk about your athleticism, your business acumen, but now you’re a woman, and your looks are really the only thing we care about.”

I agree with Stewart’s sentiments, but right now, I’m okay with it. If Caitlyn Jenner is going to start a conversation, I don’t care what that conversation might be. Right now, the most important thing we can do is to welcome Jenner – and literally any other LGBTI topic – into our regular blend of everyday conversation. Let’s make it normal. Let’s make it boring.

Some people haven’t responded so well.

Some people – and not just any people, but people with voices which travel far – have chosen to be ignorant and offensive in their responses. It’s not like we can suddenly expect the world to flip around, magically accepting of everything. But sometimes something happens that just really shocks me.

A couple months ago I was saddened to post this video about little-known rapper Erick Sermon, who candidly claimed that hip hop will never have a place for transgender people.

Now, very, very well-known, and once-revered rapper Snoop Dogg, and rap’s dumbest woman-hater and domestic abuser Chris Brown have taken to Instagram to both post this meme in response to Caitlyn Jenner: 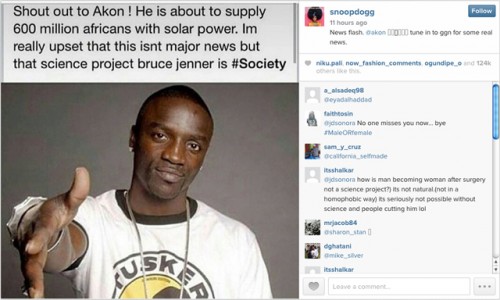 Timbaland posted this too, but later retracted, saying he fully supports Caitlyn and was just reposting this because he thought it was funny. Whatever. 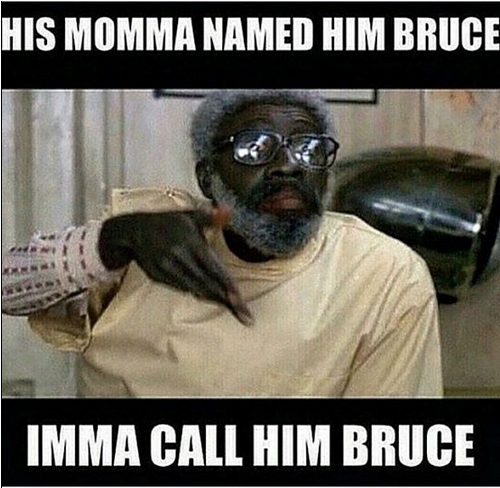 1. It’s great that Akon is taking a break from his career to help those in need. We think it’s great that he’s using his celebrity power to teach the world about an issue many of us wouldn’t have considered otherwise. But the thing is, multiple issues are allowed to exist in the world at once. This argument angers me purely because it’s so invalid. We don’t have to pick between Akon and Caitlyn. They’re different issues, and both are filling up headlines. If anything, transgender acceptance is an issue which faces us in every day life, no matter which country we’re in, so in an immediate sense it’s equally important news to us.

Drawing these issues together is disingenuous and totally pointless. There’s no need to compare the two; it’s simply being used as a way to knock down Caitlyn Jenner and in turn, transgender acceptance. We should all have figured that much out by now.

2. A “Science experiment”
This is a disgusting, hateful thing to say – even for a woman-bashing repeat offender and a guy who once rapped, “You got a bitch that won’t do what you say, she hardheaded, she just won’t obey, you’ve got to put that bitch in her place, Even if it’s slapping her in her face.”  Of all the responses to Jenner’s transition so far, this phrase is among the worst.

I’m the first to admit that rap isn’t exactly known for being a feminist powerhouse. Sometimes, sure. But as a whole it’s pretty terrible. Thing is, most rap – especially party rap and gangsta rap (the worst offenders) are full of hyperbole and fictional tales. I feel weird writing this, because it’s like writing, “oxygen is a thing, gravity also exists,” yet it still surprises so many. Most rappers don’t treat women the way they describe them in their songs (with the exception of Chris Brown, Snoop Dogg and yes, quite a few others,) just like most rappers aren’t actually rapists, murderers and gangsters. Rap isn’t an easy genre to love, and it can be incredibly offensive – but there’s a very big difference between fiction and reality.

This was a real life judgement – and that’s why it’s so bad.

3. Less than two weeks ago, Snoop made global headlines when he told the world he’d seen the error of his misogynistic ways, and that, while he had no regrets about his Bitches Ain’t Shit era lyrics, he has learned to love women, and to see them as beautiful people. But it’s okay to call Caitlyn Jenner a ‘science experiment’?

This Instagram post nearly saw him taken to court earlier this year, after the person in the image received a slew of homophobic and transphobic posts on their social media page: 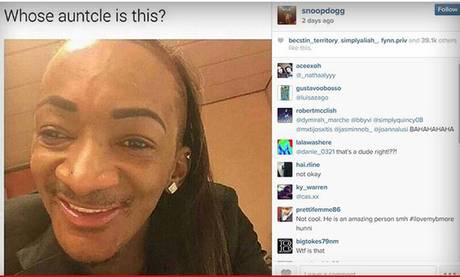 Also, there was this: 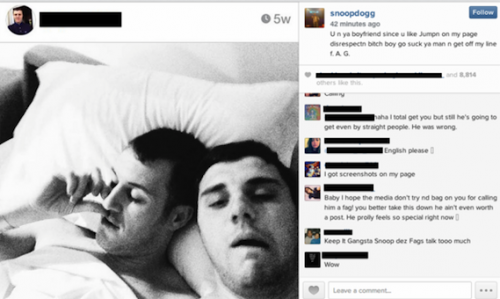 Two years ago, he has this to say about gay acceptance in rap: “Frank Ocean ain’t no rapper. He’s a singer. It’s acceptable in the singing world, but in the rap world I don’t know if it will ever be acceptable because rap is so masculine.
“It’s like a football team. You can’t be in a locker room full of motherfucking tough-ass dudes, then all of a sudden say, ‘Hey, man, I like you.’”

Do we even need to look through Chris Brown’s history?

These guys have let us down. In doing so, they’ve let hip hop down. In a world where a traditionally unaccepting genre is growing more accepting of women, being gay and all kinds of other issues every day, there’s going to be a couple of idiots who ruin it for everywhere. And in this case, it’s Snoop Dogg and Chris Brown. I’ve lost a lot of respect for Snoop Dogg over the course of his admittance of ignorance via social media. He’s really been struggling to stay relevant for a number of years now, and it’s clearer than ever that his opinions are as archaic as his fame. My opinion of Chris Brown has only been re-confirmed.

If they don’t want to accept Caitlyn Jenner or transgender issues a whole, that’s their problem. Fuck them, fuck their music and fuck those who support their beliefs.

The thing is, hip hop WAS once a misogynistic, close-minded, homophobic place, where people like Snoop reigned supreme. But it’s not anymore. It’s just not. Every day, more and more hip hop artists – both underground and mainstream – are talking about issues of acceptance and openness – be it Frank Ocean being openly gay, Mykki Blanco being a transgender pioneer, or other issues such as the mental health of Earl Sweatshirt or Kendrick Lamar. People are open. People are okay with it.

Snoop, Chris; you’re the minority here. Nobody thinks that way anymore. Except you.

Here’s a few people from the hip hop community who are making us proud. The joke posts only show that they’ve accepted Caitlyn as Caitlyn, making them just as powerful as the tweets and ‘grams about courage and pride.

50 Cent posted photos both Kris and Caitlyn Jenner, with a caption above Kris, saying: “Hold the fuck up hoe this bitch look better than me.” 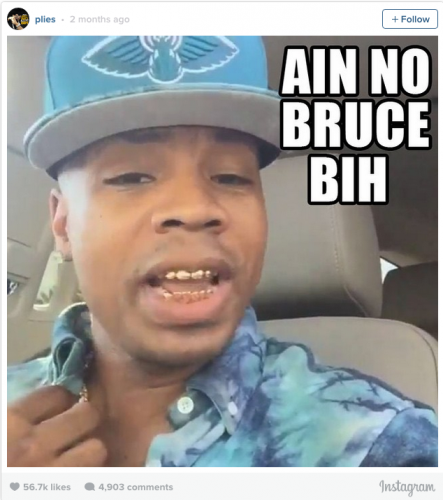 However cool or OG you think you may be, Snoop, you’re not. You’ve lost yourself a lot of respect and a lot of fans. The modern world is not the world you once knew – grow up and learn about acceptance.