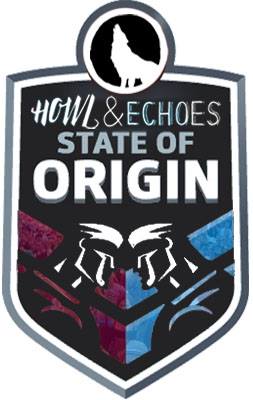 State of Origin is here. That time of year when New South Wales and Queensland sports teams don their colours, go head to head and battle it out on the field – while the rest of us shout profusely at the television. And it’s bloody fun.
Of course, not all of us love sport. Some of us love music – and some us love music AND sport. SO we thought, why stop the rivalry there?
So in true Howl & Echoes style, we have decided to create our very own Musical State of Origin, where we pit the bbest NSW music against the best from QLD.

We’re leaving the winners up to you – there’s little polls next to each category. May the best state win!

There are a lot of sweet maroon-bleeding bands we could have picked for this: Velociraptor, Dune Rats, The John Steel Singers among a whole bunch of others, but we can’t go past Mansfield’s favourite sons; Violent Soho. Possibly the hardest rocking band to come out of this great nation. Shove that up you, everybody south of the border.

First of all, Gang of Youths frontman Dave Le’aupepe already has the distinct advantage of already playing NRL as his alter-ego, Kevin Gordan.

Hair that luscious is hard to disguise.

Gang of Youths also has a serious leg up in terms of stamina – these guys put out seven minute tracks like it ain’t no thing, and their live energy will knock your teeth out. If this was coming towards you, I don’t care who you are – you are going down.

Their sound, too, is ground-shakeable. A mix of soaring Kings of Leon peaks and gravelly, The-National-esque lows, Gang of Youths have the scope of a much more mature band and can take you on journeys you didn’t expect. They’re rabble-rousers in Poison Drum¸ heartbreakers in Knuckles White Dry, cosmic rockers in Radioface. Gang of Youths are the NRL side’s all-rounders. Put them anywhere on the field and they’ll smash through the opposition, and best of all with a smile on their face and a smack on the back. Off the field, these are the guys you want giving you the pep talk in the locker room that will inspire the second-half comeback – these guys have been through some shit, and come out stronger on the other side. Look out QLD – Gang of Youths may be the youngest on the field, but if their debut is anything to go by they’ve got big things ahead.

Some would say Danny Harley, aka The Kite String Tangle is the Jonathan Thurston of electronic music. That is to say he is a leader of the game, who crushes souls with his sheer awesomeness at any given opportunity. Harley’s own favorite track What If from debut record Vessels is stellar and is bound to leave those southerners crying big, sad, blue tears of defeat.

Every team needs someone absolutely huge. Someone to intimidate the other team and know that they shouldn’t be fucked with. For New South Wales, that person is Golden Features. Huge huge sounds, bass whose filth cannot be rivaled, and an emergence onto the scene much like his tackles on the field – out of nowhere. In only a little over a year, Golden Features has proved that he’s one of the biggest on the Electronic field, and now one of the biggest in the Music State of Origin as a whole. Most recently playing a string of club shows Australia wide to promote his latest EP XXI, and yesterday revealed to be returning to Listen Out Festival for the second year in a row, his reputation as a player is well known. If Queensland thinks that they can get past the New South Wales defense, they’d better think again. Golden Features is the big wall of sound that none can penetrate, with the weak being crushed under the weight of his bass. For his teammates, he’s the one who gets them ready for the game. Listen to final track of his latest EP then tell me you that you’re not going to win whatever you’re doing – you’d be lying.

There is no question that there is a bit of a stigma attached to Aussie hip hop, but up in the Sunshine State, that’s starting to shift. More and more acts are challenging your standard raps and rhymes, pushing boundaries with their beats and defying expectations and vocabularies with their lyrics. Brisbane 7 piece Astro Travellers bring it home for me. A bunch of classically trained jazz musicians from the Conservatorium, two astounding emcees and a formidable force with their female singer, I don’t see an act further south than the River City to bring it home for us Queenslanders! Check their first single Future Supernova and try to defy those grooves. Impossible. Take that, NSW!

Do I even need to explain why Thundamentals are our choice to represent New South Wales in this epic head-to-head battle? Lyrically dense and musically brilliant, the beloved hip hop trio have undoubtedly proved themselves to be one of the greatest rap groups in NSW, if not the whole country. With the strength, stamina and lyrical muscle to kick serious hip hop ass, it’s hard to think of a worthy opponent. They’re the only rappers around who can spit rhymes about beef noodle soup, and make it sound badass.

Everyone knows the best thing about going to a big sports game is the electric energy in the audience. In that sense, anyone who has ever been to Thundamentals show knows that there’s many similarities between it and State of Origin: the thunderous cheers, the singing and chanting from the crowd, the sweaty men on stage and (for the winning team anyway) heading home with a beaming smile.

We actually contacted Thundamentals for a comment, and Tuka (who also has some pretty bangin’ solo work out now by the way), sent us back the ultimate pre-game song to get PUMPED UP:

Let’s be real here: anyone who uses the Beastie Boys to pump it up, is gonna go hard as hell. Queensland: watch out.

This one was really tough, because when it comes to amazing nostalgia acts there is no drought in the Sunshine State. We have everything from the seminal Brisbane indie outfit The Go Betweens, to the party inducing tunes of Regurgitator, to the classic rock of Powderfinger. But, if you want to win at the nostalgia game you have to go back – way back. Right back to the smooth toe tapping melodies that got your parents bopping at the Redcliffe RSL. That’s right. We have the BeeGees and we are proud. Let that sweet hook carry you all the way back to the locker rooms NSW. See you next year.

Daniel Johns may have moved onto to different things, but Silverchair will forever be the absolute greatest New South Wales rock band. Dubbed Nirvana in Pyjamas when Frogstomp blasted its way around the world 20 years ago, Silverchair went on to be one of the loudest, angst-iest riff rockers we’ve ever seen. It would be a Pure Massacre on the field. You’ll be wishing it was already Tomorrow, because some freakin’ Madman is coming right for you. You’ll be feeling (Dearest) Helpless, because you know the other team is just a Freak of nature.

You be the judge. Either way, we are pretty sure the real winner is music.