As far as Shia LaBeouf headlines go, this one is comparatively tame. After giving a screaming motivational speech against a green screen and being raped during a piece of interactive performance art, the news that a) Shia LaBeouf has done a freestyle rap and b) that he may have plagiarized it, should come as a surprise to virtually nobody. LaBeouf’s acid-fuelled twitter account has long been the kind of stream of consciousness that naturally lends itself to freestyle rap.

If you had ever wanted to see a bare-chested and rat-tailed Shia LaBeouf try his hand at freestyle rapping; then look no further.

LaBeouf’s freestyle subscribes to the golden rule of the art that says: don’t make it too good or people will think it was rehearsed. It’s pretty simplistic, but you can tell that it is legitimately straight off his mohawked dome. LaBeouf spits some decent bars, and spits real saliva too – adding to his new redneck image. But can LaBeouf ad-lib lines that denigrate his past mainstream success at the behest of members of the cypher? Absolutely. One punter in his entourage calls out “Bumblebee!”, to which LaBeouf quickly responds, “Nah none of that, Transformers is the dummy rap.”

I personally took real notice when LaBeouf drops this heavy punchline right at the end: “Half-ass cash, you could get the fast-cash / but I got a gas mask so you know I got the last laugh.” Of course the line is so expert, because it’s not his own. Rather the lyric belongs to 90’s hip-hop group the Anomolies from their track Perfectionist. Anomolies frontman Pri the Honydark took to Instagram to call out the biting: “you can’t rip songs from my ANOMOLIES crew, recite them in a freestyle as your own, get credit for it, then not expect to be called out by ACTUAL MC’s.”This seems a natural progression for LaBeouf, rapping is one of the best vocations for a person with plagiarist tendencies. Check the whole post from Pri below: 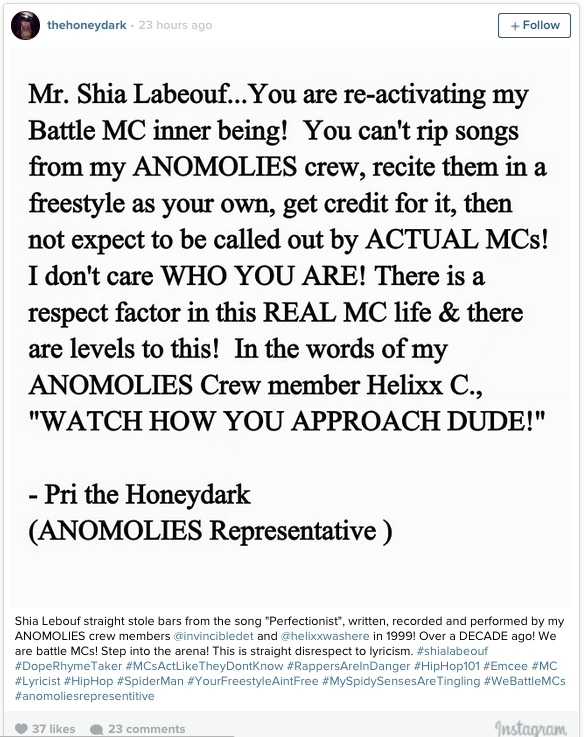