On the eve of The Grates’ first headline tour in nearly four years, I recently caught up with Patience Hodgson to talk about how she finds the time to be a new mum, a front woman and an entrepreneur.

“It’s been pretty crazy,” she says, “It’s just like BC and AD. You’ve got your previous life and then you have your current life. It’s two totally different things. You’re a mum and you’re just non-stop a mum. You just have to completely surrender to it.”

For those not familiar with the entrepreneurial spirit of Patience and her bandmate (and partner) John Patterson, they sure know how to keep busy. On top of being in a highly successful band, they also run their own label Death Valley Records and Tapes, as well as owning and operating the Southside Tea Room and Death Valley Bar in Brisbane. I asked Patience how she finds the time, especially with baby Soda now under wing.

“Everything is important, and you can multi task, you just can’t do everything at the same time,” she says. “Currently if I go out to the café or something like that I have a washing basket that I carry around, and I just put a blanket in it and if she falls asleep I just put her in that… There are some days when you aren’t going to get anything done at home, so it’s like, suck it up, put your baby in a washing basket, take it to the café.”

It is this considered and lighthearted approach to life that makes Patience so cool. But, she is the first to admit that she couldn’t do it alone. “That’s the key. You’ve got to have really good people around you. Its like … Teamwork Makes the Dream Work” she laughs, dropping the name of the upcoming tour (seemingly by accident). “They used to say it takes a village to raise a child and now I totally understand it.”

The album, Dream Team, dropped at the end of last year. It came as a surprise to many, announced only a month before its release. The band turned over the 11 tracks in 10 days, and made a marked return to their early garage roots. For fans, it sounds like coming home. And for the band, it’s not so different.

“When we recorded the last album it was insanely isolating because we were completely out of our comfort zone in the States. Now we have returned to Brisbane and we’re in our comfort zone and we have managed to find all these really like minded people,” says Patience.

This is partly in reference to new drummer Ritchie Daniels, who is also a barista at the cafe. When I ask how Ritchie came to be in the band, Patience recalls the story fondly: “We heard he was a drummer, but everyones a drummer, so we sort of just dismissed it,” she says, “We knew he was in Trouble With Templeton and he would have to take heaps of time off work, cause he is a trained jazz drummer. He would fly to all different places in Australia just to play drums with different people. So we knew from how often he left our shop and needed time off that he must be a pretty decent drummer.”

But it wasn’t just about his skill. The thing that I am starting to understand from our brief conversation is that The Grates don’t just recruit staff, or band members or videographers. They recruit members of their tribe. People who they enjoy to be around that contribute to their little network through a symbiotic exchange of talent and friendship.

“With Ritchie we had been working in the café for a year, and what you do when you’re working in a café is you listen to music… It’s like with John and Alana and I in the beginning where you would send each other mix-tapes and crap like that… I can’t imagine a scenario ever again where you get a new member of your band, and you’re just able to listen to hundreds and hundreds of hours of music with them. By the time we started writing music together we had this friendship and we had all this music under our belt.“

The band will debut their new line up and new tracks at Splendour in the Grass, before heading off on the upcoming three stop east coast tour. The tour really does give credence to its name, furnished by the web of people that make up The Grates team. Owen Penglis from Straight Arrows, who produced Dream Team, will play bass as well as perform with his own band, along with Pleasure Symbols who currently record under Patience and John’s house.

Patience comments that some of those close to herself and John are worried about the tour, with baby in tow, but she shrugs it off. “I don’t think it’s going to be that much of a big deal at all.”

And why should it be? Musicians take babies on the road all the time, but it is an interesting insight from the performer: “The difference is that heaps more men are in bands than women so you don’t really see it or hear it or talk about it that much because it’s always the dude on the stage with the mum and the baby with headphones on side of stage,” she says “and even though his family is there, people aren’t really paying them any attention. But this is just one of those less common situations where I am the front person, but I am also a lady and I have a baby so it’s more upfront.”

She does admit the maternal instincts have kicked in when she thinks about Soda watching on: “I just have this new part of my brain that has opened up as a mum where I’m like, fuck I hope she’s ok!”

It will be the fifth time The Grates have performed at Splendour with stellar moments over the years, from the whimsical flood of balloons in 2006, to the batman costume of 2008. Looking back, Patience reminisces on her favourite Splendour moment. 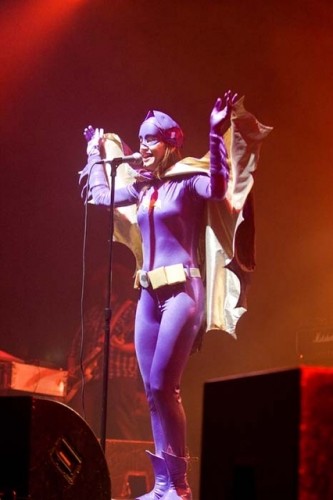 Patience at 2008 Splendour in the Grass

“What happened was there was some problem with the gates, for some reason people weren’t getting into the show. We went on stage at I think 12 or 12:30 and there was absolutely zero audience and they were like, you have to start playing, we have a full day of line up and you have to play, you’re like the first band on, no one gives a shit,” she says, “So we started playing to a completely empty tent, which was weird. Then all of a sudden the gates must have been opened, and we were 3 songs into our set and all of these people started running towards the big top. They were just running from the back of the tent towards the front. And it was just a weird thing to see, it was awesome. That is definitely something I will never get out of my brain.”

The question on everyones lips is, what treats the band have in store for fans this time around?

“What you can expect is something totally romantic. That’s our plan,” Patience hints.

The band have been working in collaboration with 16 year old Tia Toilet, who directed the captivating Call Me video, to design the visual show (and surprise, surprise, she also worked at the café!). “Her thing is that she is all about romance, so we will get a romantic stage set up happening”

“And then I have these insane coats I’ve been making with my friends,” Patience tells me, “I have just been going around my house decluttering, taking all the crochet flowers, and plastic flowers, and plastic animals and bamboo elephants and any crap that I can find from around my house… and pom poms from our wedding… and gluing them all over these coats and they look out of control.”

“We’re going to make one for each show,” she says, “My plan was to just throw them into the audience at the end of each show but now I’m not sure I want to because there is just so many memories all over the coats and I am just looking at them thinking, I don’t know if I can do it.”

Images spring to mind of these elaborate creations, and I get a bit excited about seeing them come to life. I, like many others, can’t wait to see Patience and her technicolour coats of memories take to the stage again with The Grates at the upcoming shows. As pioneers of a sound that took Brisbane to the international stage, it will be a very warm homecoming.

You can get tickets to the Teamwork Makes the Dreamwork Tour here, and can buy the Dream Team album here.