Fresh off the plane from a whirlwind appearance at Japan’s 24 hour Taico Club festival, we caught Danny Harley, aka The Kite String Tangle, to chat about his collaboration with folk-pop delight Dustin Tebbutt on the single Illuminate, released in late April 2015. With a glistening core steeped in TKST’s distinctive, warm synths, Illuminate is a beautifully produced, melodic piece of electropop, with a rich, layered soundscape and a dreamy emulsion of both Harley and Tebbutt’s choral vocals. On the back of the single, the two have also announced an East Coast tour in June (Illuminate LIVE) as well as a set of limited edition 10″ vinyl splits featuring the gorgeous cover art of Leif Podhajsky and two additional songs, where each artist covers one of the other’s tracks (you can hear a sneak-peek of TKST covering The Breach on the artists’ Facebook pages).

After chatting way back in December, in this interview Danny gave us an update on his experience collaborating with Dustin: what it was like to build Illuminate from “the ground up”, the balance of holding your own creatively and being open to the creation process. Danny also talks to us about what they have planned for the Illuminate LIVE tour, wanting to have a female support act (Brisbane’s gorgeous pop ingenue JOY), who he really wants to collaborate with and his upcoming trip to visit the Northern Lights in Iceland.

As always, a delight to speak to one of Australia’s most exciting electropop artists and celebrate a collaboration that – we hope – isn’t over just yet.

Hi Danny, how’s it going? Are you back in Australia?

Hey there! Yeah I got back yesterday. Things are pretty good, cruisey, I’ve just been tinkering away.

You were just in Japan for the Taico Club Festival. How was it?

It was insane, really good. The Japanese audiences are very different – they’re super polite and attentive, they kind of watch the whole thing and then clap at the end, and they really absorb what you’re doing. It was a nice reception, and a nice mix of people who knew my stuff and people who were hearing it for the first time. It was an insane festival; I can’t believe they don’t have that kind of thing here. It went all the way through the night, it started at 2pm and went through to 2pm the next day – there was no sleeping time. I made it to about 7am but I had to be on a bus at 11am to get back to Tokyo.

That’s pretty hectic. Well, the primary reason for us chatting is to catch up about The Kite String Tangle x Dustin Tebbutt collaboration, Illuminate. Congratulations – it’s a gorgeous track and we think it brings the best out in both your sounds. You must be thrilled with the reception.

Thank you. It’s funny actually, for me it was a project that didn’t really have the pop song structure or anything immediately ‘grabby’ about it, it was just a cool track that was really vibey that I liked, and Dustin liked, and it was more about the process of creating an awesome little song that we both loved. Then when it got added to radio I was a bit baffled by it because I didn’t think it was the kind of song that would do that. I’m stoked with the reception, it’s really cool, and a testament to peoples’ music tastes in Australia that that kind of song can be added.

Actually we’d only met a couple of times before we got in a room and started producing music. I guess there was a bit of pressure to hold your own creatively, and that’s both exciting and nerve wracking. There was no real ‘bad’ option because we went into it with no specific purpose in mind. We thought, if we got something out of it, cool, if we don’t, no time’s been wasted, so I guess there wasn’t any fear of failure. We went into it completely open and went from there. I had some of the basic structure (a lot of the sounds that you hear at the start, the pittery pattery synth ambience and random sounds) laid out from something I had been working on that wasn’t right for just me alone, so we laid that out and started working on it, and it turned into what it is now. We built it from the ground up from there.

You’ve got an incredible ability to capture feelings of nostalgia and the complexities of romance through your lyrics. Can you describe some of the key themes that Illuminate aimed to capture and how you and Dustin wrote the lyrics together?

I’ve never written lyrics with someone else before so it was kind of strange because Dustin and I, having only met a couple of times, had to get into a process that we both found quite personal. So it was interesting writing lyrics with someone else for the first time. We didn’t base it on anything too close to ourselves but it was something that we could both relate to that we could extrapolate from. The theme was exploring a blossoming relationship and the start of some of the complications that come with that.

I was watching the visualiser and reflecting on how electronic music can be quite visual, even some of the words we use to describe it are visual (sparkly, glittering, etc.) and the name Illuminate is quite visual. Given this idea of the ‘visual’ side of the song, can you tell us more about the cover art and the visualiser? Were you trying to represent the essence of the track? 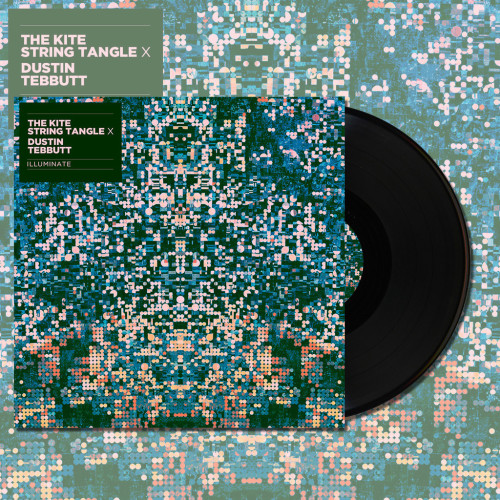 Totally. The cover art was actually done by Leif Podhajsky. He’s one of my favourite album artists and I was really stoked we could get him onboard to do the art. He did the art for Bonobo’s The North Borders and a bunch for Tame Impala, some really impressive visual art. For this particular artwork we got a whole bunch of options and Dustin and I really resonated with this one. Visually it had a lot going on which was representative of the track for us, lots of little bits and pieces and glimmery little morsels. The visualiser was something that we wanted to do so it wasn’t a static picture. Something that Dustin said, which I hadn’t really thought about, is that it kind of ‘switches your brain off’ – there’s something happening to distract you but it’s not totally engaging in a way where it distracts you from listening. It’s a nice thing to have that gets you to think about the music more.

You and Dustin have the Illuminate LIVE Tour coming up in June. I love that you’re designing the shows to highlight both your collaborative work as well as your independent stuff. Two for one, we like a lot. What do you think will be different about this tour?

This will be the first time I’m not performing solo, I’ll have a drummer with me which is cool and the first time I’ve ever done that. We’ll be doing the collaboration with my drummer, Dustin’s band and Dustin himself. It will be a fun collaborative energy towards the end of the set. You’ll have to let me know how it is!

Definitely, it will be great. Can you tell us about the choice of JOY. as your support act? (PS – check out our photo shoot with JOY. here)

Dustin and I know her from Brisbane. We both wanted a female support act to give it a balance and dynamic, and she’s pretty amazing. She does a lot of dancey stuff, and so do I, and I also do a lot of sombre stuff, so I think it’ll be great for her to be able to explore that side of things as well.

In the theme of Illuminate, we were thinking about how humans love lights, we’re attracted to them like moths to a flame. We’re going to give you a list of some of the most famous night lights in the world and you have to pick which one you want to see in person and why. The options are: a) NYE fireworks in Times Square, New York b) the Northern Lights in Scandinavia c) the Eiffel Tower at night d) heading to outback Australia and being able to see the stars and of course, e) Vivid Sydney.

Definitely lock in b) ‘Aurora Borealis’, for sure. It was my birthday a little while ago and my girlfriend got me a package to go to Iceland in a year or two – so it’s a long term project – but it’s one of those things we’ve always wanted to do. Huge goal of mine.

We know you haven’t crossed out the option of collaborating with Dustin again so we’ll definitely keep our fingers crossed for that in the future. Are there other artists you’d love to collaborate with?

Totally. I really like working with other producers and also with other artists (as a producer), so it leaves me really open to collaborate. If it was an open skies conversation I’d love to work with producer Jon Hopkins (who did a lot of work with Brian Eno), he’s my number one guy I’d want to work with. He’s got an insane grasp on sound and texture and everything he releases blows my mind.

Well it’s been a big year for you and sounds like it’s only getting bigger with your latest US tour announcement, really exciting. Good luck on the upcoming Illuminate LIVE Tour and thanks for chatting today!

Thanks – see you then!

Here are the details for the (very sadly SOLD OUT shows)