“Do the fans want the feeling of A Tribe Called Quest? But all they got left is this guy called West.”

Kanye West gets a pretty bad wrap these days. He is depicted by the media as a selfish, egocentric jerk, who enjoys belittling paparazzi, flaunting his self worth and making the world cringe as he throws verbal barbs at Beck. To me, Kanye West will always be a musician first and foremost; no matter how big he may end up within the fashion world, or how many radio rants he embarks on declaring that he is the Shakespeare and Walt Disney of our generation. My respect and admiration for Kanye is entirely on a musical level. His 2004 release The College Dropout serves as one of the most influential, monumental and personally heartwarming albums that I have ever had the pleasure of lending my ears to. Not only did it introduce me to a side of hip-hop I was unaware of, it granted me a fascinating insight into one of the most gifted musicians of our time.

This album is a stellar example of production, and introduced the trademark Kanye West sound fans have grown to love, and that the industry itself has used as a benchmark for lyricism, production and beat-making. I remember myself as a budding hip hop head in high school, getting my feet wet for the first time in the rap world. I was eager for anything gangster, unsure of how a rap song was supposed to sound, but naively I thought I was starting to get a fair understanding. 2003 saw 50 Cent’s debut Get Rich or Die Tryin’, and introduced me to a hard-hitting genre, while the work of Eminem had demonstrated a violent, angry delivery. The College Dropout changed those expectations; I began to view rap music as a chameleon, a soulful expression, a genre moulded for purpose and message. Kanye showed me the depth that the hip-hop genre had to offer, there were stories to be told, commentary to be made, and infectious sounds to be created.

It was not long after hearing this album for the first time that I became a devotee of Mr West. The iPod I still carry with me everywhere has the lyrics from the Graduation track Homecoming engraved on the back, “Reach for the stars, so if you fall you land on a cloud”, a permanent reminder of the confidence and motivation that Kanye has created in his music, and a sentiment has affected my own personal motivations and desires. In my first year of university I graced the campus with a sweatshirt emblazoned with the “Dropout bear,” the mascot that served as the icon for the trilogy of West albums that highlighted his own trials and tribulations of seeking an education. If this wasn’t dedication enough, upon my first ever Kanye West concert, I donned a Chicago Bulls jersey (I thought reppin’ his home town would somehow draw more attention to myself in the pathetic hope of being noticed amongst the sea of screaming fans in the mosh). I am rather ashamed to admit that I also brought my trusty pair of stunner shades to accompany me. If you don’t know what stunner shades are, consider yourself lucky. In hindsight, they are the optical equivalent of being a douchebag. For some reason or another Kanye was the man responsible for giving this abomination mainstream exposure, and although it made me look incredibly bizarre, I couldn’t not wear them right? What if my stunner shades were the reason Kanye invited me backstage to party with his entourage? I sadly had no choice.

Yes, I have included a photo. Yes, I look like an idiot. Yes, I am holding up the Roc Nation symbol and throwing my diamond in the sky (Illuminati confirmed). Prepare to cringe like you have never cringed before. 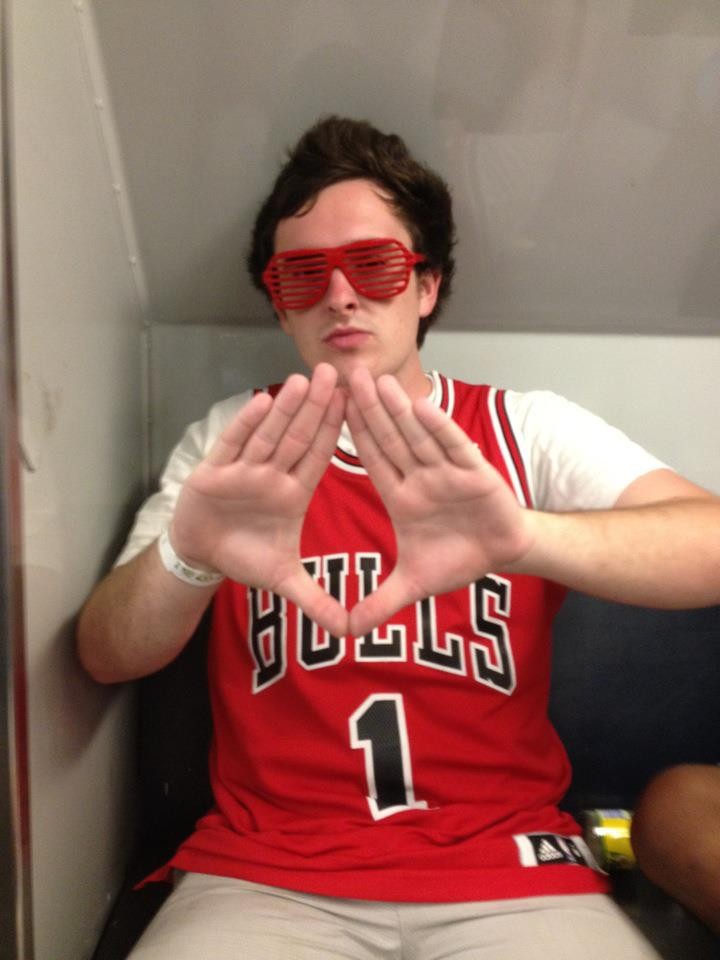 Kanye loves Kanye, sure (apparently after re-reading that last paragraph so do I). We all know this. However The College Dropout is the work of a man who has been doubted and questioned his entire life; the man behind this album is not the man we are currently accustomed to being a serial microphone snatcher, or preacher for the work of the almighty Beyoncé. It is understandable that confidence in his own work was a necessity to survive and thrive in a cutthroat industry. From the outset, the first track, We Don’t Care shows a man who has simply climbed to the top of the ladder, and who has himself been doubted every rung of the way, “We never had nothing handed, took nothing for granted, took nothing from no man, man I’m my own man”. I think this is perhaps why I have a different view of Kanye as an artist as opposed to the mainstream perception; if you have gone on this journey with him, you begin to understand the inner workings of a musical genius. It is rather fitting that the first musical introduction we get to Mr West is a song flaunting his disregard for the opinion of others; this is a man who has cemented himself as the king of not giving a fuck. If there is one lyric from this album that perfectly depicts Kanye West, it would be this, “Now I could let the dream killers kill my self-esteem, or use my arrogance as the steam to power my dreams”. As we all know, there as never been a lack of steam onboard the Kanye express.

The College Dropout is an eclectic mix of styles and genres. It is everything you could want from a debut hip-hop album. You have the iconic anthem Jesus Walks; the tongue-in-cheek club banger Slow Jamz, as well as the infectious swagger induced track Get em’ High (which also introduced me to musical genius and lyrical legend Talib Kweli, or as he is so brilliantly depicted on the album, “Talib, lyrics stick to ‘ya rib”). There is no corner of the musical world that Kanye does not explore, and only serves as an indicator of the experimental nature that he would establish on future projects such as Yeezus. Never Let Me Down is a politically charged tune that explores Kanye’s own exposure to the civil rights movement with a heart-warming insight, “I get down for my grandmother who took my mama, made her sit in that seat where white folks ain’t want us to eat”.

Amongst the stellar production and lyricism, there are two tracks that stand out to me, and they both provide two of what I personally believe to be iconic moments in hip-hop, and have only cemented the respect and admiration I have for Kanye as an artist, but also as a human being. Two of the final three tracks, Last Call and Through the Wire are as personal and introspective as hip-hop songs allow. The latter only solidifies the passion and drive behind his music; Kanye raps the entire song with his mouth wired shut after a horrific car accident. Upon first listen I thought this was a joke, surely someone is not crazy and dedicated enough to rap behind metal bars and wires? Mr West is just the right kind of crazy.

To describe Last Call as a song would be a great injustice, the track serves as more of a personal monologue, depicting Kanye’s rise from unknown producer, to personal beat maker to the legend himself, Jay-Z. Every time I hear someone criticise Kanye, I have the urge to show them this track, as it is a stark reminder that I feel is necessary, we are all human, we all have our flaws, and some of us are willing to go to hell and back to make our dreams a reality. You cannot fault Kanye’s motivation; he is an incredibly dedicated artist and has reaped the benefits of his actions, the fruits of his labour. Over twelve minutes we are treated to a full range of emotions; pride, dejection, relief, and joy. There is a genuine sense of humility on this track, and it is a refreshing notion as we now seem to have Kanye pigeonholed as a character of the media, or an exaggeration of the rapper we saw a decade ago.

In 2015, whenever I hear a hip-hop song that samples a soulful beat or jazz influenced hook, I immediately think of The College Dropout. This is a project that has left a lasting impression on what production should be, and the stories an album can portray. This is an album that will never leave my musical rotation, and one that has set the bar high for respected veterans and emerging artists alike. The College Dropout opened my eyes to what hip-hop could be, and also gave me an insight into a musical genius. Who else but Mr Kanye West could step into the cutthroat hip-hop world and produce a debut such as this?