Red Bull Music Academy and Boiler Room are returning for a second round of the unique Chronicles in June, following on from a highly successful launch in November last year. The Boiler Room session will be run by the incredible Ta-Ku, alongside a number of had-selected artists who have impacted the evolution of his music. In support of the Perth artist will be Jordan Rakei, HWLS and Wafia.

Hiatus Kaiyote and Taylor McFerrin took to the stage and left dance floors heaving in November, so without a doubt we can expect an awesome array of local and international talent.

Chronicles 002 marks the release of Ta-Ku’s gorgeous new EP Songs to Make Up To, which works as a companion piece with his 2013 album Songs the Break Up To. While the first work contained a yearning and a deep sense of loss, Songs to Make Up To promises to be more uplifting. Love Again, released on Soundcloud a month ago features the gorgeous vocals of JMSN and Sango and hints at a softer, more soulful sound for the new album.

Not just limited to music, Ta-Ku has a multi-disciplinary create empire to his name. Aside from running a sneaker-based Instagram account which is about to become a fully fledged clothing line, he regularly contributes to Create+Explore, a collaborative design community that celebrates travel and lifestyle culture, and feautures beautiful photography and video production, as well as co-owning Westons Barbershop in Perth.

Chronicles 002 will be a premiere for Ta-Ku’s new album in full, and promises to be one of the most exciting musical events for the year.

Watch the trailer here, and full details in the posted below: 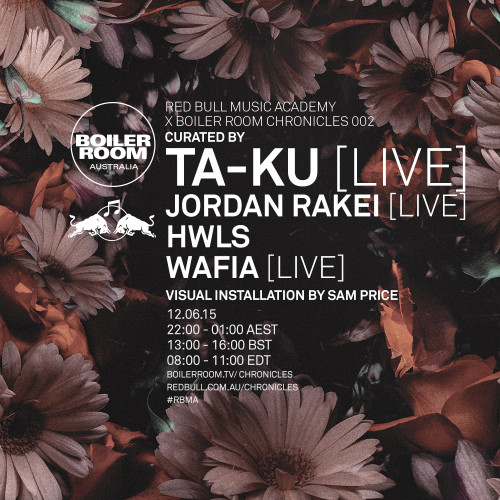