Ruban Nielson, the band leader of Unknown Mortal Orchestra, spent most of last year in a polyamorous relationship with his wife and an 18-year-old woman. Multi-Love, the band’s third LP, is billed as a concept album about that.

And with that throwaway on the title track, Nielson is pretty much done with the ‘concept’. It’s as expository as the album gets. Multi-Love is no Carrie and Lowell-esque meditation about one family, or even a To Pimp a Butterfly examination of an overarching issue. Nielson’s professions come shrouded and camouflaged in broader themes and innuendos, just as voice and melody here is camouflaged by UMO’s jungle of sound.

Listening to this band has always been a hazy, psychedelic affair. Its output has been full of hazy elongations and compressions of strange pop, purpose-built for your weed-smoking afternoon sessions. Multi- Love sees a shift to being more accessible without sacrificing the quirks and essence of what made UMO good in the first place. Strip away all that haze and I’d back Nielson to stack up with most pop songwriters. And this isn’t a new thing; take Ffunny Ffrends, the gargantuan romp of catchiness that put UMO in the spotlight, or So Good at Being in Trouble; nothing but an absolute jam off 2013’s II.

Now, have a look at this acoustic version of Stage or Screen, done for The Line of Best Fit, in the back of a London cab. The song is barely more than a snippet; an idea. But that hook – “act up, but never for stage or screen!” – is just irresistibly pure, and the ease of delivery in the cab ride shows how well Nielson’s ideas hold up without the myriad effects and wobbles the studio version gives it. The same could be said of his voice; listen to any of Nielson’s live performances, and you’ll find his high register is smooth and easy-listening, not a million miles from any decent soul act of yesteryear. On record, though, he delights in mangling and hiding that voice with all manner of distortion, effects, or simply just relegating it down somewhere lower in the mix.

As you or I can imagine, being in love with two people and having a happy relationship with them, which is then ripped apart by circumstances beyond your control, would be a harrowing experience. Nielson’s voice oozes through some kind of warped stereo, lamenting, “Multi-love checked in to my heart and trashed it like a hotel room…” It’s the first line on the album, and for another band, would set the tone for a downbeat, sombre trudge through Nielson’s deepest hopes and fears.

It’s never that simple for UMO, though. Rather, Multi-Love represents something more akin to a gleeful dig through a dusty old crate of your old records. On each track, scattergun emotions and fragments of memories whizz in and out of focus. Necessary Evil certainly sounds like something from an old crate of records. It shuffles along a retro-tinged groove. The hook, which consists of the two-word title and a woozy horn riff played by Nielson’s father, is one of the most infuriatingly catchy things you are likely to hear this year or any other.

Can’t Keep Checking My Phone finds Nielson crooning over an irrepressibly funky disco beat, but still finds him torn between pining for his absent loved one, while also wanting to spend time with the one he has close to him. On this track, like many others on Multi-Love, Nielson is a man in limbo; reflected in the kaleidoscopic effect you get as the track list progresses. The biggest curveball of the lot is actually the most subdued track here: Extreme Wealth and Casual Cruelty. Every other song has one big, noticeable hook at the forefront, but Extreme Wealth ambles along at an almost melancholic pace. Nielson mumbles (again, deliberately) but gives one of the more explicit allusions to his remarkable private life. “If we were just strangers/ then we’d fall in love again…”

It’s a comforting, and strikingly idealist, perspective of an artist playing out his innermost confusion. We all have the confusion in some form. But Nielson’s insight into his third dimension of love is something to admire; a thing of beauty that never gets too caught up in a moment to enjoy itself. 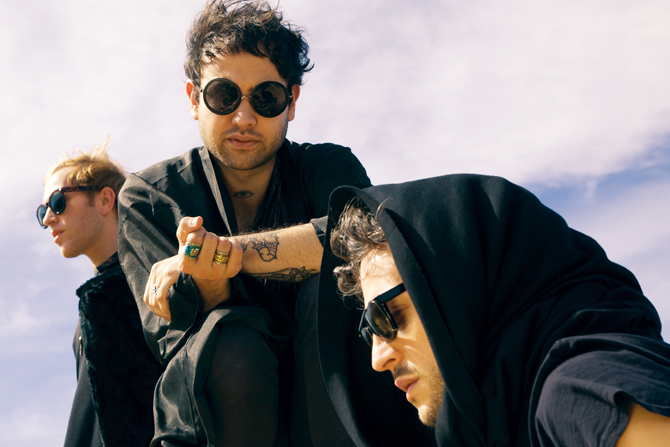 Multi-Love is out now on Jagjaguwar.