Prince has joined the ranks of those protesting against police brutality, staging a dance party in tribute to Freddie Gray, who was killed last month while in police custody in Baltimore. He also announced a new song called Baltimore, written as a “tribute to all of the people of the city of Baltimore.”

The concert, Dance Rally 4 Peace, was held at Prince’s Minnesota estate over the past weekend. Fans were encouraged to don the colour grey, to pay homage to the late Freddie Gray. Recorded in his own Paisley Park studios, the song “addresses the unrest in Baltimore and the socio/political issues around the country in the wake of a slew of killings of young black men.” Baltimore is the latest in a slew of odes to the ongoing racially charged tensions in the US, with Lauryn Hill, A$AP Ferg, De La Soul, Raury and EMA also offering up heartfelt tributes.

The social injustices that are happening in America at the moment are completely disgraceful. As a South African, who was brought up in a post-Apartheid country, I cannot fathom how this blatant racism is still happening. 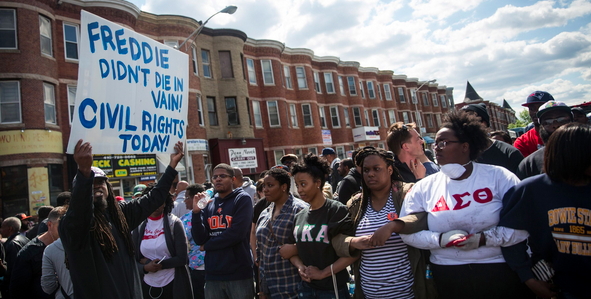 While the news is often full of the so-called barbaric acts occurring in third world African countries, society seems to turn a blind eye when the same thing is happening in arguably the most powerful country in the world. While South Africa, alongside other countries engaging in openly racist behaviour, was sanctioned and shunned by the rest of the world, America seems to slide under the radar again and again. While people are definitely talking about these injustices, that seem to have been triggered by the death of Michael Brown, in August last year, it seems like nothing is being done to stop them.

I commend Prince for this beautiful tribute show. The world needs more people like Prince, with the power to be heard by millions across the world, to proclaim their dedication to fighting racism in America and worldwide. I can only hope that in 10 years time we can look back on these incidents with the same horror that we already perceive of slavery and the Holocaust.

If the death of Freddie Gray has helped people to see the flaws in America’s justice system, then he will not have died in vain.

A release date for Baltimore is yet to be confirmed, but there is a report on Fox9.com which detailed that there are confirmed lyrics. You can see these below, and we will update as any further news develops:

DOES ANYBODY HEAR US PRAY?
4 MICHAEL BROWN OR FREDDIE GRAY PEACE IS MORE THAN THE ABSENCE OF WAR
ABSENCE OF WAR

R WE GONNA C ANOTHER BLOODY DAY?
WE’RE TIRED OF CRYIN’ & PEOPLE DYIN’
LET’S TAKE ALL THE GUNS AWAY