Outside the Staples Center in Los Angeles at 3pm on February 21 members of the Gay & Lesbian Alliance Against Defamation and other social activist groups gathered to protest the Grammy Awards and the “hate-filled lyrics” of Eminem. They warned of his “dangerous message to impressionable youth.” Helen Grieco of the California Common Cause called The Marshall Mathers LP “capitalism at its worst.” It wasn’t art, “It was hate speech.” Even the United States Congress found itself embroiled in the controversy of the white rapper. Lynne Cheney, the wife of the Republican Vice Presidential Candidate, appealed to the Federal Trade Commission to stop the record labels distribution of The Marshall Mathers LP. Violence in the entertainment industry was having a profound effect on the nations youth, she said. It was no “coincidence” that the masterminds of the Columbine massacre were fans of shock rocker Marilyn Manson. 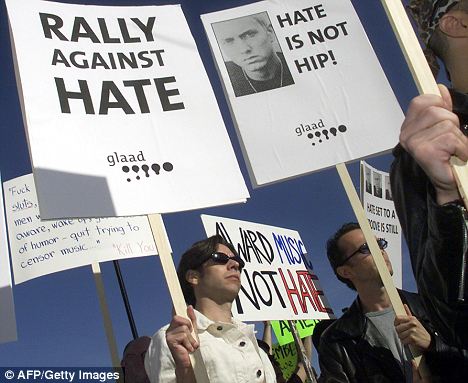 Whilst Dr. Dre and Jimmy Iovine might have entertained private hopes that MMLP would be lucrative, it’s impossible that they could have begun to imagine the extent of its success. This violent piece of comic misanthropy went on to dominate the charts. It sold more than 1.76 million copies in its first week, becoming the fastest-selling studio album by a solo artist in American music history. Eminem had made a name for himself dissing pop stars; now, he was one of them. The alluring Pandora’s Box quality of the album helped it sell more than 3.5 million copies in the first month. What did it say about the state of the American conscious when the warped worldview of Eminem was gobbled up by the masses? Was there a Slim Shady lurking in all of us?

The urban legend goes that the album was very nearly titled Amsterdam – on account of Eminem’s two-month drug and recording bender in the Dutch city famous for its “coffee shops,” red light district and so on. But the title is significant. On The Marshall Mathers LP Eminem shakes off the goofy Slim Shady persona and offers a portrait of the artist. For the album’s cover art, Eminem chose to be photographed at his childhood home. The address was the setting for Eminem’s turbulent adolescence, particularly his fractious relationship with an abusive and drug-addled mother. It was also his beginning. On his Anger Management tour, Eminem included a life-size replica of the family home as a set piece, literally inviting the audience into his world.

Label boss Jimmy Iovine noted the “Stephen King” quality of Eminem’s sophomore. While Em still shows the quick wit that made him famous, the Marshall Mathers LP is imbued with a newly toxic quality. It’s insidious. Songs like Remember Me and Amityville don’t push the album forward artistically; they seem deliberately included for the sole purpose of inspiring white-hot rage in adolescents. Murder muzak. On MMLP Eminem completely surpasses the genre of ‘gangsta rap,’ offering something infinitely more hardcore. While ‘gangsta rap’ is concerned with murder, drugs and misogyny, it’s still tied up with ideas of honour, respect and a ‘street code of ethics.’ On MMLP Eminem goes so much further – he gives us the image of a serial killer unhinged. “Get rid of that nine, it ain’t gonna help, what good’s it gonna do against a man who strangles himself?” He warns on I’m Back. How can a thug compete with a psychopath? They’re bad, but this is truly evil. Eminem blurs the distinction between fantasy and fiction. Does his real-life behaviour correlate to his lyrics? ‘97 Bonnie and Clyde might be brushed off as Looney Tunes cartoon violence, but Kim seems raw and real. Kim Mathers herself was tragically unable to make the distinction. She slit her wrists after Eminem played the song live at a concert she attended.

The idea of fame is central to The Marshall Mathers LP. Eminem came from poverty and obscurity, but money and fame have not brought him relief. Instead, the spotlight has placed more pressure on his already fragile psyche. “What do I think of success – it sucks,” he spits on I’m Back. This is an artist that scorns fame. Superstardom has made Eminem distrustful. He can’t tell whether people are genuine friends or are only interested in his celebrity and wealth. “Now everybody wants to come around like I owe ‘em something,” he says on Marshall Mathers. Record execs pressured Eminem to make the album more accessible – it needed another infectious smash to follow My Name Is. In repose, he did the exact opposite. The Way I Am is the ultimate anti-industry anthem. He refuses to bow to label pressure, and be “pigeon-holed into some poppy sensation.” He blasts the cult of celebrity and expresses abject disgust for his own zealous fan base. But for Eminem, the greatest curse of fame is responsibility.

In the wake of Columbine, everyone from journalists to psychoanalysts were quick to put the interests of Eric Harris and Dylan Kiebold under the microscope. What had worked to warp and poison the minds of these young boys? In the year 2000, commentators placed additional pressure on artists to use their influence for the betterment of society. This issue of responsibility dogged Eminem’s career.  While a copy of the Slim Shady LP was not discovered among the killers’ possessions, Eminem plays with the idea of his effect on the youth. Eminem parodies the absurd fears of the extent of his influence by taking direct ownership for the massacre. “Someone musta broke in the back window and stole two loaded machine guns and both of my trenchcoats,” he says on Remember Me. “I take each individual degenerate’s head and reach into it… and [he] becomes a puppet on the string of tennis shoe,” he boasts on I’m Back. But this is a joke. Eminem knows that in reality the influence of a pop star is limited. Em lists the real culprits for corrupting the youth on Who Knew: violent movies, the sexualisation of children, and even the indiscretions of the most powerful man in America – “you want me to fix up lyrics while our President gets his dick sucked?” He takes the idea of influence to a horrifying conclusion on Stan. A delusional fan acts out the fictional murder in ‘97 Bonnie and Clyde.

It’s a beautifully crafted album. At the height of his powers, Dr. Dre creates something sparse, stripped back, and yet still totally hypnotic and memorable. Ever the tactician, Dre puts Eminem and his mind-boggling talents front and centre. Eminem’s vocals are more dexterous than ever before on MMLP. His voice is a living instrument, shifting effortlessly between cheek and rage. In Criminal he drops 6 remarkable impressions within 10 seconds. His talent has always been in putting words to work, creating rhyme structures you wouldn’t think possible. For me, Eminem will always be the G.O.A.T on account of his technical skill alone. And when it comes to rap as a sport, Eminem has actually improved with age.

In the year 2000 Eminem boasted that he was invincible on Drug Ballad, “If I could take it all back now I wouldn’t – I woulda did more shit that people said that I shouldn’t.” In 2009 a methadone overdose almost claimed his life. In 2015 he is 6 years sober. A lot can change in 15 years. Is The Marshall Mathers LP still potent 15 years on? Is it still subversive and shocking? Chief Keef and the trap movement cannot compare to the nightmarish vision of young Eminem. Odd Future is sometimes identified as Eminem’s successor, “reincarnation of ’98 Eminem” says Earl Sweatshirt on AssMilk. But they’re only funsize. Then there’s a few novelty acts like Necro or Jedi Mind Tricks, who are easily dismissed as just that – a novelty. No, the title is still held by Eminem. It’s a natural rule of the universe that any music your parents play will sound lame, but Eminem might be the exception. The Marshall Mathers LP might still be harder and more brutal than the music of your grandkids. It’s remarkable for its craftsmanship, its vitality, energy and its bile. Dark, witty and culturally significant; it’s the greatest album of the greatest living rapper.