If there was ever a song that anyone could place within the distinctive feel of a memory, or perhaps a certain feeling, it would have to be The Eagles’ Hotel California. Despite being born almost two decades after the album of the same name was released, Hotel California, to me, perfectly encapsulates the zeitgeist of the seventies.

My first exposure to the song was driving up to Forster with my family on the then incomplete M1. It was and has always been one of my dad’s favourite songs (and for him that says a lot because he barely listens to any music). Perhaps it conjured up the carefree, laid-back attitudes of the seventies, where the hair was long and the rules were lax. For me, I can only imagine him listening to it in his beat up old orange Holden commodore, hooning down the highway, while making Puberty Blues-esque kind of trouble.

Although my first exposure to the song was via the stereotypical road trip, my real connection to Hotel California came from a much more commercial avenue. Guitar Hero, where spotty teens with warbling, crackling voices go to sing their hearts out, was where I really memorised the lyrics of the song. Never having mastered the finicky, nefarious buttons of the plastic guitar (let alone a real guitar), I was assigned the much abhorred role of singer.

Despite the flat, monotonous quality of my voice, it allowed me to really absorb the words of what I was singing. The opening lines read:

On a dark desert highway, cool wind in my hair

Warm smell of colitas, rising up through the air

Immediately you are given a perfect visual, your olfactory senses are stimulated, and without knowing it, you are transported to a highway somewhere in California. Rumoured to be about heroin addiction or Satanic worship, drummer and co-lead vocalist for the album Don Henley has said that the song was much more mundane in origin. “Hotel California was our interpretation of the high life in Los Angeles,” he said.

But one of my favourite things about this song is its beautiful and poetic lyricism. A grand, all-encompassing allegory which is as entertaining as it is a literary triumph, it wove a vivid tale about a weary traveller who checks into the fictional ‘Hotel California’, which turns out to be a nightmarish place where, ”you can check out anytime you like, but you can never leave”. It was a metaphor for the hedonistic lifestyle of Los Angeles in the Seventies; the dark underbelly of the American Dream. Something that Henley and his band “knew a lot about”.

New Kid in Town was another another one of my favourites from the album. This time it was Glenn Frey singing the lead vocals, with Don Henley singing main harmony vocals. Randy Meisner strums on a guitarrón mexicano in the background, while Joe Walsh plays the electric organ. Henley has said the song is about, “the fleeting, fickle nature of love and romance. It’s also about the fleeting nature of fame, especially in the music business.” A hazy, ambient arrangement of soft guitar helps the illustrate the recurrent theme of Californian dreamin’. 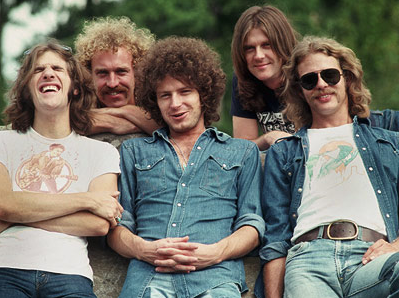 But my absolute favourite track on the album, even more so than Hotel California, would have to be The Last Resort. It details a rich meta-narrative of the great push of settlers westwards, their journey and its subsequent expansion destroying the path along the way to the very paradise they seek. It has a strong environmentalist theme, unusual back in those times of rampant consumerism and mindless development.

In a 1978 interview with Rolling Stone, Henley stated that The Last Resort was one of his favourite songs, specifically because it departed from hedonistic theme of the rest of the album to say something meaningful. In a message that still rings true today, Henley said darkly, “We have mortgaged our future for gain and greed”.

In a story about the promise of the American dream, the land of El Dorado, not everyone can be a winner. And in this case the loser is the environment. The the fourth verse is particularly effective at illustrating the insatiable greed of unchecked development:

Some rich men came and raped the land,

Put up a bunch of ugly boxes, and Jesus,

In a line which still gives me chills whenever I hear it, Henley finishes off the song with a phrase which perfectly communicates humanity’s entire relationship with the environment:

They call it paradise

I don’t know why

It is so powerful in its simplicity and eloquence, that it’s impossible not to be moved. Henley said this was the entire gist of the song, that, “When we find something good, we destroy it by our presence — by the very fact that man is the only animal on earth that is capable of destroying his environment.”

Being the last song of the album, it ends on a pretty nihilistic tone. Henley finishes the song with a long, drawn out note of resignation; the soft, melancholic howl of a falling melody to cap off it all off. I feel that this album, to me, is a testament to the power of good songwriting. You don’t have to have to biggest sound, or the most distinct. But if you are an effective communicator, and you have a story to tell, that will manifest itself in ways that will touch people no matter how much time goes on. And Hotel California, being critically and commercially acclaimed ever since its release, will continue to stand the test of time as a classic.