This year marks the tenth anniversary of the release of Guero, the ninth album by multi-Grammy-winning American arist, Beck Hansen. I didn’t have the pleasure of listening to Guero on the exact day it came out, but picked it up two months later with my dad from a mall in Coffs Harbour, on a roadtrip home from the Gold Coast. We’d been visiting my aunt and uncle who had just moved there, but had to quickly head back to Sydney when we found out that my nana had fallen ill. My mum and sister caught a plane, and dad and I had the job of driving the car. Initially I was bummed to have to endure sitting in the car for the 15ish hour drive along the M3 – but on that drive I discovered an album that I think both encapsulated all the work of one amazing singer/songwriter, and also became the soundtrack to my coming of age.

Though his latest album Morning Phase is largely acoustic and down-tempo, other of Beck’s previous albums crossed multiple genres and styles, with each track evoking a whole number of different emotions through their sounds. Guero is an album which is almost like a greatest hits of Beck’s career – with each track either coming from or predicting the sounds that he would use over the course of his 12 separate albums. For that reason, Guero became the album that a young me kept coming back to, because it was there for me no matter how I was feeling. 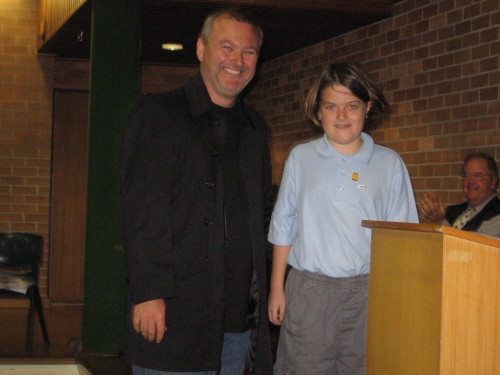 When I first listened to it, I was 11, and just discovering music that wasn’t Green Day, AC/DC or Metallica. Tracks like Rental Car and Send A Message To Her were accessible for an eleven year old me. They sounded similar enough to the music I was listening to at the time, and would continue to listen to. Drums, guitar and bass was all I needed at that stage, but the complexities of the vocal work and the rhythms were different enough to inspire me listen to other types of music. Guero introduced me to a more indie, fun sounding style of rock music that I would continue to listen to in bands like Bloc Party and Arctic Monkeys, and it only continued from there. Songs like these were also the precursor to Modern Guilt, Beck’s album following Guero, which I listened to heavily just as puberty and feelings were starting to take over.

As I moved into my teens, I came back to Guero and largely listened to the tracks that were a bit more quirky, fun and weird. Though being a teenager had its downsides, I was having a really fun time, and the music I was listening to reflected that. Qué Onda Guero and Hell Yes definitely stand out on the album as the most ‘out there.’ Beck sings, “See the vegetable man in the vegetable van with a horn that’s honking like a mariachi band” over looped horns and the sounds of the Mexican streets, as I strutted my way home off the bus on a Friday afternoon. “Hell yes I’m movin’ this this way I’m doin’ this thing (please enjoy)” as I seem way more drunk than I should be at some friend’s place whose parents have gone out for the evening and left us home alone. I found out how to party and get weird to these songs. They were a throwback to Midnite Vultures, Beck’s ’99 album, an exploration of soul, electronic and dance within his music, which I was also listening and getting very weird to at the time.

Though I’d been interested in girls my whole life, it was only around the middle of my teenage years that I actually experienced being in a relationship properly. It was short, but the feelings weren’t, and once again, I headed back to Guero to soundtrack my first serious relationship. Obvious choice Girl, was the embodiment of how I felt. I would blast it in the car and in my room whenever I could, thinking about the girl I loved. Singing along over the top of the slide guitar and 8-bit sounds, which on another note is the most unexpected but fantastic combination ever. I harmonised with Beck, he knew exactly how I felt, so excited to be where I was. E-Pro was another I kept going back to. Though it wasn’t as much about love as Girl was, it filled me with confidence, like I was doing everything right. More singing in my room, more harmonies and even learning how to play them on the guitar. The hip-hop styled vocals coupled with the harmonies was reminiscent of Odelay and Mellow Gold, Beck’s first majorly successful releases. Aggressive but subdued, all the tracks are just so wild and fun, like the times I had in the relationship were.

It wasn’t long before the relationship ended. I was a very emotional young man, and it took me quite a while to move on from it all. Beck, like he always is, was there for me. I don’t think I’ve played a song more times than I’ve played Broken Drum. Emergency Exit and Farewell Ride got their fair share of plays too, but Broken Drum is still to this day one of the most beautiful songs I’ve ever heard – and completely encapsulated how I was feeling. It was slow, drawn out and all the lyrics sounded like they were written about my situation.

“I see you there, your long black hair, your eyes just stare, your mind is turning… and when I say, fare thee well, my only friend, oh how the days go.” It was around this time that I first discovered Sea Change, Beck’s 2002 album with very similar sounds. Strings, slow drums and in my opinion Beck’s best vocal work, was all I needed to help me through that tough time.

Guero is perfect. I can’t think of another album that I’ll put on and it’ll be able to play to exactly how I’m feeling at that moment in time. It’s like the sun in the centre of my musical universe, but also at the centre of Beck’s career. I imagine that Guero was written by eleven different parts of Beck. Each part wrote a different sounding album, but all of them contributed something to Guero, even if they hadn’t written anything yet. It’s the Beck album. For me, I’ll always revolve around it and come back to it when I’m feeling the same feelings again. I’ll think about getting to really know my dad on that drive home from the Gold Coast, and realising that he’s one of the best friends I’ll ever have. I’ll think about being a goofy teenager and not taking myself too seriously. I’ll think about falling in love and being able to feel on top of the world, and I’ll think about losing that and moving on. Music always helps you to explore emotion or to move past it, but when I listen to Guero, I think about my past emotional experiences with the album as well – and it’s not only the music that helps me with anything I’m feeling, but the history that the album holds as well. It’s crazy to think that it’s only been ten years.

Thank you Guero. Thank you Beck. This is the album that I grew up to.