Yesterday the university acknowledged Kanye for his “transformative, genre-defying work.” Kanye looked happier than a kid on Christmas when he accepted the award at his much anticipated, long-awaited Graduation. Smiling from ear to ear in his traditional cap and gown, it was humbling and pretty damn adorable to hear this man, who has performed for millions across the globe, admit to being nervous. “I felt my nerves a bit, and I don’t feel that feeling a lot—the nerves of humility and modesty, when being honored. A humanisation, a reality of being recognised.” Listen to the full speech, here.

This feat will only give more credit to the phrase ‘Yeezy taught you well’ and one can only hope that Kanye will start referring to himself from now on as not only a God, but a Doctor as well. 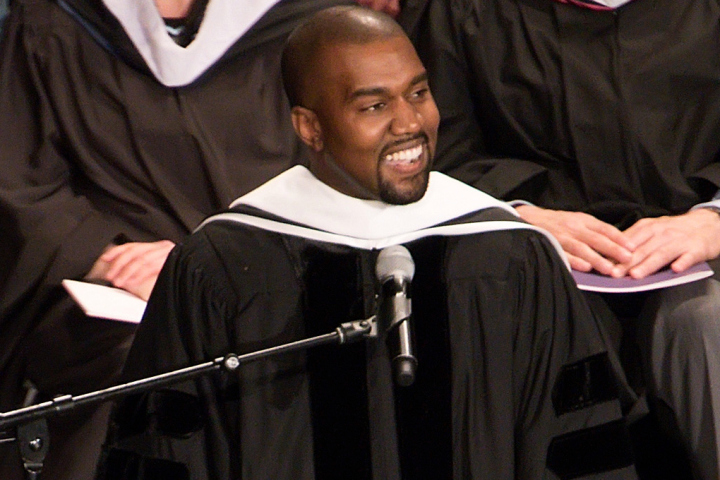 CHICAGO, IL – MAY 11: Kanye West receives an honorary doctorate at School Of Art Institute Of Chicago on May 11, 2015 in Chicago, Illinois. (Photo by Daniel Boczarski/WireImage)

The honorary doctorate from The Art Institute of Chicago is almost poetic, given that Kanye originally attended Chicago State University, but never managed to complete his degree. Luckily for him, there was no Late Registration this time around.

Kanye gave a lecture at the University the day before receiving his doctorate. Students were encouraged to ask questions, and most were interested in Kanye’s creative process as both a musician and designer. The speech was incredibly interesting, with Kanye talking about the way that people perceive rappers and how he has tried to break away from that mold. From social issues, to the colour green and Kanye’s personal style, the lecture really was incredibly informative. If you are reading this then you should definitely listen to it. You can do so, here.

In all seriousness, no matter what you think of Kanye as a person, his musical accomplishments are pretty astounding. As a long-time fan I am very proud of my boy Yeezy for finally receiving the acknowledgment he deserves. Now that he’s got a degree, who knows what he’ll do next. #yeezy4president