If the name Twin Peaks makes you think of an American television series from the nineties, and not the Chicago garage rock band then you have your priorities all wrong.

Twin Peaks are arguably the most promising young guitar band in the States right now, and over the past two years they have been doing amazing things. Known for their insanely energetic live performances, they’ve revolutionised the Chicago DIY scene and have recently been able to tour America and Europe.

We talked to lead singer Cadien about his home city, how to throw a great show and what it’s like to start out as a band when your fifteen years old.

You guys just played at the Dr Martens showcase at South by South West last month and were hailed as a stand out performance, how was it playing at such at an important festival?

It was fun. It’s exhausting because we did like ten shows in like four days, five days, but we just had a blast. It’s always exhausting but like you gotta get down and party all week.

Was there anyone that you were particularly excited to play with?

Um yeah a lot of homies like uh… I just smoked some pot so my brain won’t be on its best behaviour. Um, it was really cool there were a lot of Chicago guys coming back down here and a lot of bands who haven’t been down for their first year. That was kind of exciting, seeing like a lot of people doing their first time on our third time so we had a better idea of what to expect than them…

They put on a huge showcase with all the Chicago bands on the Friday night and yeah it was sweet. There were like fifteen Chicago bands playing at the finale and it was really cool.

Chicago seems to just constantly pump out awesome artists, people like Chance the Rapper, Kanye West, Vic Mensa, what do you think makes it such a great city for musicians?

It sort of has a history of always being an artistically cultural city, especially if you look at blues and hip-hop. It’s always been here and now its able to shine more.

In the last ten years or even five years it’s grown massively because we have a history but we didn’t have industry before, so it’s not like LA or New York it’s like not even on social media. It’s just that it can expose a lot more, and it’s a more gratuitous city I feel in a lot of ways. I think due to the lack of industry out here there’s a really good community, and people aren’t very competitive about it. Everybody supports each other.

Do you think the city had an important influence on your band’s style of music?

Absolutely. You know, we would always go to shows and we started going to DIY shows when we were like freshmen, so fourteen, fifteen. I don’t know, there were a lot of bands that were influential to us in sound and in attitude, there’s a real kind of happy fun rock garage crowd out here. So we were around that, we were doing our own thing but it was certainly the same. 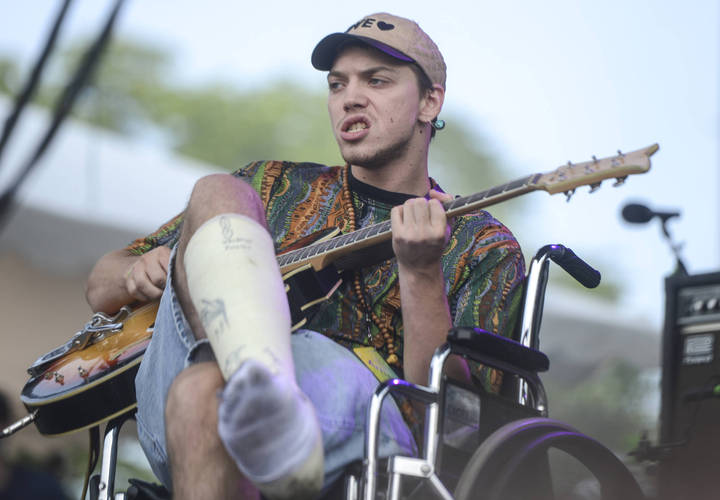 Yeah because you guys started out really young didn’t you, around the beginning of high school. Do you think that made it harder to be taken seriously, or made you have to work harder?

Yeah totally, I think that both of those restrictions made us work harder. We would connect and get those basement shows when we were like sixteen so we were like little teenagers doing a big show. We were underage to drink and anything like that.

But it’s cool in the last couple years seeing the Chicago DIY scene. It was probably already there but it does feel like, especially with all the bands that we play with, that the shows all have a lot more of a diverse crowd and just have lots more of a following growing out here.

Cool, do you have any advice to other young bands?

Keep working on your passion and don’t be afraid to put it out there. Work really hard.

Also I know that you were largely a DIY garage band in the beginning, do you still manage to any of those smaller DIY shows now amongst your touring schedule?

We do, it’s not as often I mean that used to be all we did but you know we did a couple when we were over in the UK, we did one in Chicago last year but… Yeah, we still do it.

Do you prefer the bigger shows or those smaller, more intimate ones?

I kind of prefer our shows, it’s a lot more fun, it’s intimate. I don’t love the distinction of the stage and the audience so I like when everyone’s right there. I guess it’s good to be able to have everybody be able to see a band but it’s kind of a different show. It’s a lot more conducive (playing to a smaller crowd) you’re having a good time and you’re just right there with the crowd.

Yeah, you’re known for having quite rowdy, high energy shows, what in your opinion makes a Twin Peaks show so special?

Shit man, ask the fans. I couldn’t tell you but we always have a good time, and it feels like people can tell. I don’t know that’s the vibe I get when people come up to us after a show. We’re just very enthusiastic and we have a great time. We love doing what we’re doing.

So is it important to you to have that same level of energy regardless of whether there were five people or thousands of people?

Yeah, I mean we just have a good time playing our songs, trying to make everybody dig it.

You’re playing at Lollapalooza in July and August this year, that must be exciting.

Yeah kind of, it feels like we’ve had a cool run. Two summers ago we did Riotfest and this summer we’re doing Lola so it’s been a pretty awesome run of festivals for Chicago in the last few years. It’s kind of stepping stones and it’s really exciting.

You’re also gaining quite a large following these days, over the past few years how have you guys dealt with the new level of fame?

Um you know I don’t think it fazes us too much, we just have to keep doing what we want to do with it. We all hang out with people all the time anyway so it’s kind of the same thing, it just now includes the audience. So… yeah it’s chill.

Have you had any awkward interactions with fans being a bit too keen or any funny stories?

Oh man I don’t know, I wish someone else from the band was on the phone because I can’t really think right now. I don’t know man I just try to look at the good side so it’s just been a lot of good experiences on the road, but I don’t know, I’m not good with stories I guess (laughs).

No that’s alright! Has there been a particular moment in your career that really stood out as making you feel like you’ve kind of made it, or that’s been really satisfying.

Um, well I don’t ever feel like we’ve made it because we always want to do better things and you know you grow everyday. But I’m certainly happy with my life, where I am right now.

But it’s just been the whole time really exciting and cool, and things grow. I never thought we’d go to Europe, never thought we’d get to go to Mexico city, we get to travel all over. There have been all sorts of things that are weird opportunities that wouldn’t have come up as they do and it’s really awesome to get to do that shit. I’d feel like I’ve made it if I could come play in Australia.

Yeah you should, that would be awesome.

What are your plans in terms of tours over the next few months, obviously other than Lollapalooza?

Well we’re on the road all of May going out to both coasts, got some festivals out the interstate. Just keeping busy, and we’ll see what else gets added. Hopefully come to Australia.

Cool well thanks for chatting!