Back in January, Marvel Comics announced that they would be paying tribute to Run The Jewels (click for our interview with them) by way of dedicating two comic books covers to the rap duo. The issues are Deadpool #45 and Howard The Duck #2 and the cover artwork is as follows: 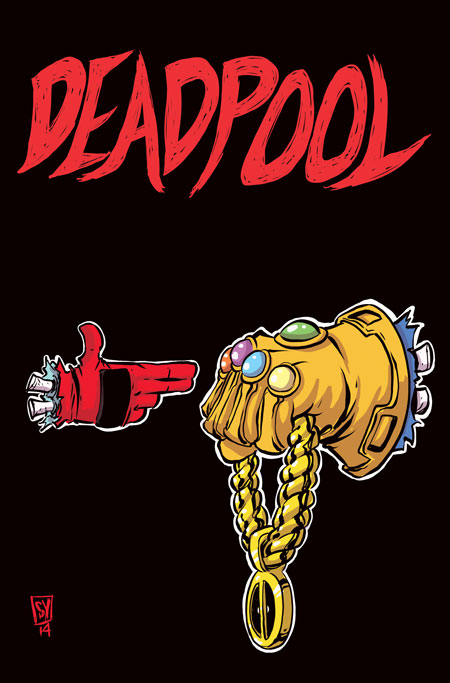 The particularly good news is that these issues are now available. They can be purchased online or from your local comic book store (although I recommend checking online first.) I believe they’re only about $10 each, which is a helluva lot cheaper than your average merchandise.

The pair, El-P and Killer Mike have both expressed affinities for comic books and superheroes, both in interviews and lyrics throughout their songs. So this is a pretty damn cool honour!

The news was first announced on Rolling Stone. Marvel’s editor-in-chief is Axel Alonso, who became aware of RTJ after attending his son’s football game:

“He caught a touchdown pass that won the game. And on the sidelines, he took off his glove and he pointed at it and his friends were going “Run them jewels fast,” quoting the chorus to Close Your Eyes (and Count to Fuck). “Seeing the way that my 11-year-old son and his friends were improv-ing off of this really vibrant, iconic image… It got me thinking. If you’ve got this movement around the world from Bangladesh to Taiwan, people are doing their interpretations of this logo, and I got these roughnecks doing it on the sideline of a football game… Maybe Marvel could weight in on this and have some fun.”

“We’ve done homages to album covers in the past, of iconic rock bands and hip-hop bands, but this is something a little different. This is very much picking up on something that’s of the moment, and a logo that I think says a lot to a lot of different people.”