Rapper Waka Flocka Flame has cancelled an upcoming gig at the University of Oklahoma in response to a video posted online, showing members of the fraternity Sigma Alpha Epsilon singing a racist jingle.

The video shows fraternity members singing about how African Americans would never be allowed into the fraternity. “There will never be a n**** in SAE… You can hang him from a tree, but he can never sign with me,” they sang.

The video went viral thanks to equal rights organisation Unheard. Watch here if you must.

Waka posted a passionate note to Instagram expressing his disgust and disappointment in the group. 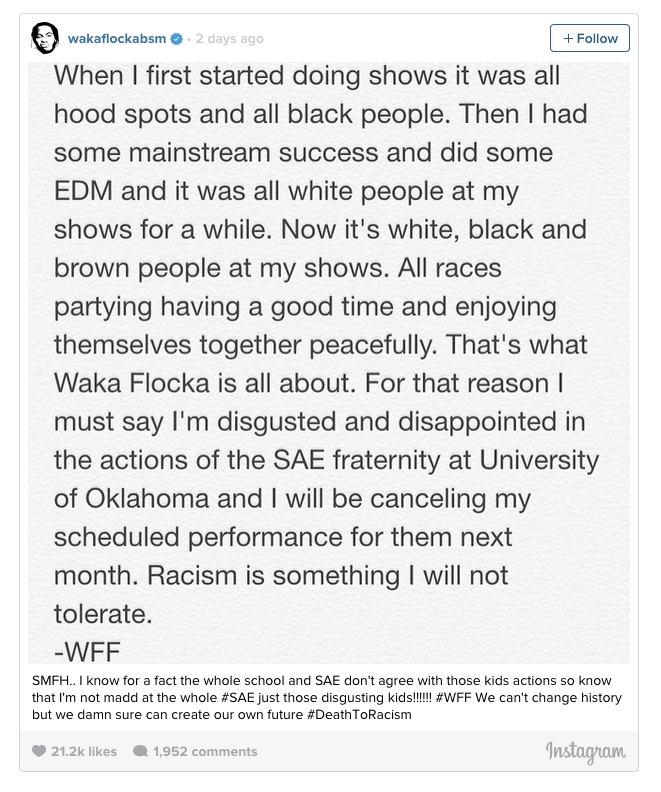 It’s terrifying and disgusting that there are still people – especially young people – like this in the world.

The University has since announced that they will be severing all ties with the fraternity. Two students were expelled and one issued an apology. There have also been student rallies outside the now-closed fraternity centre.

It’s not all bad news though (kinda.) Now that the frat has been shut down, staff members including African American chef Howard Dixon are out of work. An online campaign has been set up on Indiegogo, and has currently raised more than $57 000 to support him now that he’s unemployed after 14 years.