Ever have an interesting tidbit or musing on the plane that you simply had to write down? Nick Cave did. He had a few actually. Enough to warrant compiling them all into a published work, which you can actually purchase.

That’s right. On the flights of the Nick Cave & The Bad Seeds North American tour in 2014, ol’ Nick scribbled down a bunch of notes that soon “grew into a restless, full-length, epic poem, seeking out the roots of inspiration, love and meaning.” Is anyone else not surprised by this classic example of all that is Nick Cave? 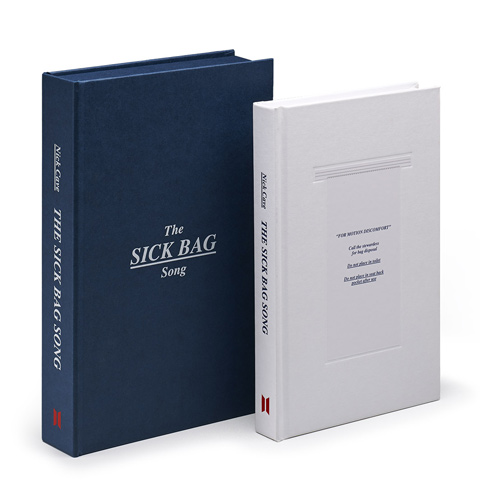 Apparently lying “somewhere between The Wasteland and Fear and Loathing in Las Vegas,” aptly titled The Sick Bag Song will be available in two different packages: the Unlimited Edition and the Limited Edition. The Unlimited Edition, published on April 8th, gets you the boxed hardback edition of The Sick Bag Song, an audio download of Nick Cave reading the book (the perfect soundtrack to fall asleep to in my opinion) and the eBook, all for £30.00 (roughly around $AU58.00). The Limited Edition however, is published on June 4th, and gets you a sick bag signed and personally customised with notes and drawings by the man himself, as well as a signed and numbered special edition of the book, and a limited pressing of Nick Cave reading it on a white vinyl double LP. That option costs a casual £750.00, or $AU1,443.00.

Seriously, this is a real thing. You can preorder your copy here, or if you need anymore persuasion you can watch the trailer below. This has just left me scratching my head.