Like many others, I discovered Montaigne, the Sydney-based 19-year-old beauty, last year with her incredible debut single I’m a Fantastic Wreck and I Am Not An End. Her vocal delivery, her quirky-sounding personality and her refreshingly ego-free, relatable lyrics really caught my eye (and ear).

Having initially been found through Triple J’s Unearthed High in 2012, Montaigne took a break to finish her HSC before setting out to record her debut EP. Life of Montaigne was met to critical acclaim, and she’s quickly built up an increasingly large fanbase ever since. Not only was I Am Not An End was, insanely, the 36th most played song on Triple J last year but she blew us all away by her Like A Version last year, where she bravely, and beautifully covered Sia’s Chandelier.

Following support slots for San Cisco and Megan Washington, topped off by an FBi Radio SMAC Award  for Next Big Thing, she’s also sung backing vocals  on Benevolence Riots by Gang of Youths, one of my absolute favourite Sydney acts. I’m also pretty certain I saw her walking around at Falls Festival Byron about six times, I hope she doesn’t think I was stalking her. How awkward. 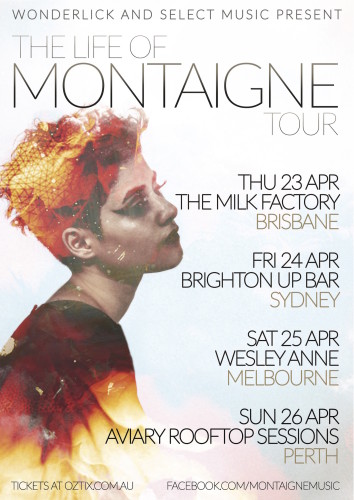